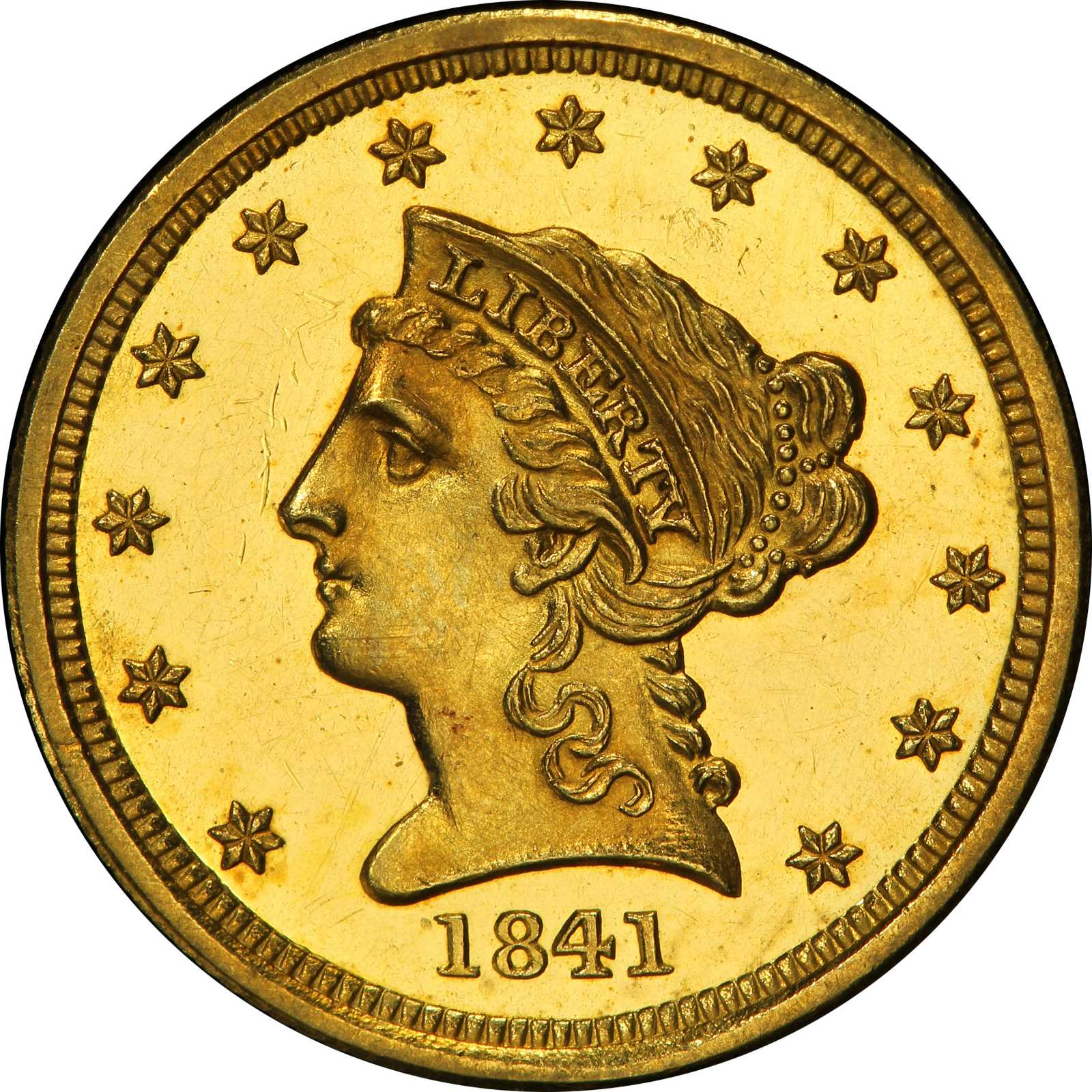 1841 Liberty Head Quarter Eagle. John Dannreuther-1, the only known dies. Rarity-6+. Proof-64 Cameo (PCGS). CAC. An elegant jewel, a majestic example of the most famous Proof quarter eagle. Struck only in Proof format, this date has vexed date collectors for generations and along the way, picked up one of numismatics most picturesque nicknames: The Little Princess. The Pogue coin displays full mirrors on both sides, rich and reflective, evenly toned a lively and undespoiled deep yellow gold. Some additional coppery toning adheres to central design elements on both sides, suggesting this coins originality. The devices are frosted and offer strong contrast to the fields, each side as nicely cameo as the other. The rims are clean and crisp, with no wire rim or fin visible on either side. Some scant hairlines are visible, more on the obverse than reverse but not alarming on either side. A minor horizontal abrasion is present on Libertys chin, and a few very tiny contact points line up nearly vertically in the upper left obverse field off Libertys nose. A spot of coppery toning is present on Libertys throat parallel to the oxbow of Libertys curly fallen lock. A thin hairline runs parallel to the top of the eagles wing on the reverse between the first S of STATES and the tip of the eagles beak. This is a very pretty little coin, one that stands out among the population of this cherished rarity. Despite the fact that these are all struck as Proofs, not all 1841 quarter eagles are particularly attractive, and very few look anything like this one. Of the census of roughly 15 known survivors, only the Mint Cabinet coin at the National Numismatic Collection of the Smithsonian Institution is considered finer than this one. Only three of the privately held examples listed in John Dannreuthers remarkably thorough census grade Proof-60 or higher: this one (finest), the coin from the Davis Graves sale and 1976 ANA sale (NGC Proof-65 UCAM), and the Wolfson-Bass Duplicate (PCGS Proof-60). All other survivors are impaired, ranging from the Lilly coin (raw at the Smithsonian, Proof-55 according to Dannreuther) to the charming Hydeman coin graded Proof-8. PCGS has graded only three specimens in all grades: this one, a Proof-60, and a Proof-53. With no circulation strike Philadelphia Mint quarter eagles produced - and no 1841 Philadelphia quarter eagles listed in any Mint reports at the time -- this issue has always had an elegant historical mystique. The focus of this issues interest overlaps with the importance of this choice Proof specimen: why is nearly every known example circulated? It seems unlikely that any were struck specifically to circulate, as the Mints bullion controls would make the subtraction of the necessary gold from one side of the ledger not balance with mintage figures on the other side. Proof coins, however, were coined by a different department and not listed on mintage reports, as their metal did not come from the standard bullion fund. Dannreuther suggests that it is possible that a significant proportion of the 1841 quarter eagles were struck for one Mint customer who then distributed them at an event to non-numismatists - folks who spent them instead of saving them. This example came from an 1841 Proof set located in England before 1933, the year of Waldo Newcomers death and the terminus ante quem of his acquisition of this coin. Only three or so 1840 and 1842 quarter eagles are known in Proof, suggesting that perhaps that was the typical demand for gold Proof sets in this era. That figure circumstantially supports the reason that only three Proof-60 or better examples of the 1841 quarter eagle survive outside the Mint Cabinet. As for the others, your cataloger wonders if they werent distributed as prizes or gifts by a single generous benefactor to the demographic most likely to spend them: children. Abe Kosoff anointed this much-beloved issue with a childlike nickname: The Little Princess. While more numerous than other Proof quarter eagles of the era, its legend and historical importance surpasses those delicacies. This choice specimen is unsurpassed among the survivors and comes with a provenance that matches its quality. If there was ever a Hall of Fame for advanced collectors of rare United States gold coin, the owners of this coin would make a fine debut class of nominees: Newcomer, Boyd, "Bell," Eliasberg, Bass, and Pogue. From the D. Brent Pogue Collection. Earlier, from A.H. Baldwin and Sons of London as part of a complete 1841 Proof set to Burdette G. Johnson; Johnson to Wayte Raymond ($1,000); Waldo Newcomer Collection, before 1933; B. Max Mehl to Col. E.H.R Green Collection ($1,200); F.C.C. Boyd Collection; Numismatic Gallerys (Abe Kosoff and Abner Kreisberg) sale of the Worlds Great Collection, January 1946, lot 108 ($6,000); Jacob Shapiro a.k.a. "J.F. Bell" Collection; Numismatic Gallerys (Abe Kosoff and Abner Kreisberg) sale of the "Memorable Collection" (i.e., Jacob Shapiro, a.k.a. J.F. "Bell"), March 1948, lot 101; Louis E. Eliasberg, Sr. Collection; Louis E. Eliasberg, Sr. estate, 1976; Louis E. Eliasberg Jr.; our (Bowers and Ruddys) sale of the United States Gold Coin Collection, October 1982, lot 117; Harry W. Bass, Jr. Collection; our (Bowers and Merenas) sale of the Harry W. Bass, Jr. Collection, Part III, May 2000, lot 105. 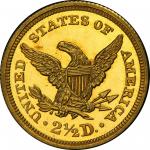