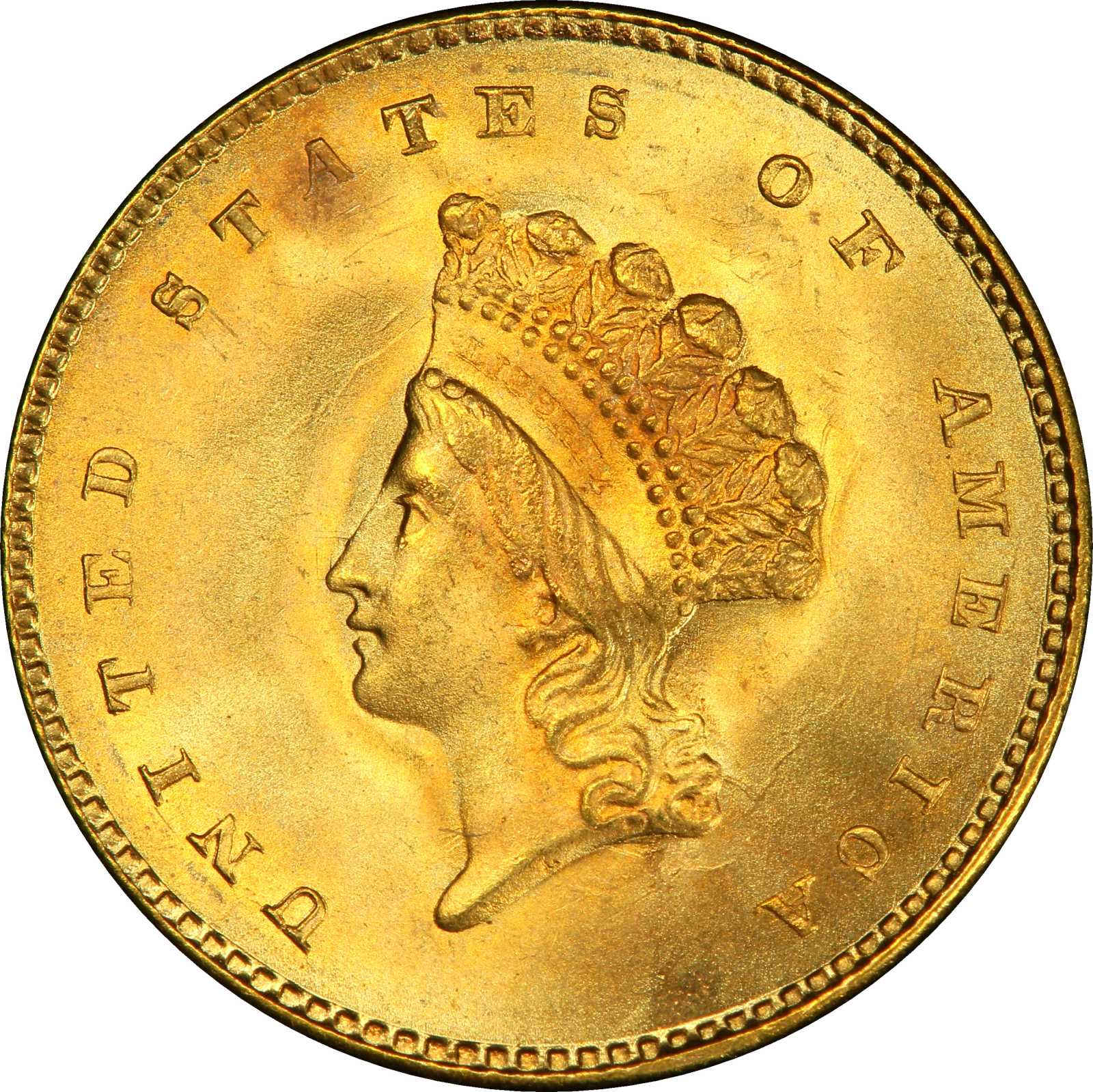 1855 Gold Dollar. Type II. MS-67+ (PCGS). CAC. This Superb Gem 1855 gold dollar borders on pristine. Frosty surfaces are fully lustrous and display warm golden-orange patina with blushes of even more vivid reddish-rose iridescence on both sides. Sharply struck overall with only a trace of faint clash marks (as made) in the fields around the central design elements.When the Act of February 21, 1853 was passed, its intended purpose was to return subsidiary silver coinage into circulation by reducing the weight of those denominations enough that their face value exceeded their intrinsic value. Huge quantities of the lighter coins were produced, so much so that by 1855, the law had basically achieved its goal. The gold dollar was created to help fill the void formed by the disappearance of silver from commerce, and as more and more silver coins circulated, the need for the gold dollar began to drop. Production figures fell accordingly; in 1855 only 758,269 gold dollars were coined at the Philadelphia Mint while the three Southern branch mints turned out well under 70,000 pieces combined. Once silver quarters and half dollars were frequent sights again, the tiny gold dollar was no longer a desired coin. The high relief of the Type II gold dollar caused problems when the pressure required to strike up the design also put undue stress on the thinner planchet. This caused the centers of the coin to be very poorly struck; in fact nearly every known example of the 1855 gold dollar is found with weakness at the 85 in the date and LL in DOLLAR. Even on specimens struck from fresh dies the 8 in the date is often very flat at the upper left portion of the top loop. This issue is particularly well known for being generally poorly struck and clashed dies are the rule rather than the exception. The designs technical difficulties proved to be its undoing and in 1856, a revised version with a larger bust designed in lower relief was introduced.The high relief also proved to be detrimental in circulation, as the obverse was quick to show signs of wear, making Mint State examples particularly elusive. Maybe about a fifth of the estimated 5,000 to 7,500 survivors qualify as Mint State, of which only a couple dozen are at the Gem level. As the sole finest known example graded by PCGS (with a single similarly graded example reported at NGC), this coin is among the finest known for the issue and for the entire type. This is a superb candidate for a Registry Set collector or anyone seeking only the best example of this type. From the D. Brent Pogue Collection. Earlier, from Heritages sale of the Pearl E. Pemberton Collection, November 2007 Houston, TX Signature Auction, lot 61493.