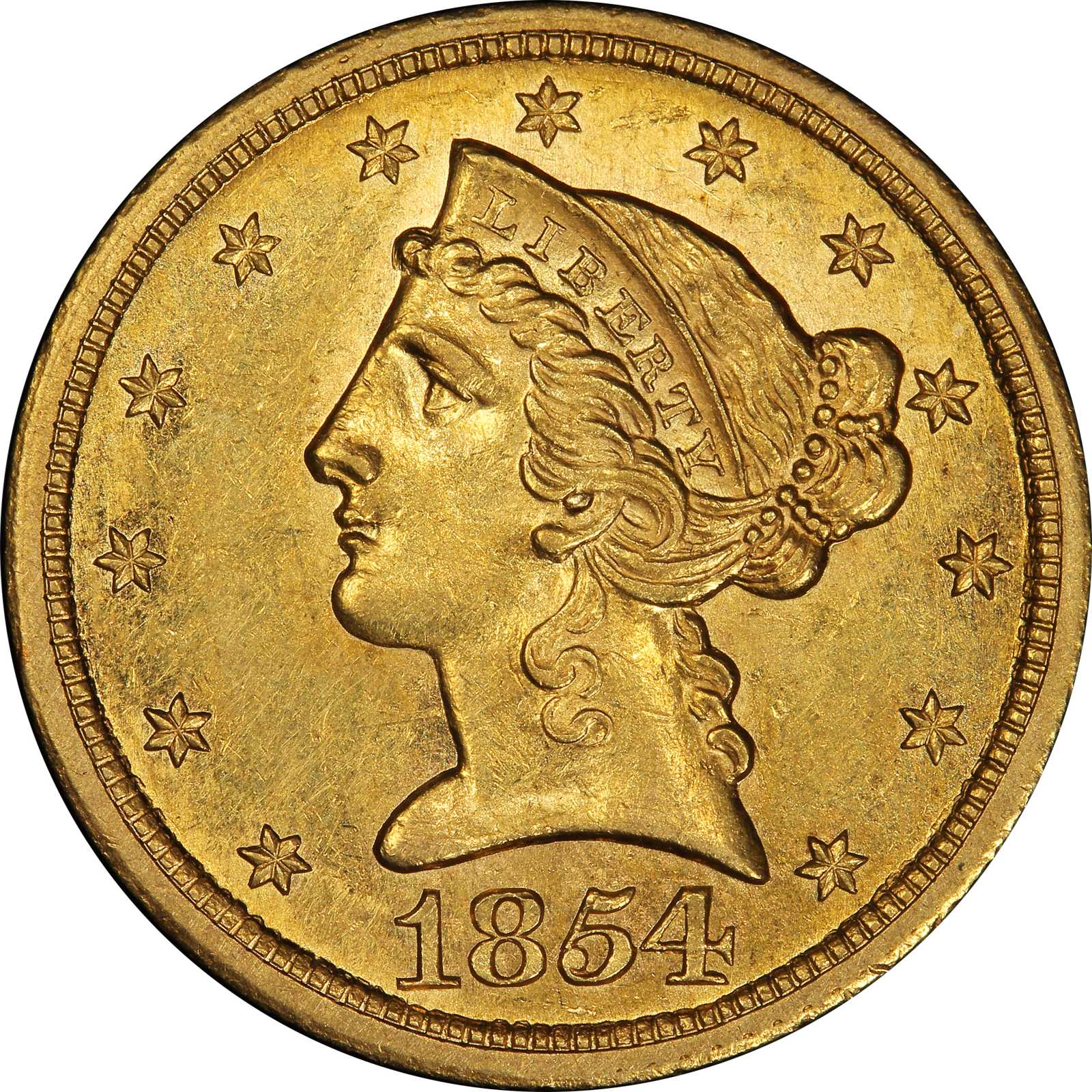 It is exceptional that a coin with a legend as large as this has the visual appeal to match. The 1854 San Francisco half eagle commands respect that surpasses other giants of numismatics. Never promoted or ballyhooed, never placed at the center of a dramatic narrative that reeked of showmanship or marketing, the 1854-S half eagle brings its own resume to the pantheon of the greatest rarities of American numismatics: ultimate rarity, decades between offerings, and conspicuous gaps in the greatest cabinets ever formed where this issue ought to be found.

When those greatest cabinets are discussed, none surpasses Eliasberg for completeness and, particularly for the gold portion of the cabinet, for quality. This coin represents the Platonic ideal of the Eliasberg gold collection: the presence of a legendary rarity rather than excuses for its absence, spectacular freshness and unsurpassed quality in preference to coins that hover beneath the ultimate tier of quality.

This is the finest known 1854-S half eagle. Neither of the other examples confirmed to exist comes close. Its surfaces are lustrous and bright, with freshness of metal seen in protected areas of the obverse and across the reverse that can be neither recreated nor mistaken. Both sides are somewhat reflective. The obverse cartwheel is unbroken, suggesting a coin that has resisted the perils of circulation. The reverse cartwheel is resplendent and complete, richly abloom as it looked within the granite walls of the San Francisco Mint. Both sides display the rich sunlit yellow familiar to those who have seen Eliasberg coins, even and bright, untrammeled by ill-advised efforts at improvement.

The strike is bold and well centered, defining each denticle on both sides and full delineation of the finer recesses and reliefs of the devices. A wire rim or fin raises around the reverse, highest at the bottom of that side. A die clash shows the outline of the central obverse device in the basined fields of the central reverse. The obverse shows some hairlines, more responsible for the grade assigned than any real wear, but the reverse is substantially free of them. Marks are few and minor, but given the perils of relying on photographs for provenance purposes, we will catalog every one of them. A thin hairline scratch crosses the throat horizontally from the lowest curl and extends into the lower left obverse field. A few slight chatter marks are present on the bridge of Liberty's nose. A dull horizontal mark is present on the 4 of the date on the vertical just below the crossbar. Between stars 7 and 8, a diagonal nick is noted. On the reverse, E D of FIVE D host several small marks and related chatter, and a light abrasion is noted in the field above FI of FIVE. A curlicue mark is present in the upper field between the beak and the first T of STATES. The rims are clear and the reeding is bold, dividing the unworn peaks from lustrous valleys between. The absence of lapping lines within the reverse shield suggests not only this coin's early die state, but the remarkably low overall mintage of just 268 pieces.

This is the first half eagle struck at the new Federal mint in San Francisco, produced on the second day after coining operations began. After the discovery of gold at Sutter's Mill, both private and public interests moved quickly to convert the new riches into a usable, transportable form of wealth. Bars or ingots were preferred for long-distance shipment of high value deposits, but gold coins served both in the expanding local economy and in commerce beyond San Francisco. The new locally produced private coins began turning up outside of the gold regions by the summer of 1849, when the New Orleans Picayune reported seeing a new coin that was "about the size of a $5 U.S gold piece, but it is not so handsome." The new private half eagle seen in New Orleans, coined by Norris, Gregg, and Norris, was valued by the Philadelphia Mint's assayers at values ranging from $4.83 and $4.955, plus two and a half cents worth of silver. Other private gold coins in the useful half eagle denomination followed: Moffat and Co., J.S. Ormsby, Pacific Company, Cincinnati Mining and Trading Company, and the Massachusetts and California Company all struck half eagles in 1849. Baldwin and Co. and Dubosq and Co. joined them in 1850. Shultz and Co. and Dunbar and Co. made their half eagles in 1851, and Wass, Molitor and Co, finally joined them in 1852. In addition to the privately made $5 gold pieces, these companies and others made other denominations, both larger and smaller, and the United States Assay Office of Gold produced officially authorized gold coins beginning in 1851.

The United States Mint in Philadelphia also moved quickly to turn the gold from California into new coins with the coining of new small gold dollar coins in May 1849 and the authorization of $20 double eagles in late 1849, with production that began in earnest in early 1850.

The challenges of getting gold from California to the mother mint in Philadelphia (perhaps best underscored by the loss of the S.S. Central America in 1857) and the westernmost branch mint in New Orleans demanded a better solution. Despite the Congressional delegation from California and the powerful Missouri senator Thomas Hart Benton preferring the establishment of a brand new mint at San Francisco, the United States Assay Office at San Francisco was legally authorized on September 30, 1850.

"The Secretary of the Treasury be and he is hereby authorized and directed to contract, upon the most reasonable terms, with the proprietors of some well established assaying works now in successful operation in California, upon satisfactory security, to be judged by the Secretary of the Treasury, who shall, under the supervision of the United States assayer, to be appointed by the President, by and with the advice and consent of the Senate, perform such duties in assaying and fixing the value of gold in grain and lumps, and forming the same into bars, as shall be prescribed by the Secretary of the Treasury, and that the said United States assayer shall cause the stamp of the United States, indicating the degree of fineness and value, to be affixed to each bar or ingot of gold that may be issued from the establishment. Provided that the United States shall not be held responsible for the loss of any gold deposited with said proprietors for assay."

Moffat and Company was given the Federal contract to open the assay office and Augustus Humbert was named its assayer. From January 1851 until December 1853, the United States Assay Office of Gold assayed and struck millions of dollars' worth of locally mined gold into coin form.

In July 1852, Federal legislation authorized the transition of the United States Assay Office of Gold into a full-fledged United States branch mint. On April 3, 1854, the building was re-opened as a United States Mint, and deposits were immediately accepted to be struck into official United States coins

San Francisco Branch Mint Coiner James B. Harmstead recalled in his memoir, published as Sentiments and Aspirations of a 19th Century Tradesman, the week this coin was struck and the circumstances relating to its tiny mintage.

At the end of March '54, Superintendent Birdsall announced in the local papers that the new mint would open on April 3rd for the reception of bullion for coinage and bars. That day, Adams and Company brought in the first deposit of gold, which weighed in at around 45 ounces. Actual coining of their bullion deposit didn't commence until about two weeks after the mint opened, and then only on a limited basis …

We had a special ceremony in the pressroom on the 18th of that month to consecrate the first day of coining. In attendance were a few government officials and city notables to join in the activities. … That day, we produced the first 178 twenty dollar gold pieces, one of which was sent to the Mint Director in Philadelphia, James Ross Snowden. For some unknown reason [for assay purposes], we sent him five more, one on the 21st, the 26th, the 29th, and lastly, two more on the 4th of May.

The first day deposits were reported in the Nevada Journal of Nevada City, California of April 7, 1854 as 4,050 total ounces. The first deposit from Adams and Co. weighed 50 ounces, another from Dr. A.S. Wright weighed 1,000 ounces, and "numerous smaller amounts, 3,000 oz."

On April 21, 1854, the same Nevada Journal noted "the San Francisco Branch Mint commenced the issue of eagles and half eagles on Tuesday last. We have seen none of those." This article slightly misstated the facts, as April 19 was the Wednesday following the Tuesday opening of the facility.

Researchers Nancy Oliver and Richard Kelly report that some or most of the Adams and Company deposit was in half eagles, citing a reference to the April 29, 1854, issue of Placerville's Mountain Democrat describing Adams and Company agent Edward Tracy displaying "some examples" of the newly-minted San Francisco half eagles. While it is possible that $1,310 worth of the Adams and Co. deposit of $1,311.92 worth of gold was in half eagles, there is no direct evidence to determine to whom or in what quantity the $1,340 in half eagles was paid out, excepting one that was sent to James Ross Snowden for assay purposes, leaving a total of 267 coins ($1,335) to be distributed.

Of those 267 coins, only three appear to exist today. The piece offered here has the most august provenance of all, acquired by F.C.C. Boyd, sold in the 1946 "World's Greatest Collection" sale of the Boyd gold coins for $5,250 to Louis Eliasberg, and then sold for $187,000 to the Pogue Family at the 1982 Eliasberg sale. The example impounded in the Smithsonian Institution was donated by Josiah K. Lilly's estate in lieu of taxes after Lilly's death in 1966. That coin first belonged to Waldo Newcomer, who paid $400 before his death in 1933 (ca. 1919, according to Breen in the mid-1960s), then was sold with Newcomer's other half eagles to Col. E.H.R. Green. Green's half eagles were sold to Clifford T. Weihman by Stack's, who then handled the sale of the entire group to Josiah K. Lilly. The Green-Lilly piece is illustrated in the famous "plate book" of the Green half eagle collection. A third piece, with no pedigree and graded EF-45 by NGC, was sold by Heritage in August 2018. A fourth example, the Wolfson coin, discovered by B. Max Mehl in the 1930s, sold to a little-known Chicago area collection, sold to Wolfson about 1955, acquired by Willis H. duPont at the 1962 Samuel W. Wolfson sale for $16,500, then stolen in a Miami home invasion in 1967 and said to be lost.

Of those, this is unquestionably the finest example of America's rarest branch mint half eagle and rarest Liberty Head gold coin. This coin widely surpasses the quality of the recently offered NGC EF-45 coin that brought $2.16 million in August 2018. That coin is now certified by PCGS and is the only other example traced in private hands. Despite past publications, no 1854-S half eagle was ever in the King Farouk Collection or the Norweb Collection. There is no evidence Col. Green ever owned more than one. Only one other is in any modern private cabinet in the United States or abroad. Satiny and beautiful, with quality that would attract numismatists even if this coin was common, there is no other 1854-S half eagle in this class; not in the past, nor the present, and we would bet the house against the future as well.

The Pogue Collection is known for coins of great stature, legendary rarity, and unparalleled quality. The finest known 1854-S half eagle ranks with the 1822 $5 in terms of absolute rarity and the difficulty with which a specimen is acquired. The present offering is the fifth all-time auction offering of an 1854-S half eagle since it was coined 166 years ago and the first for this exceptional example in 38 years. 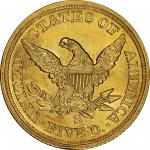