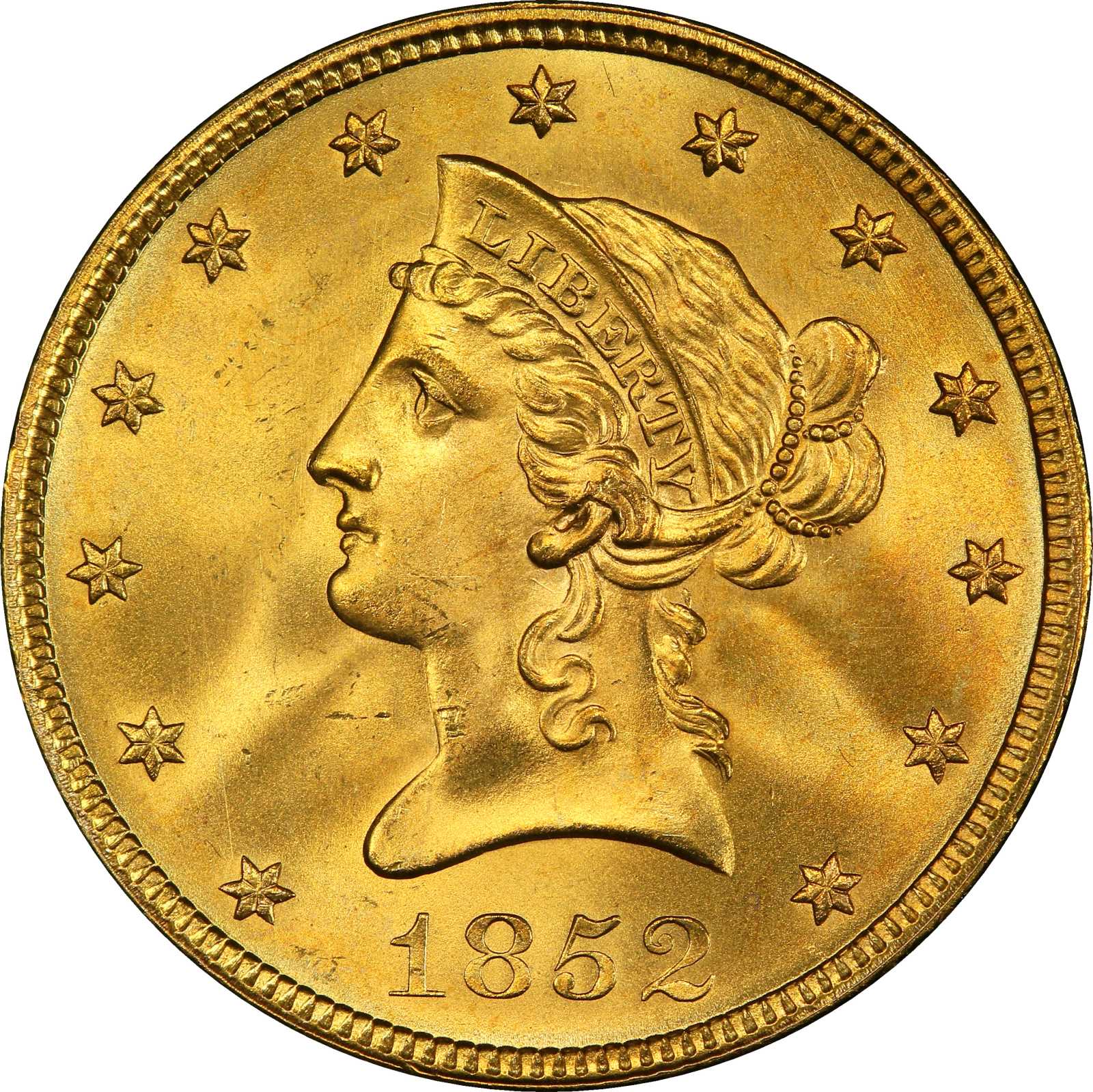 1852 Liberty Head Eagle. MS-66+ (PCGS). CAC. Phenomenal surfaces are enhanced by blended frosty luster and golden-rose patina. This is a sharply struck, overall pristine Gem that is universally regarded as the finest 1852 available to todays gold enthusiasts. Exquisite.In 1852, the Philadelphia Mint received enough gold from the California gold fields to coin 263,106 eagles. The coins entered commerce where they saw use until the Civil War disrupted monetary circulation nationwide. With the price of gold dropping in relation to silver because of the huge quantities of the yellow metal coming out California, silver was driven out of circulation by speculators seeking to make a small profit. In so doing, many gold coins took up the slack and saw heavy use. Larger denomination gold coins were also preferred for international trade particularly in Europe, and large quantities of eagles and double eagles made their way across the Atlantic. The outward flow was exacerbated in the 1860s when foreign merchants would only take gold and silver in trade. These coins would spend the next several decades overseas, mostly in sacks, moving from one bank to another, and quite often suffering abrasions and scrapes along the way. Many more were lost to the Treasury meltings of the 1930s, leaving only a comparative few for numismatists to contemplate.If looking at mintage figures alone, the 1852 eagle in theory <em>should</em> be a relatively available coin, even in Mint State. Indeed, in VF and EF grades, the issue can be found with some degree of ease, though not in large numbers. Even at the very lowest AU level, this is not an especially scarce coin, though only a few dozen are known at the Choice AU level. In Uncirculated the date becomes one of the most demanding Type II eagles to locate. To date, the <em>PCGS Population Report</em> for the 1852 eagle shows a total of 532 events in all grades, of those only 26 were Mint State, and with the lions share of those receiving an MS-61 grade. Above that is a tiny cluster of specimens in MS-62 at both services, then nothing until you reach the very lonely top with this solitary marvel of a coin. This coins significance is reinforced by its place at the very top of the Condition Census for the <em>entire type</em>. The Type II No Motto eagle was produced for 27 years between 1839 and 1866 and of the more than 12,000 grading events recorded at PCGS for the type, only five coins have received a Gem Mint State grade, with this being the finest of that truly rarefied group. That two of the three finest known Type II No Motto eagles reside in the same cabinet is a tribute to D. Brent Pogues reputation as a connoisseur. This is a singular opportunity for the collectors who seek only the best. From the D. Brent Pogue Collection. Earlier, from our (Bowers and Merenas) Harry Einstein Collection sale, June 1986, lot 452; Heritages sale of the Gold Rush Collection, January 2005 FUN Signature Sale, lot 30057; Heritages sale of the Madison Collection, January 2008 FUN Signature Auction, lot 3261.