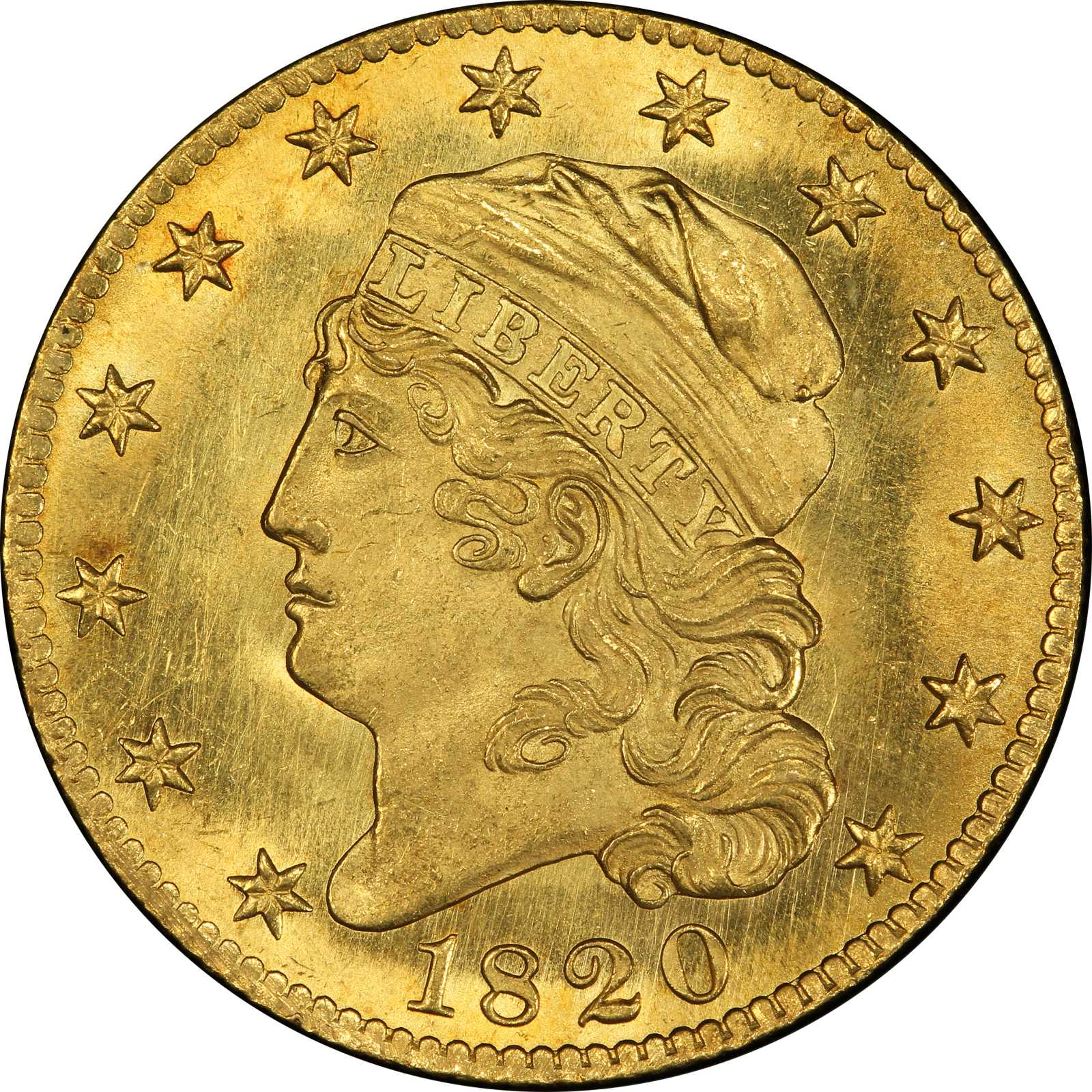 1820 Capped Head Left Half Eagle. Bass Dannreuther-7. Rarity-7. Curl Base 2, Large Letters. MS-65+ (PCGS). CAC. An intense combination of satiny luster and fully prooflike fields magnifies light as it reflects it. Even medium yellow gold color yields to deeper yellow amidst the frosty arcs at the rims, an ideal and beautiful pairing. There are only a very few of the most minor contacts, none significant and very few even visible to the naked eye. A little mark below the wing at left, far beneath T of UNITED, is perhaps the most serious. A light vertical hairline hugs the outline of Libertys lower curls. Other lines are trivial and should not be confused with the parallel die finish lines seen in the fields. The visual appeal is spectacular, and this coin is capable of amazing even the most cynical of numismatists. Specks of transparent lacquer or glue are noted beneath the lower left serif of D in the denomination, above the crown of the eagles head, and outside the left upright of the first A in AMERICA. On the obverse, they appear outside the lower left point of star 5 and on either side of star 9. Seemingly identical specks appear on the Gem Mickley-Appleton-Garrett-Pogue 1819 half eagle. While this piece is not from the Garrett Collection, it could have been among the Mickley coins later acquired by William Sumner Appleton; the presence of identical detritus may suggest an identical provenance. The portrait of Liberty shows some roughened texture, as struck, a by-product of oxidation within the deepest relief of the dies, beyond the reach of fine polishing or repair. The letters of LIBERTY are about half polished out, reflective at the tops of LIBERT, somewhat frosty and textured at the bases of those letters. The presence of a tiny eruption of die spalling off of Libertys forecurl places this in order as Bass-Dannreuther state b/c. The reverse state is identical to its previous use. We count six distinct specimens of this die marriage. Aside from the Norweb-Bass Proof, each has been described as Gem in previous appearances, a highly unusual grade distribution. 1. Harry Bass Core Collection. Graded Proof-63 in the 1987 Norweb sale. Earlier from the 1912 George H. Earle, Jr. and 1956 Thomas G. Melish sales. Impounded in the American Numismatic Association Museum. Described by John Dannreuther as "the earliest half eagle known in Proof!" 3. The Bass duplicate, sold in Bass II as lot 814, graded MS-65 (PCGS). Reoffered in the Superior Galleries sale of February 2001 as lot 4580 and the American Numismatic Rarities of August 2004 as lot 1009. 3. The John A. Beck specimen, sold as lot 403 in the January 1975 Beck I sale by Abner Kreisberg. 4. The James A. Stack specimen, offered in the October 1994 James A. Stack sale as lot 1068. 5. The present specimen, from the 1962 Samuel W. Wolfson sale. 6. The example offered in the following lot, from the 1986 Harry Einstein sale. Among circulation strikes of this variety, three of the above listed specimens are frosty; the other two (this coin and the James A. Stack coin) are deeply prooflike. The early 1820s represented the beginning of the end for Old Tenor United States gold coinage. From this era until after August 1, 1834, when the lower weight New Tenor gold coins were introduced, the value of gold in a half eagle was worth more than five dollars, meaning half eagles werent spent; they were struck, exported, and melted, with the U.S. Mints depositors taking full advantage of free weighing and assaying, courtesy of the United States government. Most surviving half eagles from the 1820s are technically Mint State, aside from those used in jewelry or otherwise damaged. Despite the lack of circulation, very few specimens exist in Gem preservation. PCGS has assigned an 1820 half eagle a grade of MS-65 or finer on just eight occasions. Among Curl Base 2, Small Letters coins, only a single example has been graded finer. From the D. Brent Pogue Collection. Earlier, from the Samuel W. Wolfson Collection; our (Stacks) sale of the Samuel W. Wolfson Collection, Part I, October 1962, lot 363; Julian Leidman; Paramount (David Akers), by sale, August 1984, our sale of the D. Brent Pogue Collection, Part III, February 2016, lot 3157. Pogue Collection lot tag included. 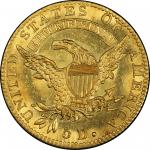