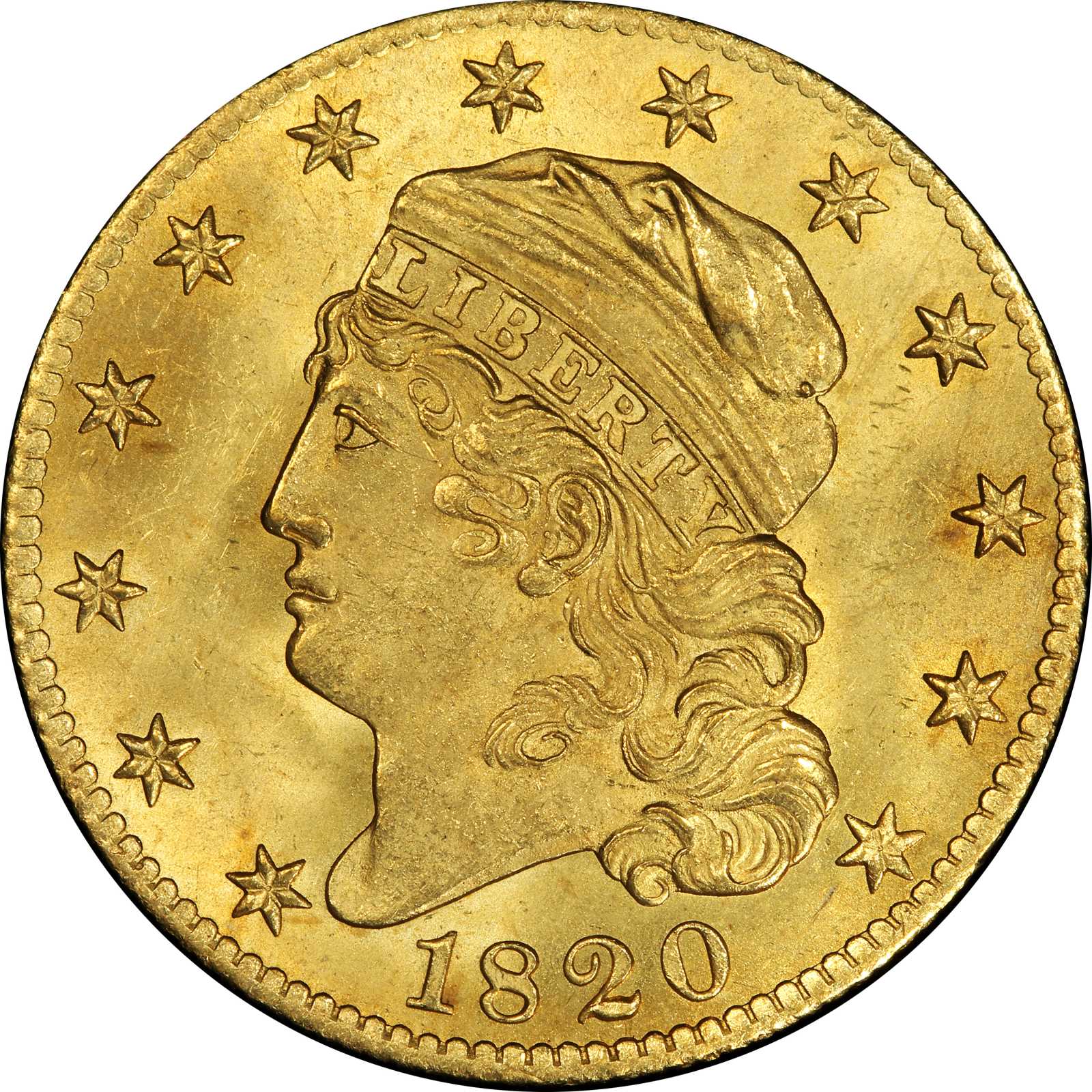 1820 Capped Head Left Half Eagle. Bass Dannreuther-7. Rarity-7. Curl Base 2, Large Letters. MS-65+ (PCGS). CAC. A fully frosty Gem specimen of this rare variety, the second D. Brent Pogue example is struck from a slightly earlier die state of the obverse than the previously offered coin. The medium yellow gold surfaces are aglow with satiny luster, highlighting deeper color around peripheral design elements. The strike is nice and crisp, showing just minor softness on the curl in front of Libertys ear. Some trivial scattered lines are seen, not serious individually or as a group. A couple tiny contact marks are noted below ME of AMERICA, and a couple of short scratches hide in non-focal areas, namely a horizontal scrape at the corner of Libertys eye and a vertical scratch above the left upright of the first U of UNUM. The appearance of this coin, with no prooflike reflectivity, is vastly different from the preceding lot. The die state is almost identical, except the spalling artifacts off of Libertys forecurl are almost imperceptibly smaller on this coin than on the previous. The dramatic difference in appearance yet nearly identical die states could provoke intense discussion among specialists. For collectors, these coins offer an unusual decision: would you rather have a prooflike Gem specimen of a Rarity-7 early half eagle, or a frosty Gem specimen of the same extremely rare variety? Decisions like this are fodder for parlor games most of the time, but in our offering of the D. Brent Pogue Collection, they make the transition from fantasy to reality. Nine die marriages of 1820 half eagles are known, of which three are Curl Base 2 obverse, Large Letters reverse combinations. All three of these are rare. BD-5 is perhaps the most commonly encountered, with a population estimated at 20 to 25 pieces. BD-7 appears to have a population of six coins, as listed above. BD-9 may be the rarest of the varieties, with a population estimated in the Bass-Dannreuther book at four to six coins. The total population of 1820 Curl Base 2, Large Letters half eagles appears to be in the range of 30 to 40 coins over the full gamut of grades, in both private and institutional collections. The Square Base 2 obverses, used on BD-1 through BD-4, are seen on somewhere between 75 and 100 surviving specimens, most of which are struck from the BD-3 combination. The two Curl Base 2, Small Letters varieties (BD-6, BD-8) are both extremely rare; the Bass-Dannreuther text estimates the combined population is just 10 to 16 coins. The D. Brent Pogue Collection included specimens of each of these major varieties of 1820 half eagle, four coins in all, each of them superb Gems. Few are the collectors who could acquire two Gem examples of a Rarity-7 early half eagle variety, representing one-third of the entire surviving population, rather than choosing between the prooflike Gem and the frosty Gem. The joy of collecting implicit in such a decision - why not both? - is the same whether the coins cost tens of dollars or many hundreds of thousands. While the D. Brent Pogue Collection is unlike any collection that has ever been assembled, the gentleman who built it is like most collectors, passionate about these objects, excited to find a new coin to acquire, always looking for a reason to include a new piece as long as it meets an exacting standard of quality. From the D. Brent Pogue Collection. Earlier, from our (Bowers and Merenas) sale of the Harry Einstein Collection, June 1986, lot 344; Heritages sale of April 2008, lot 2435, our sale of the D. Brent Pogue Collection, Part III, February 2016, lot 3158. Pogue Collection lot tag included. 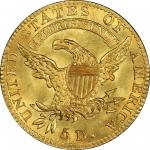