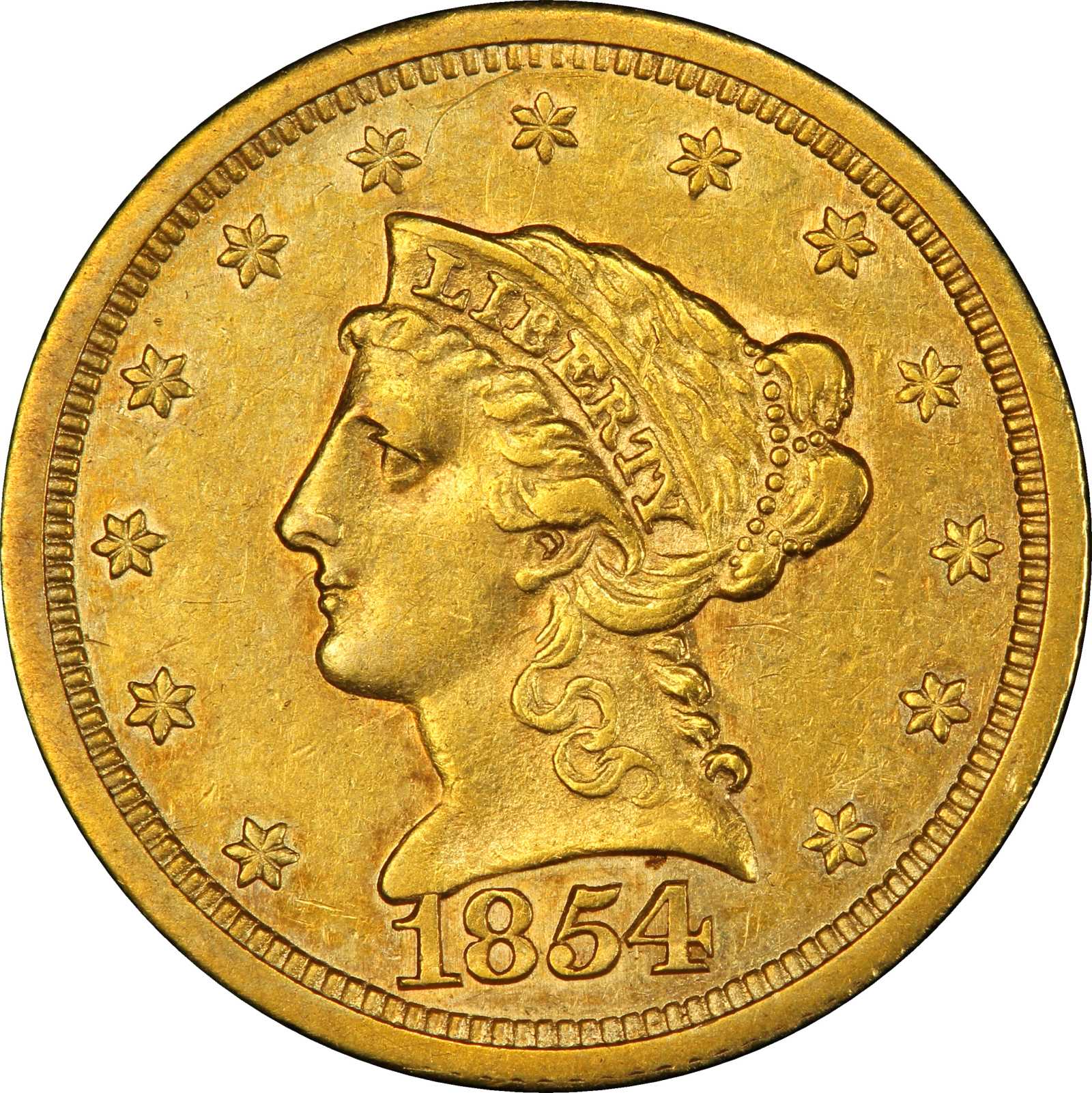 1854-S Liberty Head Quarter Eagle. AU-50 (PCGS). An unusually pretty specimen of this famous rarity, the Bass-Pogue 1854-S quarter eagle is deeply toned in shades of warm maize yellow, contrasting with clear blue near the obverse rims, and deeper copper-peach and violet around the central reverse and the lower obverse device. A good deal of luster persists, satiny on both sides, a bit reflective on the reverse. The lustrous surfaces and the deep colors create a warm and attractive overall appearance. Both sides are crisply struck and well defined, though the reverse appears to have been axially misaligned trivially, leaving the extreme lower right periphery a bit more worn than elsewhere. The surfaces show the usual array of hairlines for a gold coin in this grade range, no more and perhaps even a bit less. A tiny fleck of detritus is noted against the bust truncation above the 4. A thin arc scratch curves from the right of star 6 to the denticles above the left side of star 7, but other obverse marks are trivial. On the reverse, a scratch stretches from above the top arrowhead to below M of AMERICA. A thinner vertical hairline shoots the gap between the period that follows the D of the denomination and the stop that separates the denomination from the end of the reverse legend. A die clash surrounds the upper portion of the reverse eagle. No bad contact points were left behind by this coins short, easy stay in Old West circulation.There appear to be about a dozen known examples of this issue, all struck on April 19, 1854, the same day as the 1854-S half eagles. There were actually fewer 1854-S quarter eagles struck than half eagles - just 246 pieces, amounting to only $615 face value. We accounted for 13 provenance chains and at least 10 discrete specimens in our September 2005 cataloging of the then newly discovered C.L. Lee specimen, but conflated the provenance of the 1974 Rio Rancho coin sold by Superior that was later offered by Heritage in February 2007, a PCGS EF-45 that brought $345,000, bringing that total to 11. One is impounded in the National Numismatic Collection at the Smithsonian Institution. PCGS has certified seven, only two of which are better than VF and three of which grade Fine or below. This is the only AU (formerly graded AU-53 by NGC) and the unquestioned finest known. There is no more important, famous, or elusive quarter eagle than the 1854-S. Its stature as the first San Francisco Mint quarter eagle makes it a classic. Its tiny census of survivors and seemingly infinitesimal original mintage, make it a rarity with few parallels in the entire American series in any metal. And its relationship to the famous 1854-S half eagles, coined that same day, seals this issues status as one of the most historic and desirable American coins of any denomination. Struck without acclaim or numismatic interest, the entire mintage slipped into circulation to serve a dire need for circulating small change around the gold fields of California, anything more easily handled than pinches of gold dust and more convenient than foreign silver. Subsequent runs of San Francisco quarter eagles showed the demand, dwarfing the mintages of other branch mints and occasionally even the mother mint in Philadelphia. The next two emissions produced 71,160 in 1856 and 69,200 in 1857. Those circulated alongside of this coin, across saloon counters and into dusty mining camps, the fulcrum of the small transactions that built California into an international economic power.In 1946, Abe Kosoff offered this coin as lot 242 of his "Worlds Greatest Collection" auction of the F.C.C. Boyd Collection, noting that the 1854-S quarter eagle "is seldom offered in any condition and is never in better condition." Think of all the extraordinary rarities brought to market since 1946, all of the dramatic new discoveries, and despite that, Kosoffs description of this coin remains accurate: the 1854-S quarter eagle is never in better condition than this finest known specimen. Great excitement prevailed when a choice EF was discovered in 2005, fresh from a Northern California family that had held it since its time in circulation, but this pieces title as the best of the rarest has never been threatened. From the D. Brent Pogue Collection. Earlier, from the F.C.C. Boyd Collection; Numismatic Gallerys (Abe Kosoff and Abner Kreisberg) sale of the Worlds Great Collection, January 1946, lot 242; Jacob Shapiro a.k.a. "J.F. Bell" Collection; Numismatic Gallerys (Abe Kosoff and Abner Kreisberg) sale of the "Memorable Collection" (i.e., Jacob Shapiro, a.k.a. J.F. "Bell"), March 1948, lot 222; New Netherlands Coin Companys 51st sale, June 1958, lot 837; Harry W. Bass, Jr. Collection, acquired 1974; our (Bowers and Merenas) sale of the Harry W. Bass, Jr. Collection, Part II, October 1999, lot 472; Superior Galleries Elite Sale, January 2004, lot 792.