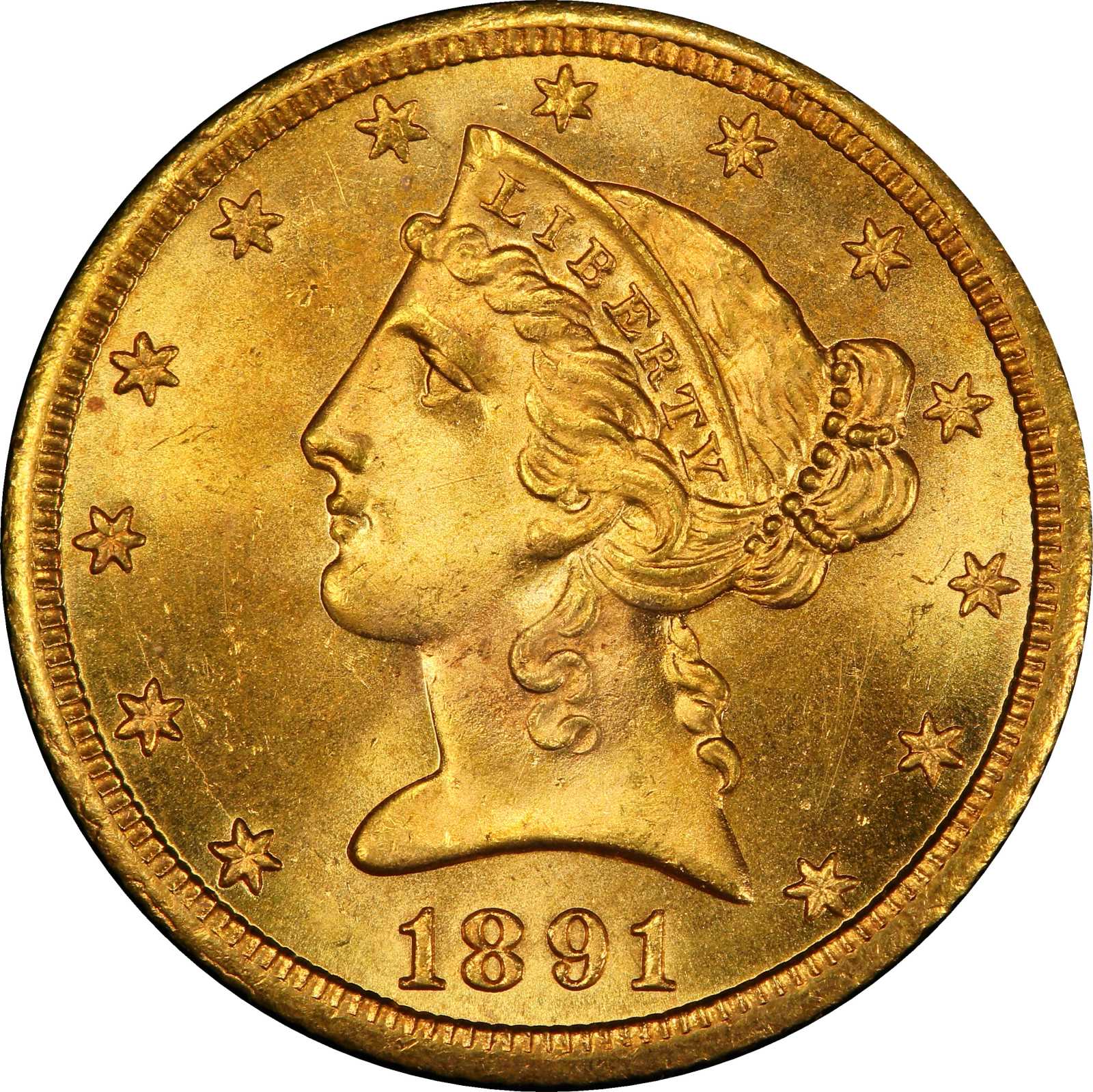 1891-CC Liberty Head Half Eagle. MS-65 (PCGS). CAC. The gorgeous Gem surfaces feature a blend of rose-orange patina and frosty mint luster. The strike is sharp for the issue, and both sides are exceptionally well preserved for a Carson City Mint gold coin of any date or denomination. Extraordinary!Due to financial setbacks, the demand for gold specie from European countries increased markedly in 1891. In his cataloging for our August 2012 sale of the Battle Born Collection of Carson City Mint Coinage, Rusty Goe relates that during the six month period from February to July, 1891, the United States exported more than $70 million in gold to Europe. Most of it -- nearly $66.5 million -- was in coin form, rapidly draining the nations reserves. Certain influential Americans, including Treasury Secretary Charles Foster, no longer considered gold bars an alternative to coins for this purpose. Foster succeeded William Windom as secretary of the Treasury early in 1891, one of his earliest measures being to increase the premium attached to the purchase of gold bars. This eventually made the acquisition of United States gold in coin form more attractive to European buyers.Rusty Goe also describes a second measure by Treasury Secretary Foster soon after he took office:<em>"Fosters second measure occurred when he agreed to redeem the Treasury Notes and greenbacks held by wealthy U.S. bankers in the East in gold. Some historians have said that these savvy financiers conspired with their counterparts in Europe to deplete the U.S. Treasurys gold reserves."</em>Whether the collusion was real or not, this new source of domestic demand joined that from frenzied European buyers to increase the quantity of gold coins leaving the federal governments vaults.The Carson City Mint stepped up gold coin production in 1891 to help meet this heightened demand and alleviate some of the strain on the nations reserves. The facilitys output of half eagles reached its peak in 1891, in fact, and for the second year in a row coinage of this denomination at the Carson City Mint outstripped that at the Philadelphia Mint. The mintage for the 1891-CC amounted to 208,000 coins, with Rusty Goe reporting, "The coining department turned out 122,000 half eagles in the first half of 1891, and between July and December it delivered another 86,000." Many of these coins were exported, as intended, and repatriations from European vaults in recent decades have provided a windfall of Mint State examples for todays mintmarked type collectors and Carson City Mint enthusiasts. There are even quite a few Choice Uncirculated coins in MS-63 and MS-64 extant, but in Gem Mint State the 1891-CC remains a formidable condition rarity. Tied for finest certified at PCGS, the Pogue specimen is truly remarkable and is eagerly awaiting inclusion in another world class numismatic cabinet. From the D. Brent Pogue Collection. Earlier, from our (American Numismatic Rarities) sale of the Old West Collection, August 2006, lot 1338.