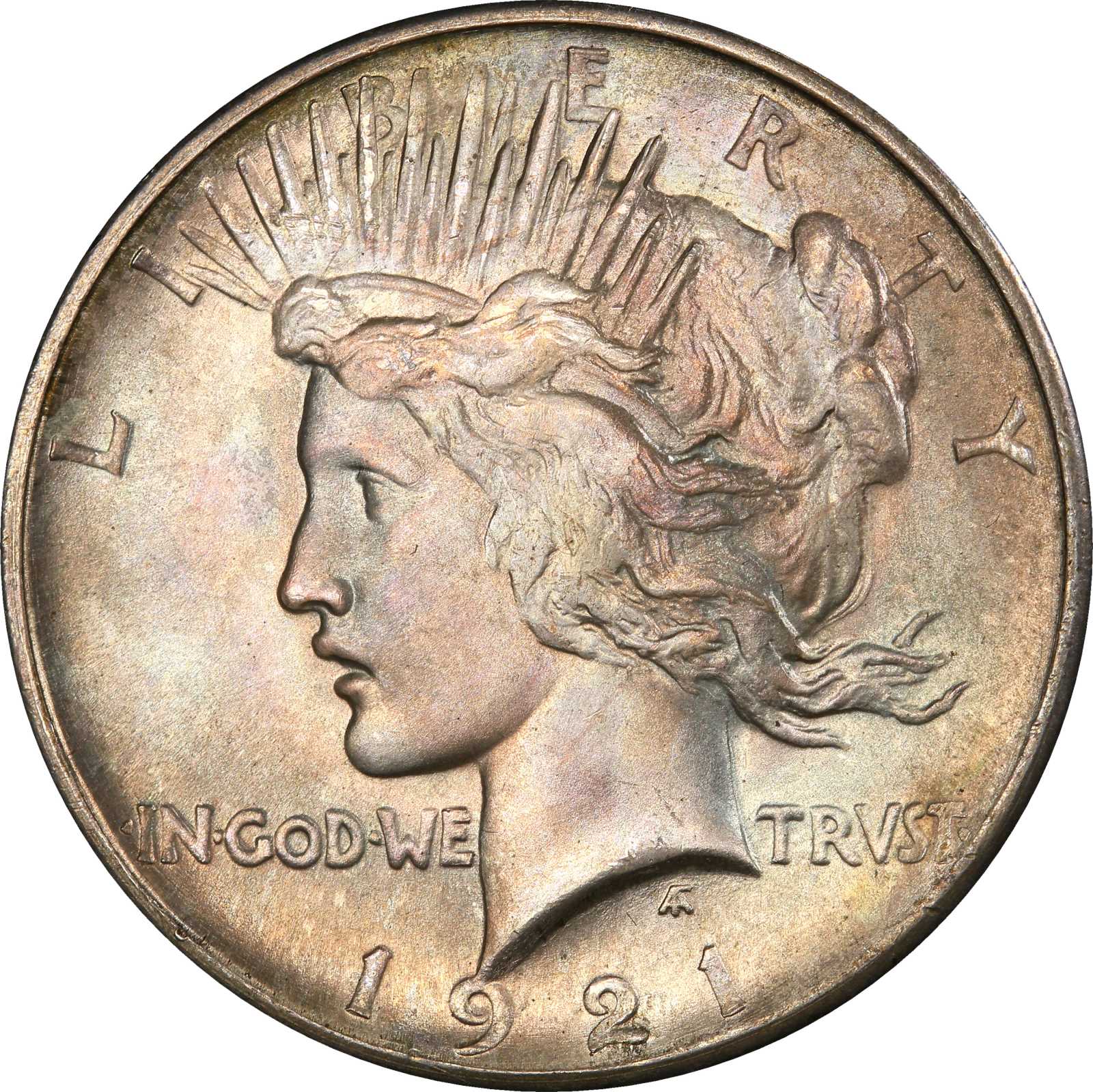 1921 Peace Silver Dollar. High Relief. MS-66+ (PCGS). CAC. Extremely beautiful iridescent toning in pastel pink, gold, apricot, powder blue and olive graces the surfaces of this extraordinary High Relief Peace dollar. Both sides are frosty, exceptionally smooth and very close to Superb Gem quality. The strike is far superior to what is typically seen in survivors of this challenging issue. With the conclusion of World War I and the signing of the Versailles Treaty in 1919, there was widespread hope that this would usher in a new era of peace and prosperity worthy of commemoration on coinage. The passage of the Pittman Act in 1918 required the Treasury to melt as many as 350 million silver dollars to be used as bullion for the production of subsidiary silver coinage or to be sold as bullion. It also required that the Mint strike replacement silver dollars for any coins of that denomination that were destroyed. In just two years, more than 270 million silver dollars ended up in the Mints crucibles as a result of the Pittman Act. To meet the terms of the act, low relief 1921 Morgan dollars were produced in prodigious quantities.With the encouragement of the ANA, legislation was proposed and approved by Congress in May 1921 to issue a new silver dollar to celebrate the return of peace. The Commission of Fine Arts sponsored a competition among invited artists to design the new coin. The design by Italian immigrant Anthony de Francisci was selected the winner. The winning design featured a bust of Liberty modeled on his wife, Teresa, and a proud eagle standing on a rock engraved with the word PEACE surrounded by a glory of rays on the reverse. The new design was not ready until late in the year and the entire production of 1,006,473 coins took place between December 26 and 31. The first of these coins were released just a few days later on January 3. The 1921 was produced in high relief, which was found to cause excessive wear on the dies, so the relief was reduced beginning in 1922, creating a highly desirable one-year design type. The 1921 High Relief Peace dollar is highly sought after by numismatists, especially at the very highest levels of preservation. Well preserved and with significant eye appeal, this is certainly one of the nicest to come on the market in recent times. From the D. Brent Pogue Collection.