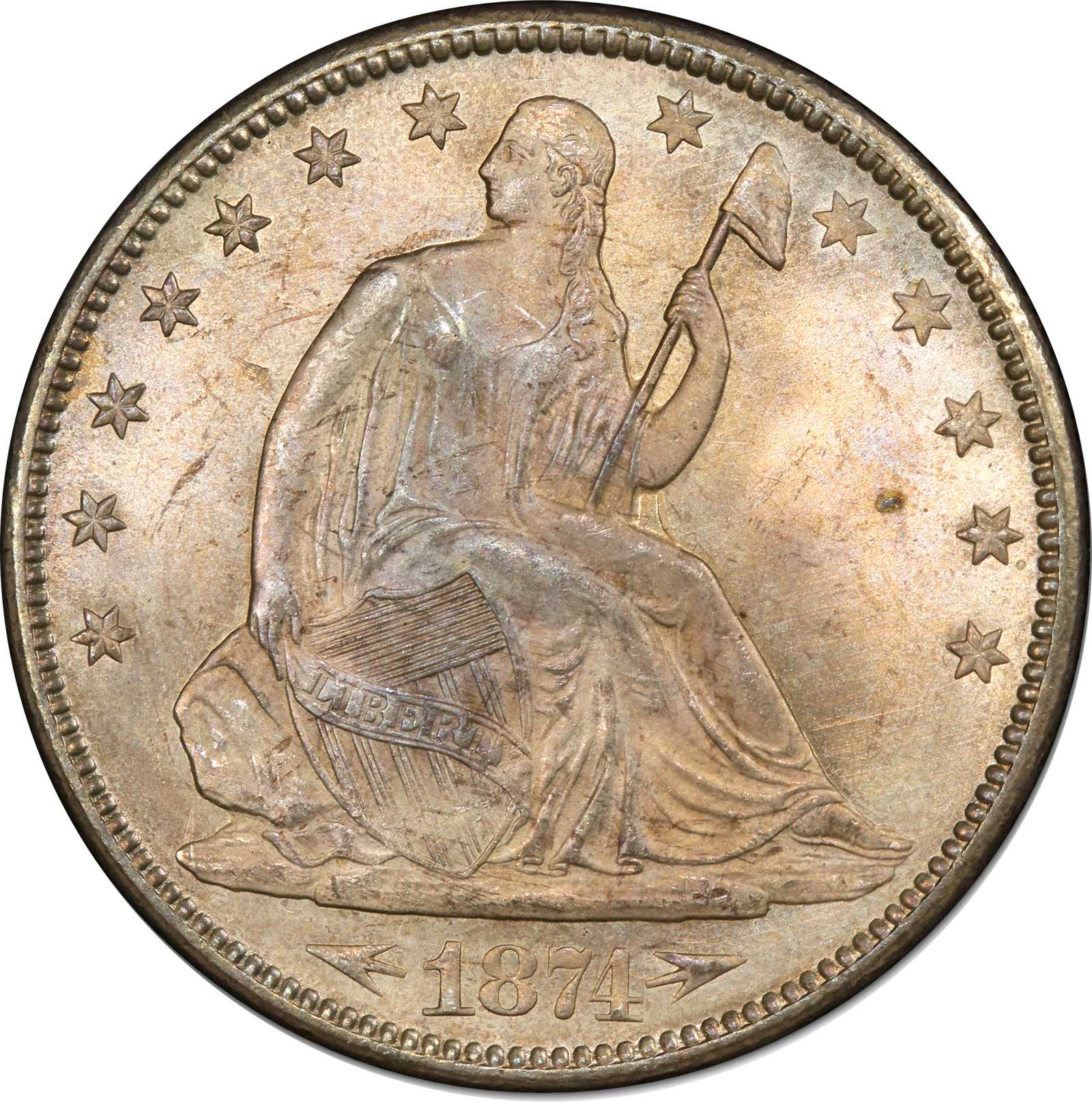 1874-CC Liberty Seated Half Dollar. Arrows. WB-3. Rarity-4. MS-66 (PCGS). This is a simply outstanding example of the key date 1874-CC half dollar, a coin that offers both unrivaled condition rarity and a mystery surrounding its provenance. The surfaces are lovely, both sides dusted with iridescent antique silver, champagne-pink and powder blue over full, softly frosted luster. A touch of softness to the top of Libertys head and stars 7 to 12 is common for the issue and hardly worthy of mention, especially since the balance of the design elements are sharply to fully rendered. Exceptionally smooth and virtually pristine. Here is a phenomenal condition rarity with superior technical quality and strong eye appeal that will do justice to the finest collection of Liberty Seated or Carson City Mint coinage.The 1874-CC is one of only two Carson City Mint issues in the Arrows, Motto half dollar type of 1873 to 1874. It is rarer than the 1873-CC Arrows in all grades and, with a mintage of 59,000 pieces, it is one of the key issues among Liberty Seated half dollars. According to Bill Bugert in the 2010 reference <em>A Register of Liberty Seated Half Dollar Varieties, Volume II: Carson City Branch Mint</em>, only 300 to 350 examples of the 1874-CC are extant in all grades. In his forthcoming book <em>The Confident Carson City Coin Collector</em>, Carson City Mint expert Rusty Goe takes a more conservative view with an estimate of just 165 to 220 coins known. Most survivors are of the WB-3 variety, as here, and the vast majority are in low grades with heavily worn or impaired surfaces. Locating a Mint State example is extremely challenging, with Rusty Goe estimating that only 16 to 19 Uncirculated coins are extant. These high grade coins survived almost purely as a matter of chance since there was no known numismatic interest in Carson City Mint coinage during the 1870s.This extraordinary Gem is the finest certified for the 1874-CC, although its earliest provenance has apparently been lost. Its first confirmed auction appearance was as lot 792 in RARCOAs session of Auction 90, certified MS-64 by PCGS at the time. Writing about this coin in his forthcoming book, Rusty Goe states:<em>"The specimen in that 1990 RARCOA sale, as observed by the cataloger, stood at the top of the condition census, thanks to the MS-64 grade PCGSs experts had assigned it. In its very-early-generation PCGS MS-64 slab it realized $26,400. And then it disappeared. Sometime around 2003 an MS-66 submission event suddenly appeared in PCGSs database. It represented this coin from that 1990 RARCOA auction. That was of course a huge leap in condition rating, from MS-64 to MS-66. And it once again moved this piece to the number one position on the condition census."</em>The <em>PCGS CoinFacts</em> website confirms the 2003 grading event referred to by Rusty Goe: "The PCGS MS66 example remains a mystery as it has not appeared on the market since it was first graded in 2003." Rusty Goe further states, "Sometime around October 2012 the owner of this coin put it up for sale through a dealer-broker reportedly at a price in excess of $100,000." The eventual buyer was D. Brent Pogue, and the coin is now making its first auction appearance as a PCGS-certified MS-66. We anticipate a new record price for the issue when this highly significant 1874-CC half dollar crosses the auction block.The Carson City Mint employed three obverse dies and a single reverse die in three marriages to strike all known 1874-CC half dollars. As stated, most survivors are from the WB-3 die pairing, the reverse in a later state than in the WB-1 and WB-2 marriages, with a small raised die defect at the back of the eagles head below the letter T in TRUST. Bill Bugert refers to this curious feature as a "cowlick." An even later state of this reverse die is known, attributed as WB-3a and referred to as the "Railroad Track Reverse" due to prominent die damage from the rim through the letters TE in STATES.Stacks Bowers Galleries thanks Rusty Goe and Bill Bugert for providing historical and other numismatic information on the 1874-CC half dollar issue, as well as provenance information on the Pogue specimen. From RARCOAs session of Auction 90, August 1990, lot 729.