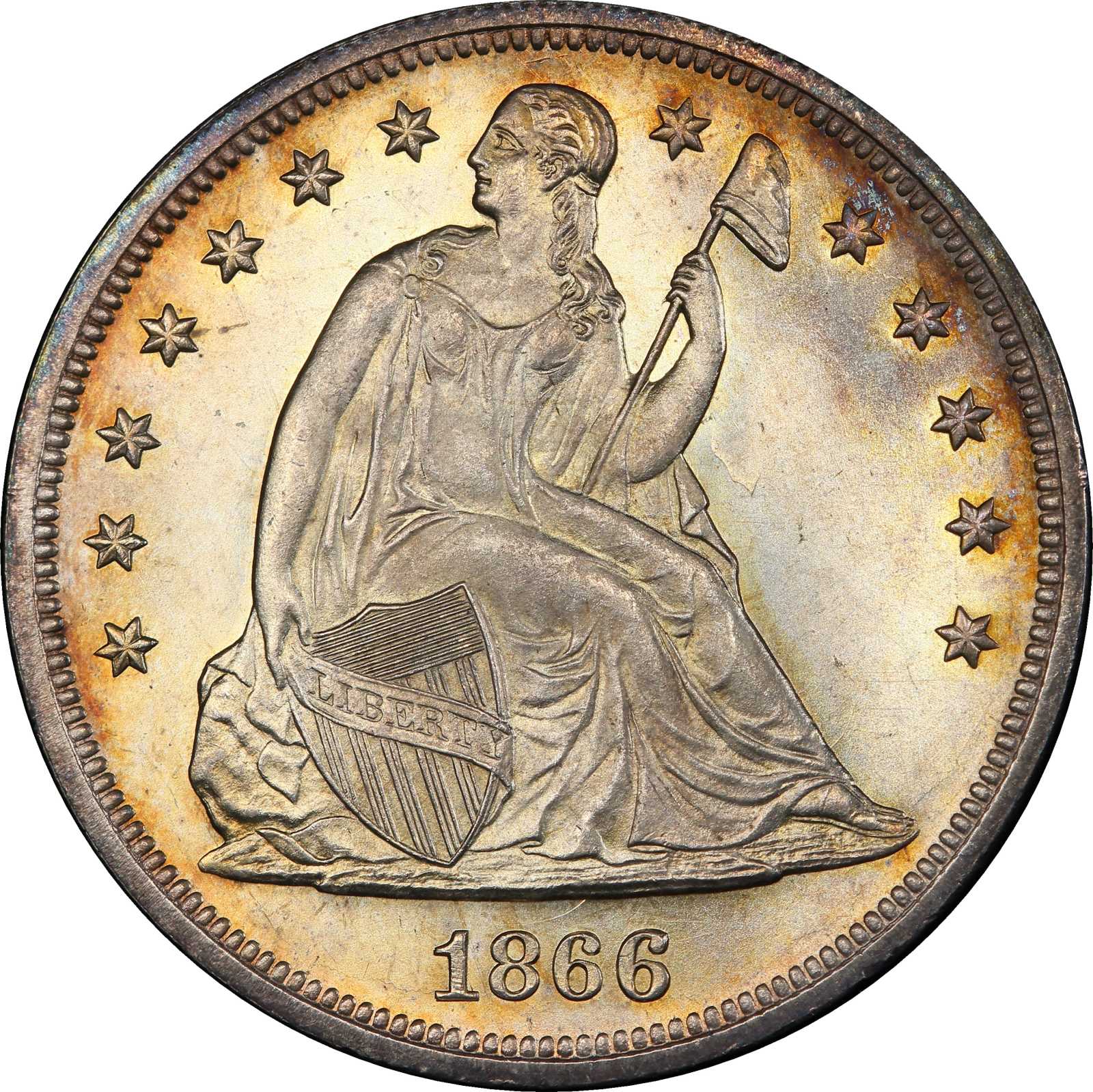 1866 Liberty Seated Silver Dollar. OC-1. Rarity-2. Repunched Date, Doubled Die Reverse. MS-66+ (PCGS). CAC. Gorgeous reddish-gold peripheral toning is more expansive on the reverse, where it blends with blushes of powder blue iridescence. Lustrous and frosty throughout, this sharply struck and visually appealing Gem is sure to please.During the Reconstruction period, silver dollars continued their use as a trade coin rather than in domestic commerce. The statutory weight of the silver coinage remained at its original 1840 standard and was higher than the equivalent minor coinage. Some Liberty Seated dollars did see use at home though this was largely in the Western states, in particular the later issues from Carson City.One of the lasting effects of the Civil War was the 1864 adoption of the motto "In God We Trust" on the nations coinage. In 1861 when the nations morale was at a low point, Reverend M.R. Watkinson of Ridleyville, Pennsylvania petitioned Secretary of the Treasury Salmon P. Chase urging the placement of a motto acknowledging "Almighty God in some form in our coins." Chase received this petition positively and instructed the director of the Mint to create designs and prepare patterns with various versions of the motto that he could take to Congress. On April 22, 1864, Congress passed a law that specified the addition of IN GOD WE TRUST on the newly created two-cent coin. On March 3, 1865, the Congress passed further legislation to authorize the placement of the motto In God We Trust on major silver coins and all gold coins. The motto first appeared on the silver dollar in 1866 and remained for every subsequent issue. Only two Proof 1866 dollars were produced without the motto sometime in the 1870s or even 1880s. The Philadelphia Mint was the only facility to produce silver dollars in 1866, striking a total of 48,900 pieces accomplished in five deliveries: 6,700 on January 30; 15,900 on May 8; 6,600 on June 21; 13,900 on July 30; and 5,800 on August 24. A San Francisco mintage was contemplated with the Mint going so far as to provide the branch mint two obverse and six reverse dies, but these were never used. As with earlier issues, the bulk of these coins comprised bullion deposits ordered for use in international commerce, many of which were ultimately melted down, especially those that ended up in China. The few survivors likely represent coins that remained in government hands until a decline in bullion prices during the early to mid 1870s allowed their release. At that point they were eagerly acquired by numismatists. Today, perhaps a couple hundred remain in all grades. Of these, maybe between 50 and 100 are Mint State, mostly between MS-62 and MS-64. As with other contemporary dollar issues, the 1866 is prohibitively rare above Gem and seldom appears at public sale. As is befitting the Pogue Collection, the present coin is among the best of the best and is worthy of inclusion in the finest cabinet. From the D. Brent Pogue Collection.