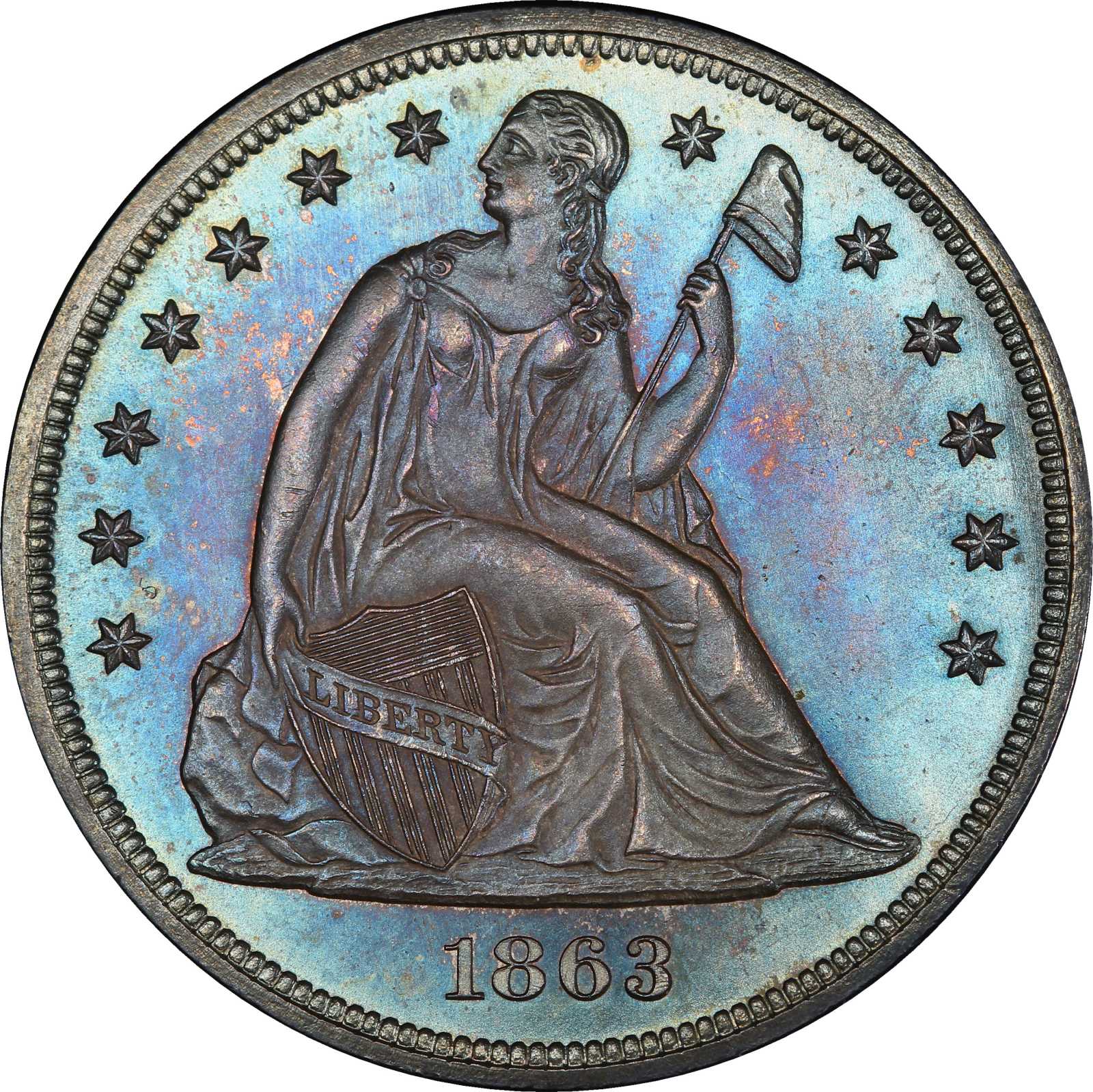 1863 Liberty Seated Silver Dollar. OC-1. Rarity-3-. MS-67 (PCGS). This richly and originally toned Superb Gem is truly lovely, with warm steel and pewter gray patina and exceptional undertones of vivid cobalt blue and lilac-purple. Fully struck, highly lustrous, and virtually pristine.Since its introduction in 1840, the Liberty Seated silver dollar saw more use in international trade than for domestic commerce. Overseas, particularly in European and Chinese markets, gold and silver was preferred over paper currency, which could very easily be devalued or even rendered worthless. As early as the 1840s, silver dollars traded at a 3% to 6% premium domestically over bank notes limiting their use in normal day to day circulation. The silver dollar therefore became an early trade dollar, a position that was further solidified when the enormous quantities of gold discovered in California drove up the price of silver, causing wide-scale domestic hoarding of silver coins. While the Act of February 21, 1853 reduced the weight of the half dime, dime, quarter, and half dollar, the silver dollars standards remained unchanged, essentially ensuring its use for international commerce. The comparatively small quantities of silver dollars struck in the 1850s and 1860s were primarily ordered by importers and exporters who used the large silver coins for purchasing goods overseas.With the outbreak of the Civil War, confidence in paper currency was even less than it was before. Because specie payments were in suspension, the small quantities of silver dollars struck during the conflict were almost exclusively the province of bullion depositors seeking coinage for use overseas. Since the silver dollar seldom saw domestic use, only a small number were taken up by the nascent numismatic community; the few active coin collectors of the era preferred to order Proofs instead. Such is the case for the 27,200 circulation strike silver dollars coined at the Philadelphia Mint in 1863. The coins were produced in four distinct batches from an unknown number of dies: 3,800 pieces on March 9; 1,400 on March 26; 15,400 on April 10, and finally 6,600 coins on November 22.Estimates vary widely as to the number of extant 1863 silver dollars in any grade. At the high end, PCGS CoinFacts provides an estimate of 1,100 specimens. Bowers postulates somewhere around 275 to 400 remain, while Dick Osburn and Brian Cushing account for only 450 coins in their recent study, <em>Liberty Seated Dollars: A Register of Die Varieties</em>. Because of the preference for Proof coins in the early years of American numismatics, Proof specimens are seen more frequently at auction than Mint State pieces, which tend to cluster around the Choice level. While some Liberty Seated dollars appeared in the Treasury holdings released in the 1960s, none were dated 1863 and it is highly unlikely any hoard will turn up. Gem examples are of the highest rarity and most often change hands via private treaty rather than across the auction block. This is the finest available in a PCGS holder and will attract considerable interest and spirited bidding. From the D. Brent Pogue Collection. 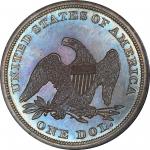