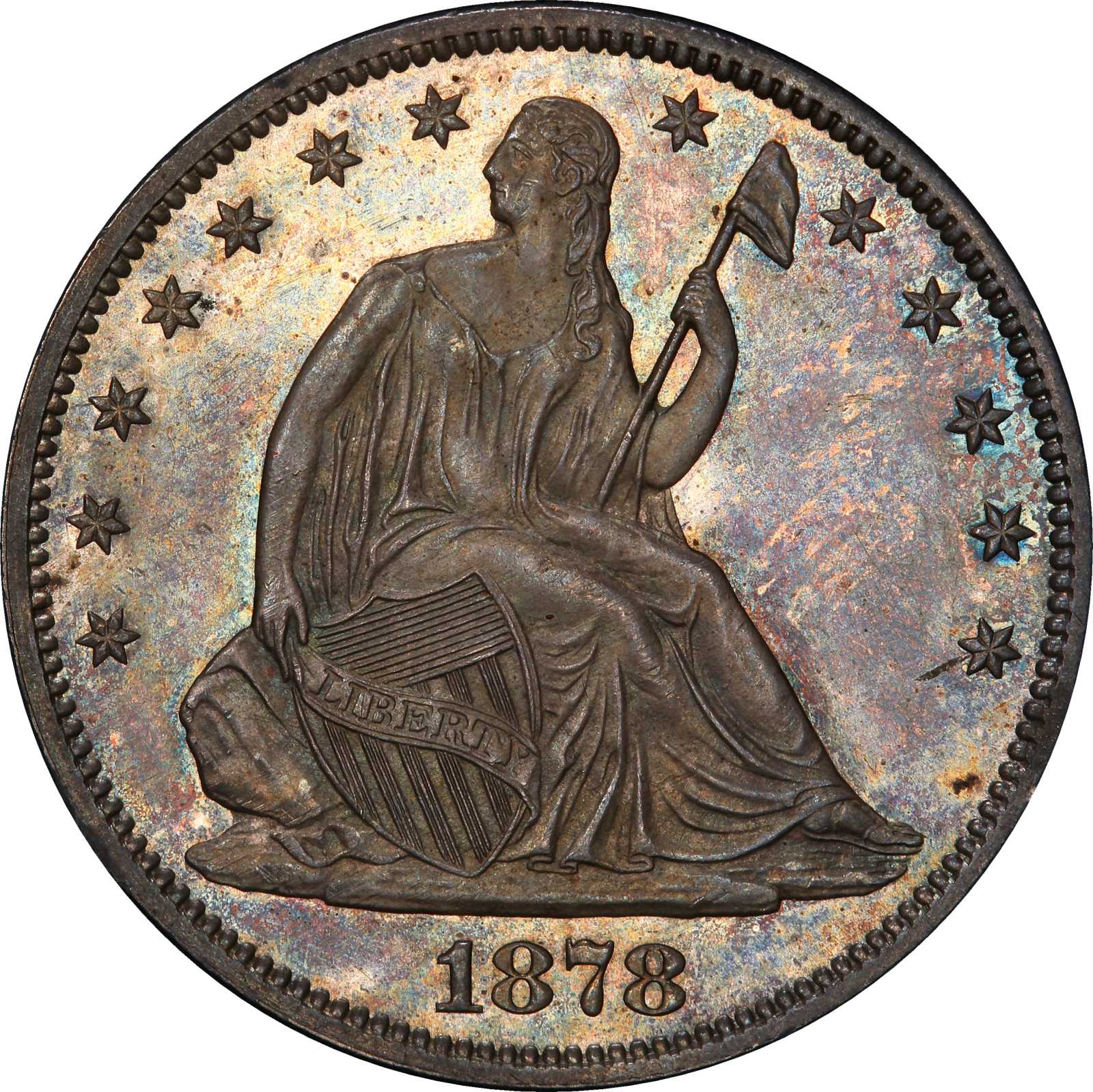 1878-S Liberty Seated Half Dollar. WB-1, the only known dies. Rarity-5. MS-66 (PCGS). CAC. Beautiful pearl gray and silver-mauve patina and iridescent undertones can be seen on both sides of this extraordinary Gem. Razor sharp detail is noted throughout and the surfaces are lovely and frosty. This is an extraordinary example of an issue that is highly elusive in all grades.The conditions that created the extreme rarity of the 1878-S half dollar date to the Civil War and the hoarding of all forms of coinage, especially gold and silver. When the anticipated quick Union victory in 1861 never came, some larger Northern banks became nervous and ceased paying out gold for paper money at par, thus beginning the mass hoarding of coins that would last for the duration of the conflict. Even the surrender of the Army of Northern Virginia at Appomattox Court House on April 9, 1865 and the collapse of the Confederate government failed to end the hoarding. Consumer confidence was shaken and it would take much of the early Reconstruction period for it to become more stable.In the early 1870s, great quantities of silver continued to flow eastward from the vast riches of the Comstock Lode, this process made easier with the rapid expansion of the railroads. This and certain international factors caused a plummeting of the price of silver, which had the effect of prompting some previously hoarded silver to come out of the woodwork. As silver became even cheaper in relation to gold, a drive to eliminate bimetallism and move to a strict gold standard grew. In February 1873 the Coinage Act was passed, which had the principal effect of demonetizing silver coin and eliminating a silver dollar for domestic use. With the end of bimetallism came the elimination of the strictly regulated issuance of silver coins, leading to the "Free Silver" movement, allowing the government to inject even more silver into circulation to combat the effects of the Panic of 1873. Consequently, large quantities of subsidiary minor silver coins were produced throughout the mid-1870s, resulting in a sharp decrease in the need for new coinage by 1877.The silver barons of the Western states were now burdened with large amounts of a precious metal that was becoming not so precious. They banded together and convinced several senators to pass the Bland-Allison Act of February 28, 1878, which re-established the domestic silver dollar (and eliminated the trade dollar except in Proof format), and required the Treasury to purchase between $2 and $4 million worth of new domestically mined silver bullion every month to coin specifically into silver dollars. Importantly, the silver could not be of foreign origin nor could it be recycled.The effect of the Bland-Allison Act on the half dollar was swift and dramatic. While 1,377,600 were minted in Philadelphia in 1878, at the Western branches almost all production switched immediately to the Morgan dollar. Carson City managed 62,000 half dollars but at San Francisco only 12,000 were struck. A single pair of dies was all that was required to coin the 1878-S half dollar and all bear the same diagnostic raised lump at the top left of the first open stripe on the reverse shield. This feature is found on all genuine specimens and can be seen even on low grade examples. For those patient enough to count them, all 1878-S half dollars have 147 reeds on the edge, different from the edge reeding used at the other mints that year.The 1878-S half dollar is one of the legendary key dates of the entire Liberty Seated series and was recognized as a true rarity not long after it was issued. In the West, silver coins were popular, heavily used and tended to enter circulation largely unnoticed. However, fairly early on the rarity of the 1878-S half dollar became apparent especially when collecting by mintmark became popular in the 1890s. According to P. Scott Rubin, the earliest record of an 1878-S half dollar appearing at auction was in 1882. Nineteenth century numismatist Augustus G. Heaton remarked in 1893 in his highly influential treatise, <em>Mint Marks, </em>that with the "1878 we have the <em>great rarity</em> of the San Francisco half dollar coinage." Today, the estimated number of survivors in any grade is 50 and 60 piece.Residing at the very pinnacle for this legendary rarity is the Pogue Collection 1878-S half dollar. It is an astonishing example of a great numismatic rarity that is certain to go down in history when it crosses the auction block.Stacks Bowers Galleries thanks Bill Bugert for the provenance information that he provided on this coin. From the D. Brent Pogue Collection. Earlier, from our (Stacks) sale of the Howard D. Egolf Collection, May 1961, lot 1131; our (Stacks) sale of the R.E. Cox, Jr. Collection of Half Dollars, April 1962 Metropolitan New York Numismatic Convention Sale, lot 2024; our (Stacks) sale of the Dr. E. Yale Clarke Collection, October 1975, lot 352; our (Bowers and Ruddys) Fairfield Collection sale, October 1977, lot 552; our (Stacks) sale of the Robison Collection, February 1982, lot 1721; our (Stacks) sale of the Queller Family Collection of United States Half Dollars, October 2002, lot 678.