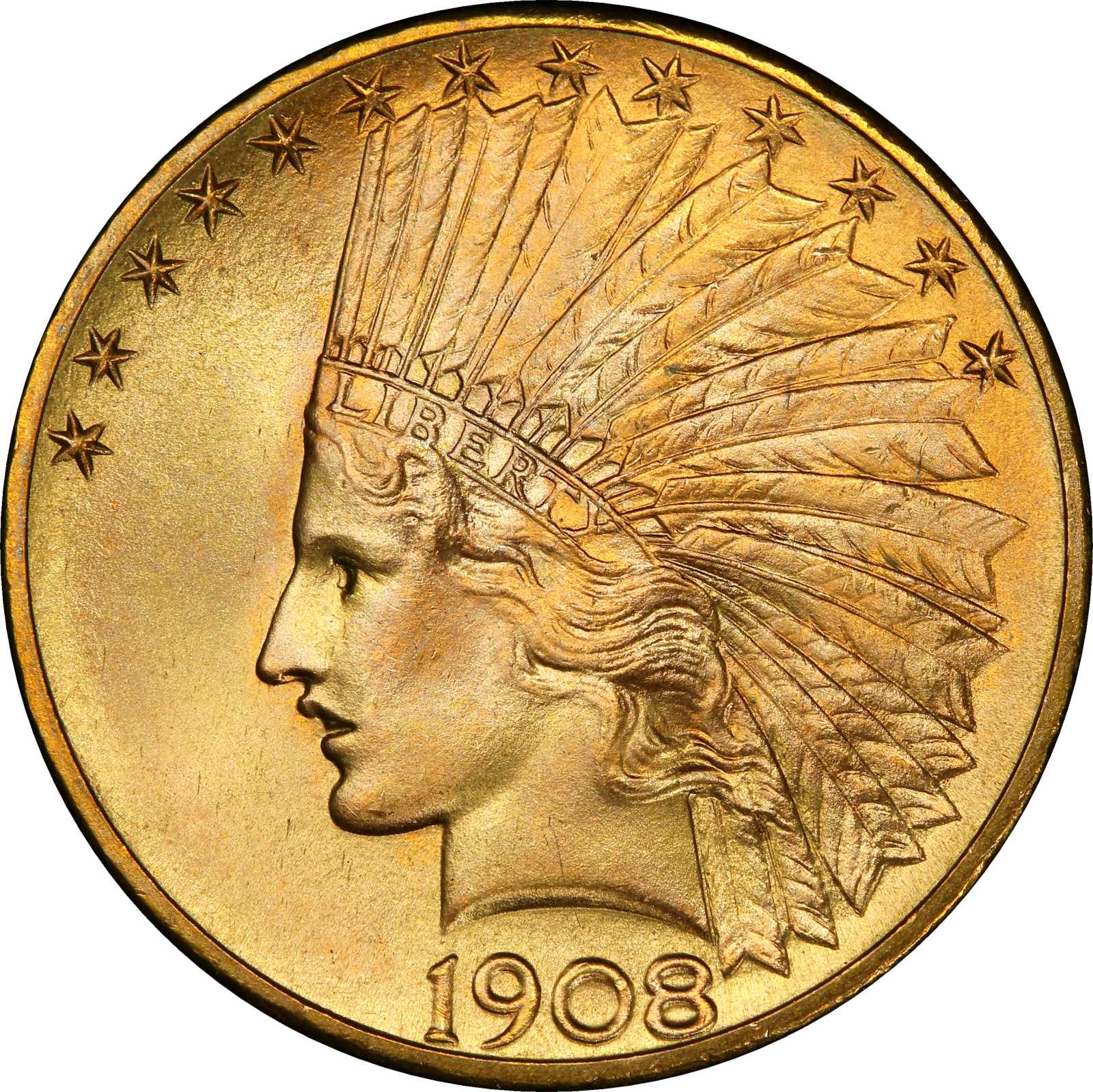 1908-D Indian Eagle. Motto. MS-68 (PCGS). CAC. Both sides of this truly remarkable coin display lovely mint frost. The surfaces have a delightful fine grain texture, enhanced by vivid orange and olive-gold patina. Essentially perfect and a strong contender for the title of finest known 1908-D Motto Indian eagle.Even after all the growing pains experienced getting the 1907 Saint-Gaudens eagle into production, there was one more challenge to be overcome. President Theodore Roosevelt felt that the inclusion of the motto IN GOD WE TRUST on coins was sacrilegious and believed he could have the motto left off of the newly-designed coins. The coins without the motto entered circulation in late 1907 and 1908 and immediately caused controversy among members of the public who took up the issue with Congress. In response, Congress passed legislation mandating its inclusion on all coins going forward. Later in 1908, Charles Barber added the motto on both the eagle and double eagle, as well as a few other minor modifications.On August 12, the Denver Mint began production of the 1908-D With Motto eagle, eventually coining 836,500 pieces, roughly four times as many as those without the motto. The mintmark was usually hand applied in this period, so numerous minor placement varieties exist. On the 1908-D No Motto coins the D mintmark was very broad and bold, located above the leaves of the branch at the same angle as the rim in that area. When the Motto was added, the mintmark placement was lowered to near the end of the fasces below the leaves, where it remained for the duration of the series. Many of the newly struck coins entered circulation in the West where gold was generally preferred over paper. They saw frequent use and received the commensurate amount of wear until they were withdrawn from circulation and melted beginning in 1933. As with many of the larger denomination gold coins of the early twentieth century, quite a few were used in international commerce where they spent long periods of time in large sacks with other gold coins where suffered abrasions and bag marks. Beginning in the 1940s and 1950s and continuing to this day, many of these coins returned from their foreign sojourns. Finding a Mint State 1908-D Motto eagle that rises above the Choice level can be challenging. While PCGS CoinFacts provides an estimate of approximately 900 Uncirculated examples extant, they also indicate that perhaps as few as 40 of those are at the Gem level or finer. At the summit are two astonishing MS-68 examples recorded at PCGS and a single example at NGC (though it is not certain if this is a resubmission). Our (Stacks) January 2004 sale of the Wm. Thomas Michaels Collection PCGS MS-68 specimen as lot 3007 brought $86,250 and has not been offered since. The present coin has an illustrious history of its own. Jeff Garrett notes that it was obtained directly from the Mint at the time of issue by George Clapp where it remained until his collection was sold to Louis E. Eliasberg in 1941 in a deal brokered by Stacks. It was sold as lot 848 in the October 1982 Bowers and Ruddy sale of the Eliasberg Collection. Its last appearance at public auction was in April 2006 in Heritages sale of the Duckor Collection where it was obtained by D. Brent Pogue. Tonight, one select bidder will be able to add their name to this illustrious pedigree that can trace back to the day it left the Mint. From the D. Brent Pogue Collection. Ex George H. Clapp, acquired directly from the Mint; Clapp estate; Louis E. Eliasberg, Sr., via Stacks, 1941; our (Bowers and Ruddys) sale of the United States Gold Coin Collection (Eliasberg), October 1982, lot 848; Heritages sale of Indian Eagle Selections from the Dr. Steven L. Duckor Collection, April 2006 CSNS Signature Auction, lot 3884.