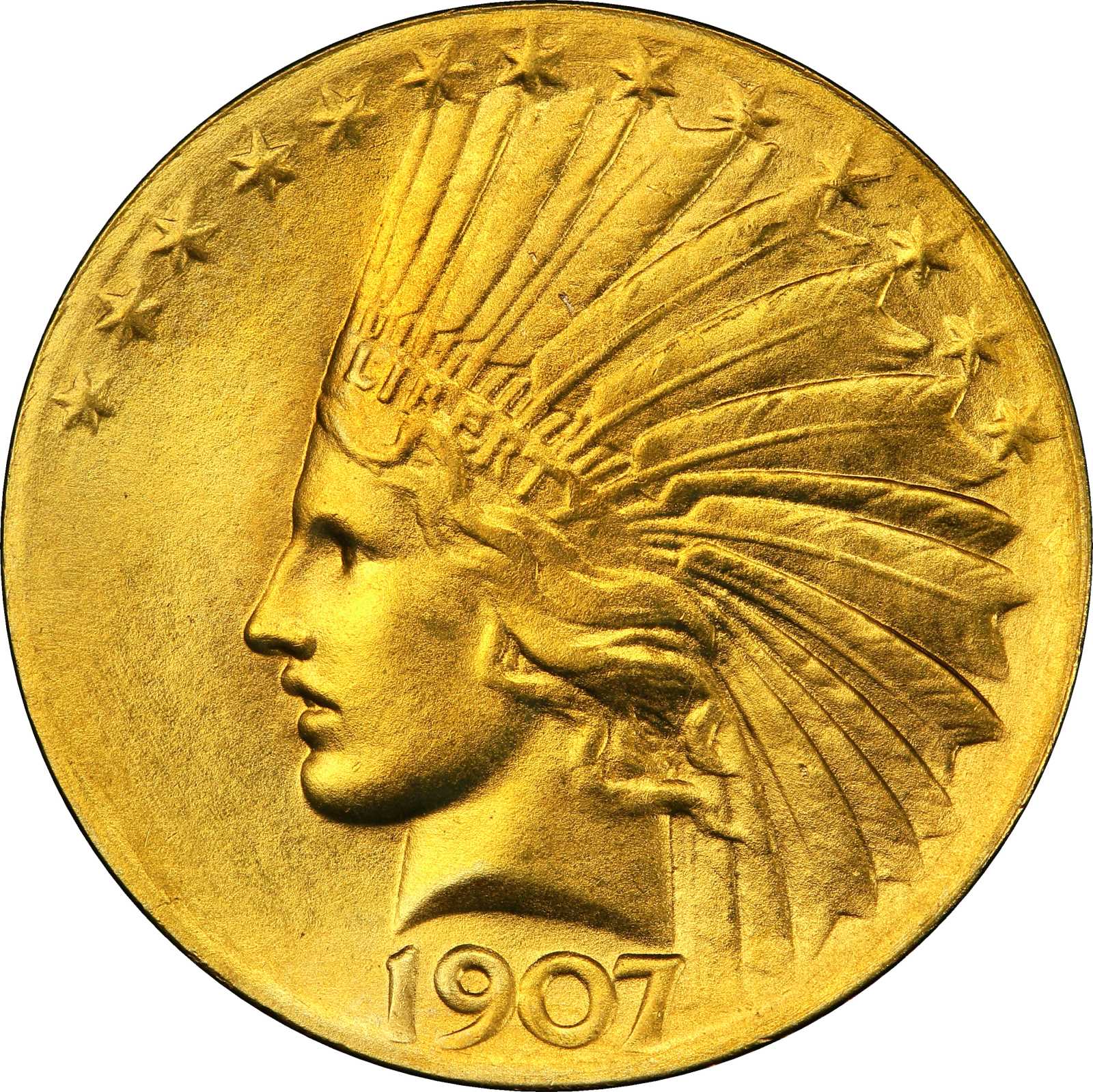 1907 Indian Eagle. Wire Rim, Periods. Judd-1901, Pollock-1995. Rarity-3. Raised Stars on Edge. MS-67 (PCGS). Delightful golden-yellow surfaces are satiny to softly frosted with a pristine appearance. The strike is full with razor sharp detail throughout the design. This is easily one of the most beautiful examples of this classic Indian eagle design type that we have ever had the privilege of bringing to auction.The Saint-Gaudens gold eagle is widely considered one of the high water marks of American numismatic design. President Theodore Roosevelt was a fierce critic of the then-current coin designs and in order to improve them he conspired with Cornish, New Hampshire artist Saint-Gaudens to redesign the entire series of coins. Saint-Gaudens produced several designs including an obverse he originally intended for the cent. When Roosevelt saw this design, he recommended - ordered, really - that the left facing bust of Liberty should wear a war bonnet instead of a laurel wreath. Saint-Gaudens made the change in February 1907 but thought it should be used for the double eagle rather than the cent. Again Roosevelt objected as he preferred a representation of Liberty walking forward for the largest denomination. Instead the bust of Liberty wearing a feathered headdress would go onto the eagle. The reverse design for the eagle was a modified version of the "defiant eagle" Saint-Gaudens had used on Roosevelts inaugural medal of 1905.Plaster models were prepared in Saint-Gaudens studios in Cornish and were sent to Philadelphia on June 1 to be converted into working dies. They encountered immediate opposition from Chief Engraver Barber (no fan of non-Mint personnel designing coins), who felt there were design deficiencies, especially the high relief nature of the design and the lack of a proper coin rim. He was focused more on mass production than coin aesthetics and felt "the models now sent are not coin relief," as he told Mint Superintendent John Landis on June 7. By now, Saint-Gaudens was seriously ill with cancer and did not travel. Instead he worked with the Mint through his assistant, Henry Hering. Hering reworked the models to reduce the relief somewhat and change the date from Roman numerals. The new models were provided to the Mint on June 24 and dies were prepared. By July 19, the dies were ready to strike experimental versions of the new design.The first coins struck were in high relief despite Barbers requirements to the contrary, with the portrait of Liberty set within a concave field similar to how a medal might look. The features were also more sculptural with a distinctive soft texture. In addition, because of the high relief, the coins required several strikes to bring up the design. As a result, a "fin" or "slight burr" on the edge caused the coin to not rest flat, especially since the eagle tended to rise up above the border. Now gravely ill, Saint-Gaudens continued to work through the design difficulties along with his staff. Roosevelt realized that the dream of a very high relief eagle was not feasible, and on July 29 he relented and directed the Mint to work on a lower relief version for mass production. Furthermore, in the same letter advised that:"As for the high relief coins, have several hundred struck and allow the collectors of the country to obtain specimens as you suggested, none to be issued until the new issue is out. They should be preserved as the work of a great American artist."Saint-Gaudens never saw his creation as a coin; he died of cancer on August 3 before any could be struck. Barber prepared a version while the Saint-Gaudens studio prepared their own revisions, coordinating with the artists widow, Augusta. Barbers Rounded Rim version began production on September 13 with the intention of going into circulation. Ultimately neither Saint-Gaudens original Wire Rim concept nor Barbers Rounded Rim version ended up as a circulating coin. The revision from the Saint-Gaudens studio in lower relief and with no triangular periods was adopted and was struck until 1933. In the meantime, to comply with Roosevelts July 29 order for several hundred Wire Rim coins, an initial production run of 500 coins took place in late August on the high-pressure medal press, followed by a delivery of 42 coins struck between September and December of that year. The Treasury Department in Washington, DC took delivery of the Wire Rim coins and distributed them to government officials, as well as to some of the biggest coin dealers of the day. Seventy examples remained unsold and were sent back to the Mint in 1915 to be melted down, leaving a final net production of 472 pieces.In keeping with the Pogue cabinets attention to outstanding quality, the present specimen is among the finest known of this historic issue, the one that most closely represents Saint-Gaudens and Roosevelts vision for the $10 gold coin. From the D. Brent Pogue Collection.