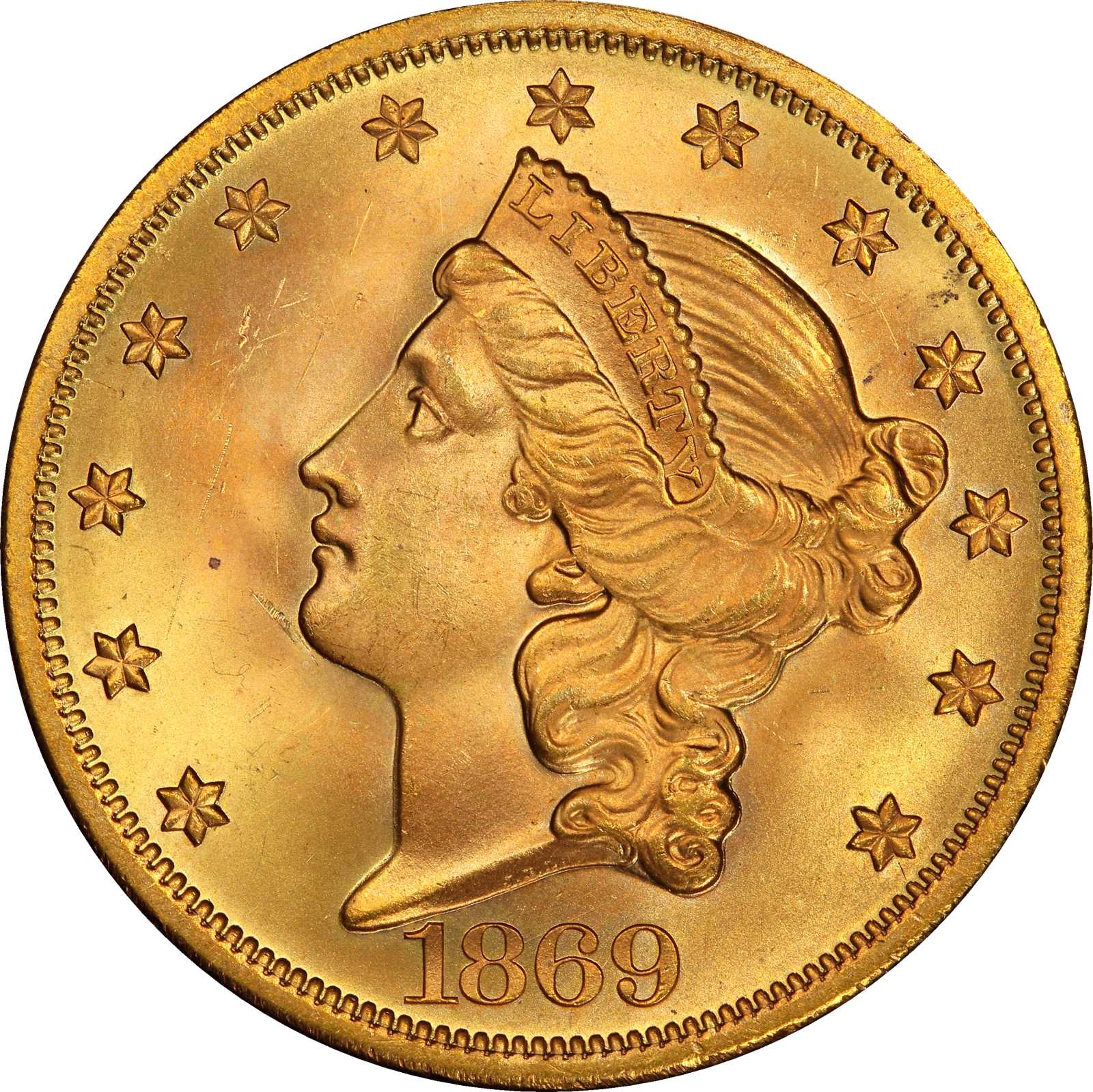 1869 Liberty Head Double Eagle. MS-66 (PCGS). Featuring lovely mint frost and richly original olive-gold patina, this is a truly remarkable Liberty Head double eagle irrespective of type or date. Pale rose highlights are evident and enhance the memorable eye appeal. With its razor sharp striking detail and virtually pristine surfaces, one has to admire this coin for its technical quality and visual appeal. Remarkable.The Type II double eagle as a whole is among the most challenging issues to obtain in high grade. The Type I double eagle is available in Uncirculated thanks in part to treasure recovered from ships like the S.S. <em>Republic</em>, S.S. <em>Brother </em><em>Jonathan</em>, and most notably the S.S. <em>Central</em> <em>America</em>. Even Type III issues can be found in moderately higher grades courtesy of repatriations of large quantities from overseas as well as efforts by well-positioned and well-heeled numismatists. This is not the case with the Type II double eagle where high degrees of preservation is much more rarefied and more by chance. The 1869 double eagle is no exception. In that year, 175,130 double eagles were struck at Philadelphia with an additional 686,750 at the San Francisco Mint. While many San Francisco-produced double eagles entered the channels of commerce, those coined in Philadelphia tended to be obtained by large banks or other trading firms who used them for international commerce, shipping them in large quantities overseas. Those that remained in circulation domestically experienced the typical rigors of commercial use and are generally found in EF to AU. Large quantities of the issue ended up in the Treasurys melting pots during the great meltings of the 1930s, leaving even fewer behind. After the Second World War, some of the coins that were shipped overseas found their way back to the United States, but only a few turned out to be in Mint State, almost exclusively between MS-60 and MS-62. Above that level and this issue is a major condition rarity. In the early 1980s in his landmark guide to gold coins, David W. Akers wrote that he was able to locate only seven auction listings of Uncirculated pieces in a survey of more than 400 major auction sales. The situation had not much improved by the time Q. David Bowers wrote in his <em>Guide Book of Double Eagle Gold Coins</em> in 2004 that he estimated a Mint State population somewhere between 15 to 20 different examples. Todays population reports and census figures allow a clear look at the grade landscape and it confirms what has been suspected for many years: the 1869 is exceptionally rare above Choice Mint State. NGC reports a single MS-63 specimen with none finer, while PCGS notes only four coins above MS-63. Standing at the very top is the Pogue coin in MS-66. In fact, so special is this coin that there are only two MS-66 Type II double eagles extant, and only one finer, the wondrous MS-67 1875-S also from the Pogue Collection. That this catalog features two of the three finest known Type II double eagles is an astonishing feat. From the D. Brent Pogue Collection. Earlier, from Heritages sale of the Gold Rush Collection, January 2005 FUN Signature Sale, lot 30073; Heritages sale of the Madison Collection, January 2008 FUN Signature Auction, lot 3319. 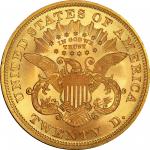