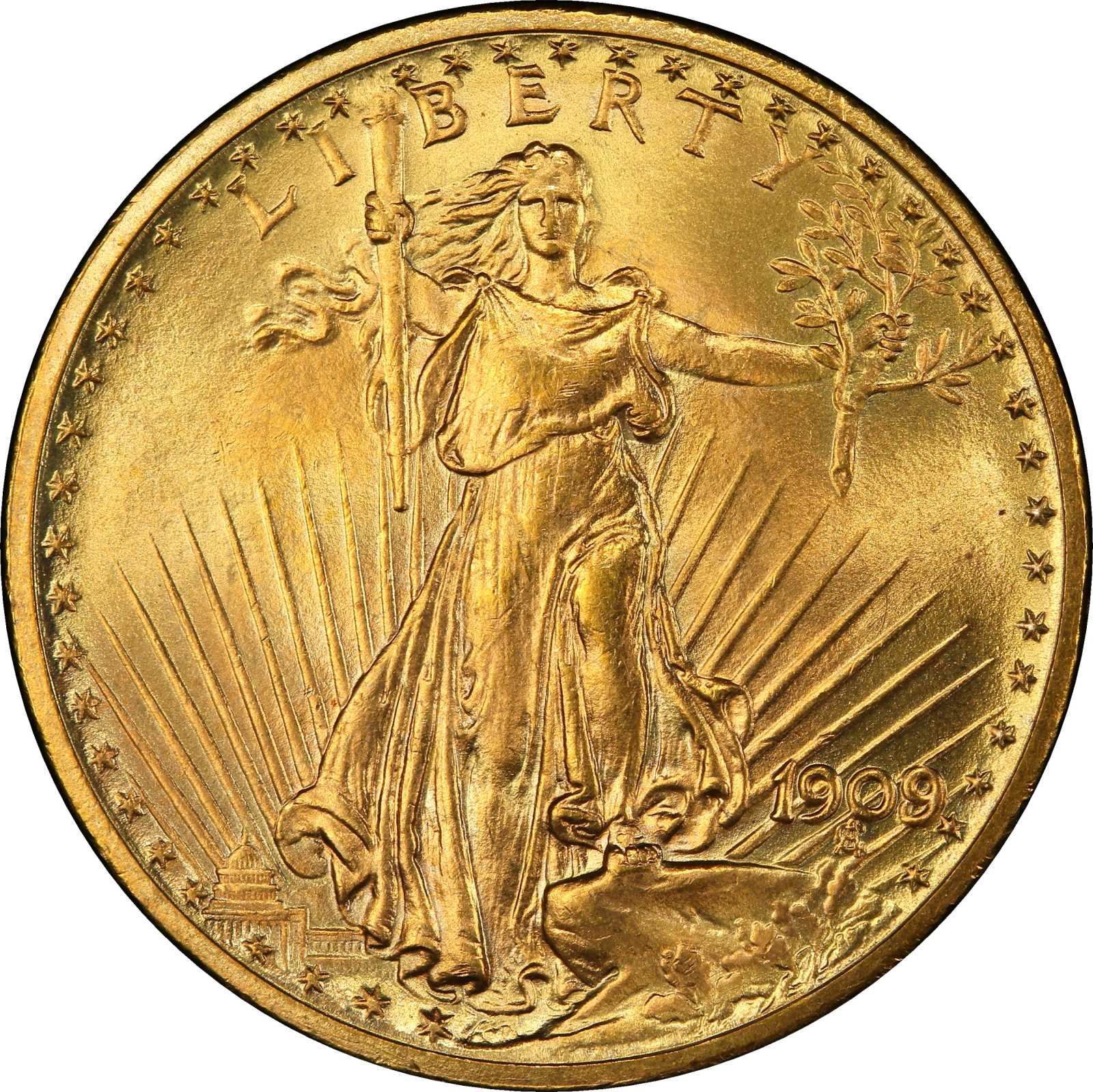 1909/8 Saint-Gaudens Double Eagle. FS-301. MS-66+ (PCGS). CAC. Both side of this premium Gem double eagle exhibit vivid medium gold and pale rose patina that provides truly outstanding eye appeal. The luster is full and frosty and the striking detail is very complete throughout the design for an example especially for this often poorly defined overdate. Expertly preserved and worthy of the finest double eagle cabinet.The 1909/8 Saint-Gaudens double eagle is unique in that it is the only overdate known for the entire series. The variety was created when the diesinker erroneously used a 1908 hub while preparing a 1909-dated working die. The diesinker then corrected this mistake and finished the working die with the correct 1909 hub, but failed to remove the earlier 1908 date, leaving it plainly visible to the unaided eye. Under normal circumstances, Chief Engraver Charles Barber would inspect each working die prior to use, but for some reason that must not have occurred here, considering the obvious overdate. The die was put into use and, according to Roger Burdette, anywhere from 10,094 and 44,730 coins were struck and subsequently entered circulation. Beginning in 1910, a new master date die was created and used from that point forward, essentially eliminating the possibility that such overdates would occur again. This may indicate that Barber became aware of the overdates soon after they were struck and sought to prevent it happening again. Soon after production, the overdate was noticed by numismatists and Edgar Adams made mention of the coin in the June 1910 issue of <em>The Numismatist</em>. Interest in the overdate was minimal at best until the early 1940s when Abe Kosoff began publicizing it. Wayte Raymond began including it in his <em>Standard Catalog</em> beginning in 1944 and it made it into the <em>Guide Book</em> with the very first edition in 1947. Since then it has become a mainstay of the series and desirable as the only overdate in the series and one of the few well-known double eagle overdates.The 1909/8 has roughly the same availability as its normal date sibling, though the overdate generally gets more attention. An estimated half of the surviving examples are Mint State, but all but a couple dozen are in the very lowest levels, seldom any finer than MS-64. At the Gem level, the 1909/8 is a challenge that eludes all but the most patient and diligent of numismatists. PCGS has recorded four grading events at the MS-66 level and just one finer, the MS-66+ coin offered here. At NGC, there are seven records at the MS-66 level but none finer, including with any additional qualifiers. For a collection where only the best will do, here is just such a coin. From the D. Brent Pogue Collection. Earlier, from Heritages FUN Signature Sale of January 1999, lot 8470; Heritages CSNS Signature Auction of April 2006, lot 4580.