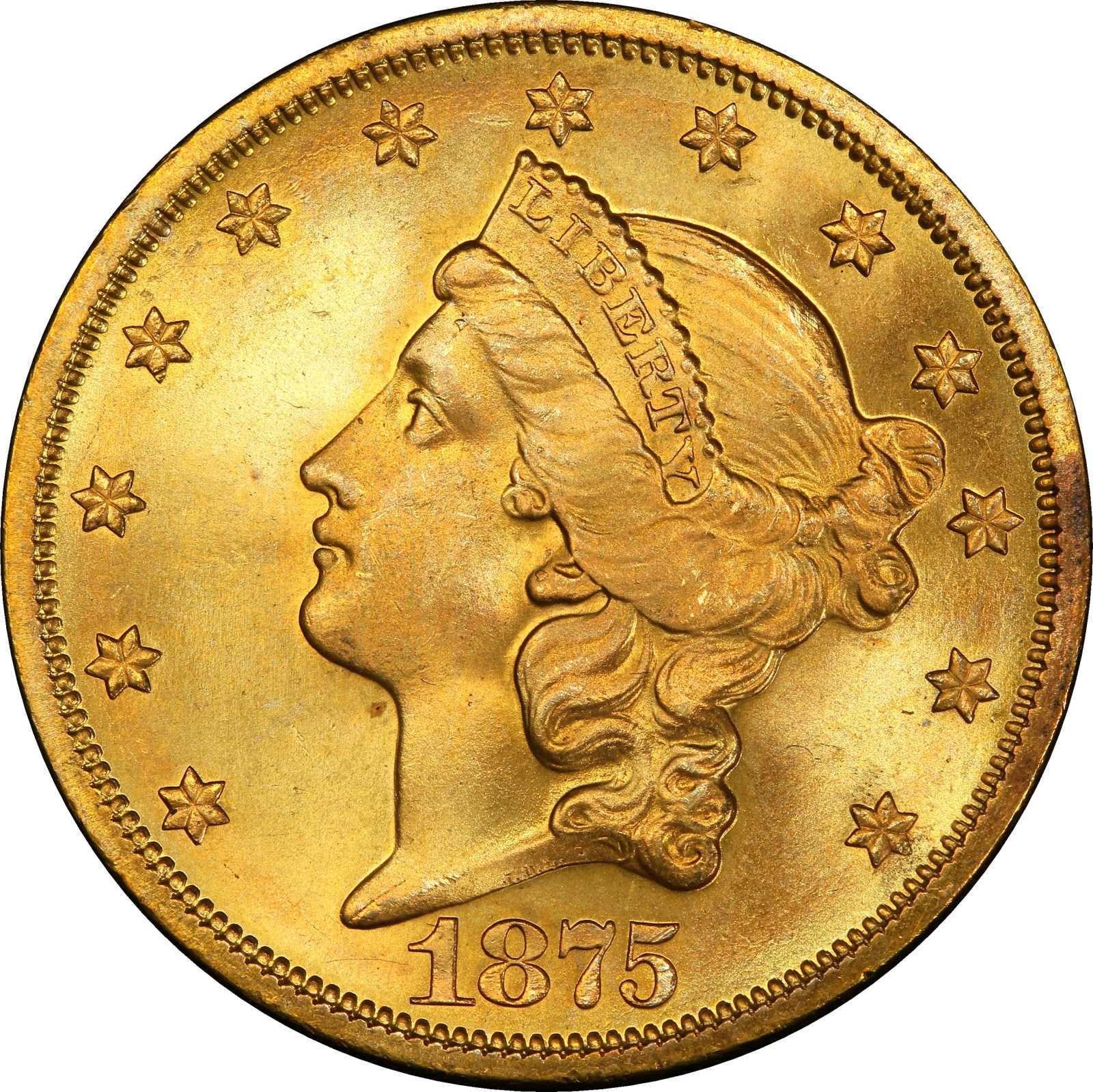 1875-S Liberty Head Double Eagle. MS-67 (PCGS). CAC. San Francisco was a perfect destination for bullion from the Comstock Lode and the gold fields of California, as well as large quantities of bullion from around the Pacific Rim. By the late 1860s it soon became apparent to Treasury officials that the first San Francisco Mint building was not able to handle the steadily increasing volume of incoming bullion. In 1869, the government located a site at Fifth and Mission Streets and by the end of 1874, the "Granite Lady" was ready and equipment from the old mint was moved into the new building. Limited coinage operations began in December. The production of most gold denominations in 1875 was at best minuscule and includes some notable numismatic rarities. Only the double eagle was coined in any significant quantities at Philadelphia, Carson City, and San Francisco, and then almost entirely to satisfy foreign demand for the denomination. The newly built facility at San Francisco coined 1,230,000 double eagles. Many 1875-S double eagles made their way to mostly European banks and treasuries soon after production; even those that went into circulation often ended up in sacks for overseas transport in later years. The coins were moved around receiving a wide range of scrapes, dings, abrasions, and other forms of damage. Those that remained in the United States later ended up in the Mints furnaces during the extensive melting that took place after the Presidential Gold Surrender Order in 1933.When 1875-S double eagles that had been shipped overseas returned in the twentieth century, a significant number of Uncirculated examples were among those repatriated coins. Several thousand 1875-S double eagles are believed to exist in all grade levels. Even though PCGS CoinFacts provides an estimate of 1,025 individual Mint State survivors, almost all are between MS-60 and MS-62 and seldom any finer.

At the MS-63 level, the issue is extremely scarce and at MS-64 it is a formidable condition rarity. If it were not for the very special coin offered here, the finest known specimens would not even reach Gem status.The Pogue Collection Superb Gem 1875-S is the finest known by three full grade points. Precisely how this coin was so carefully preserved compared to the rest of the issue is not certain, but clearly deliberate care was taken, suggesting that the coin may have been directly obtained from the Mint. It was one of the highlights of the James A. Stack, Sr. Collection, sold by Stacks on March 15, 1995 as lot 715. There, the cataloger described the coin:"1875-S Superb Gem Brilliant Uncirculated.

Outstanding quality, possibly the finest business strike Type II Double Eagle known. An exciting opportunity for the discriminating collector. Double Eagles were the yeoman workhorses of the US gold coins in the 1870s: major bank transactions involved large numbers of Double Eagles, for example. Consequently, almost all the $20 Gold that survive from this period are circulated and the few that are not are in grades lower than choice. This specimen is, without a doubt, one of the finest we have ever had the privilege of handling.

To the best of our recollection, we have not auctioned a finer example, nor have we ever seen one to equal this coin. Both sides are a lovely, bright, light orange yellow gold in color. The mint luster is complete and makes perfectly formed cartwheels on both sides. The surfaces are frosty and lustrous and are virtually undisturbed by breaks in the frosting. A short section of deep coppery toning along the obverse rim at 3 oclock will serve to "hallmark" this extraordinary coin. Here is a prize, indeed, for the truly advanced collector of double eagles."In that sale, when the coin was raw, it brought a record-setting $82,500. The coin has since been certified at both services, accounting for the presence of the MS-67 records at both PCGS and NGC. It later received a CAC sticker for exceptional eye appeal. The coin was sold by private treaty in January 2009 for $575,000, another record price for a Type II double eagle.As a class, the Type II Liberty Head double eagle is the most challenging of the three types to locate in the higher degrees of preservation, so much so that only three coins exceed the MS-65 level in total, two of which are represented in the Pogue Part VII catalog. This 1875-S double eagle stands as the finest of all Type II double eagles. History will likely be written when this remarkable coin crosses the block. From the D. Brent Pogue Collection. Earlier, from our (Stacks) sale of the James A. Stack, Sr. Collection, March 1995, lot 715; Oreville Collection.