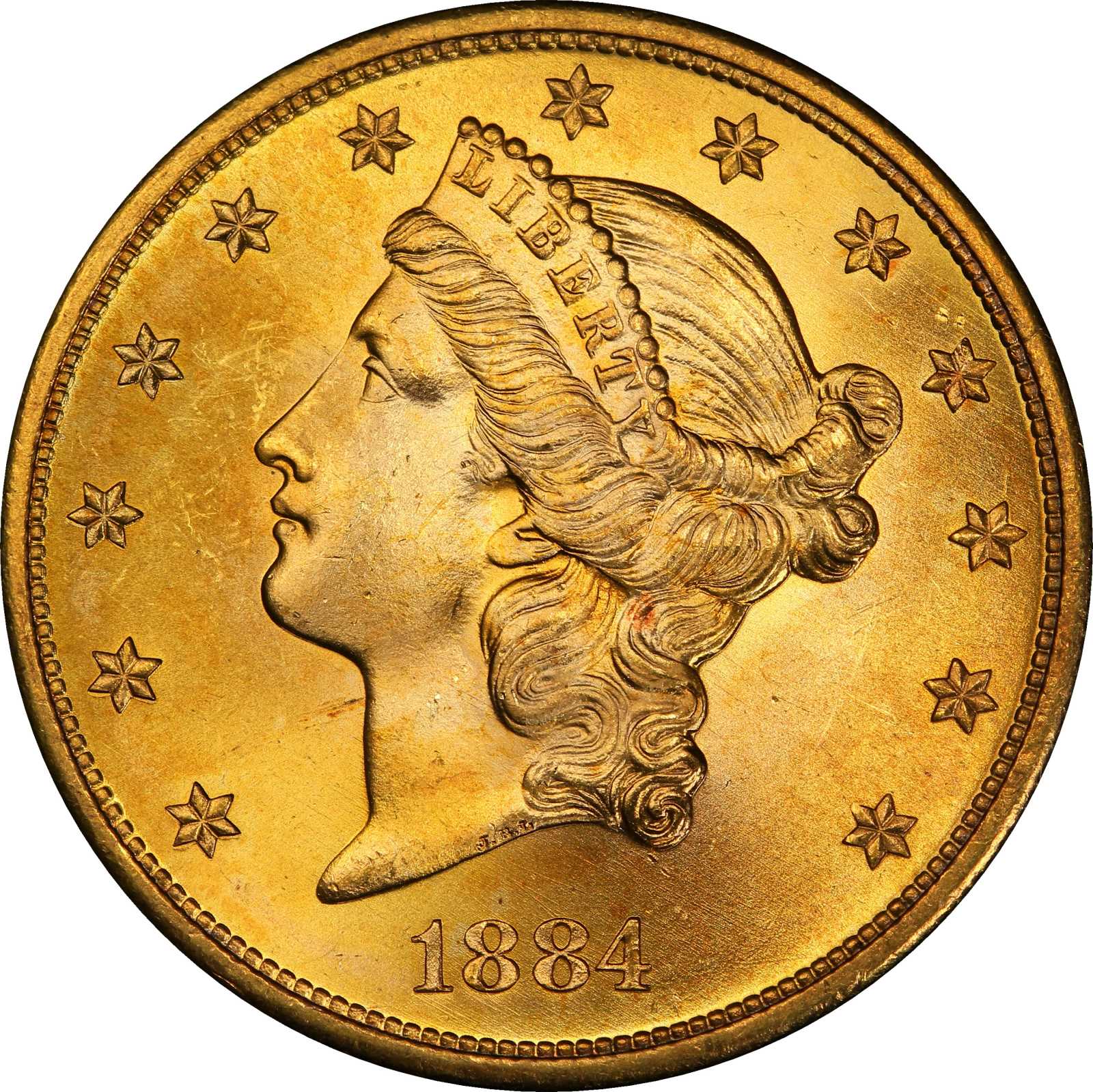 1884-S Liberty Head Double Eagle. MS-65+ (PCGS). CAC. This San Francisco Mint double eagle offers a razor-sharp strike, vivid rose-orange patina and swirling mint luster. It is expertly preserved, more so than usually seen for this issue. This is a phenomenal Type III Liberty Head double eagle that stands tall among the gold highlights in our current offering of the Pogue Collection.Most of the double eagles struck at San Francisco in the 1880s served one of three purposes: for commercial use, as financial reserves, or for international trade. Paper currency was generally not trusted on the West Coast and therefore gold coins (especially double eagles) were the preferred medium for larger transactions. These coins tended to remain in circulation for years, eventually exhibiting the signs of use. Many ended up in the large-scale melts in the 1930s after gold was demonetized as a means to restore the economy during the Great Depression. The few that survived tend to be in the circulated grade levels. With the 1882 introduction of gold certificates for general circulation (earlier issues were more for bank and government use), gold coins were held in reserve by the Treasury for redemption. Because the smallest denomination gold certificate at the time was the $20 note, the obvious choice for storing reserves, when ingots were not used, was the double eagle. These coins saw little use - perhaps a few were released into circulation from time to time - and when the Treasury began melting down gold coins, these were among the first into the melting pot.It is to the world of international commerce that the majority of todays double eagles trace their origins. Paper money was not desired by overseas financial institutions, governments, and large business concerns since there would always be the question of ease of redemption. Governments in particular preferred large gold coins for their own reserves and with the enormous output of double eagles from the United States, considerable numbers of them flowed overseas. They were frequently obtained directly from the Treasury so many freshly struck coins were transported across the ocean via steamship in large sacks of 1,000 pieces each with no regard for careful handling. Once at their intended location, they were shuffled around, counted, moved some more, recounted, and the sometimes rebagged, each time getting more dings and bruises. After World War II, large quantities started to make their way back to the United States, a process that continues to this day. The 916,000 examples of the 1884-S double eagle are no exception. When first examined closely by the numismatic community, most examples seen were in lower grades with very few Uncirculated examples turning up. David W. Akers in his landmark 1982 double eagle treatise could only account for a few dozen Mint State coins. By 2004 when Q. David Bowers wrote his <em>Guide Book</em> on the denomination, that estimate grew to a couple thousand Mint State coins, almost entirely coming from overseas stashes. As the coins were examined, one important pattern emerged, most are heavily abraded and in lower Mint State grades. The 1884-S is an exceptionally challenging issue to locate any finer than MS-63. PCGS has only certified two coins at the Gem level, an MS-65 and this, the sole MS-65+ in the PCGS Population. This dazzling example from the Pogue Collection stands far above the crowd and represents an important bidding opportunity for advanced double eagle enthusiasts. From Heritages Dallas Signature Coin Auction of October 2006, lot 3290; Heritages Charlotte ANA National Money Show Auction of March 2007, lot 2291; Heritages Milwaukee ANA Signature Coin Auction of August 2007, lot 2036.