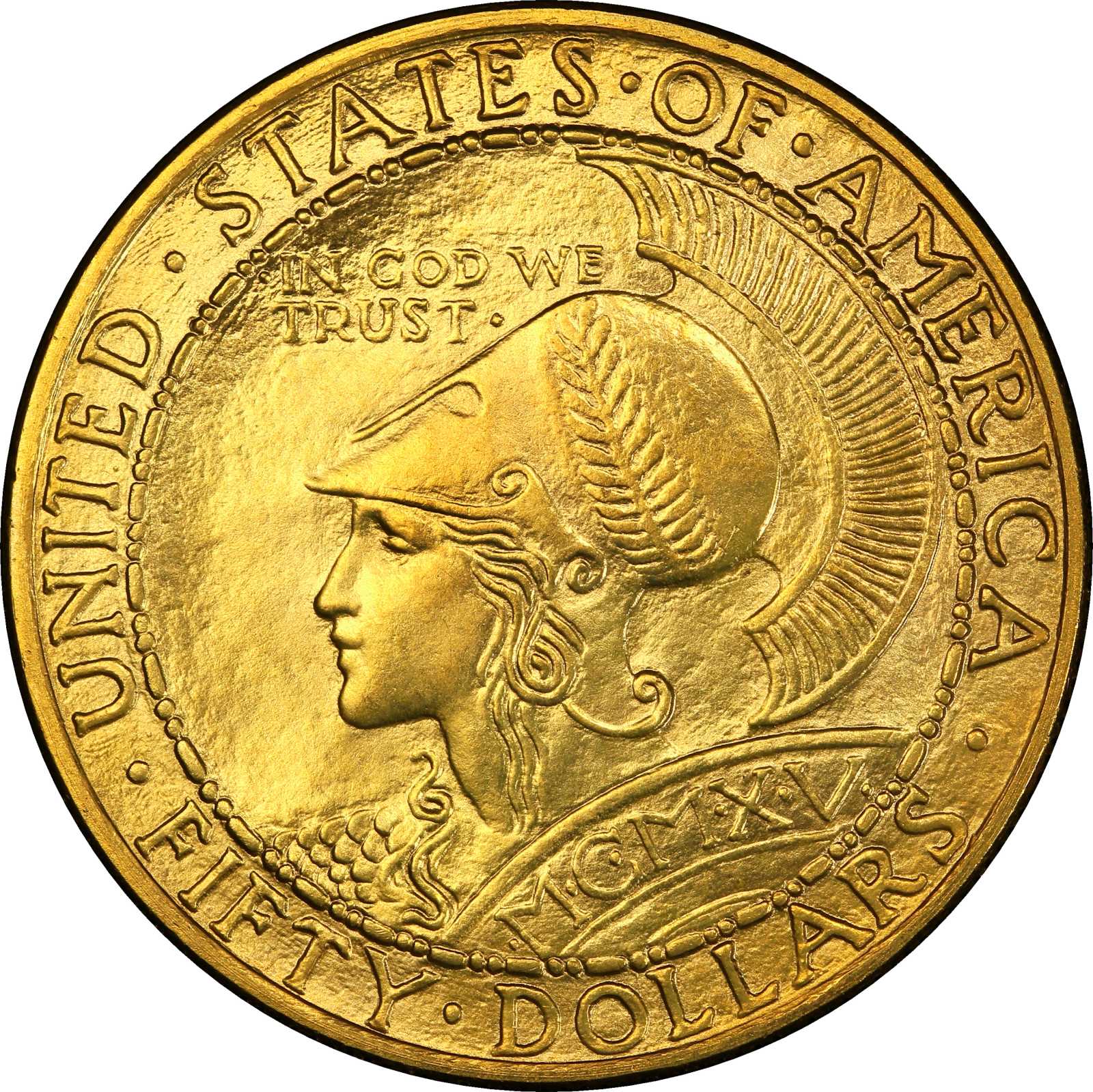 1915-S Panama-Pacific Exposition $50. Round. MS-65 (PCGS). Exceptionally well preserved surfaces are silky smooth in all areas, including at the center of the obverse, where Athenas cheek is virtually pristine. Blended medium gold patina and appealing mint luster blankets both sides and provides outstanding eye appeal.While most commemorative coins of the early twentieth century were half dollars, a few other denominations were seen as well. However, for the Panama-Pacific International Exposition held in San Francisco in 1915 an ambitious set of five coins was proposed and struck. The largest were two $50 gold pieces, one round and one octagonal, that featured very similar designs.As noted under our description of the Panama-Pacific half dollar from the Pogue Collection, the center of this extraordinary set of coins was legendary numismatist Farran Zerbe. Zerbe served as president of the American Numismatic Association from 1908 to 1910 and was a well-known promoter of numismatics with a big personality to match. Often controversial, Zerbe brought many new numismatists into the fold through his traveling "Money of the World" exhibit, which would later form the basis of the Chase Manhattan Money Museum. Because the Mint did not yet market directly to the public, the Panama-Pacific commemorative coins were offered at the exposition through Zerbe. Zerbe arranged to have a special 14-ton hydraulic medal press capable of 450 tons of pressure shipped from the Philadelphia Mint for the production of the huge gold coins. Initially, Zerbe did not have any of the new commemorative coins to sell, only an official bronze medal and some souvenir sheets provided by the Bureau of Engraving and Printing. By May, the half dollars were ready and soon the other denominations were available.Seeing potential in sales of various combinations of the various denominations, Zerbe offered the coins individually and in various set combinations, as well as jewelry accessories and even volume discounts. The $50 gold pieces were sold for $100 each and came in a leather case. There was also a four-piece set that comprised the three lower denominations and the purchasers choice of either the Round or the Octagonal $50. If the buyer didnt want to choose between the two, a five-piece set with both $50 coins was available for $200. Finally, the most extravagant set was a ten-piece set that provided two coins of each denomination to display both the obverse and reverse concurrently. There is some debate as to whether or not these massive sets were actually sold or were instead reserved for dignitaries. The sets were housed in special copper frames that are almost as eagerly sought today as the coins themselves. Despite all of Zerbes ambitious marketing, sales were slow. There had been a minor financial panic the year before and with World War I raging in Europe, many people who could afford the steep prices for these commemorative coins, especially the massive $50 coins, were reluctant to do so. The Octagonal $50 sold the best of the two though not by much. Only 483 of the round $50 coins were ever distributed and the rest were melted. Accordingly, the Round $50 is far and away the lowest mintage commemorative issued by the United States Mint. The $50 coins were frequently mishandled by non-collectors, resulting in nicks, dings and hairlines. Examples at the Gem level are among the rarest of the rare. For the classic period commemorative collector, this is an incredible $50 gold commemorative that will certainly be the centerpiece of any twentieth century gold collection. From the D. Brent Pogue Collection.