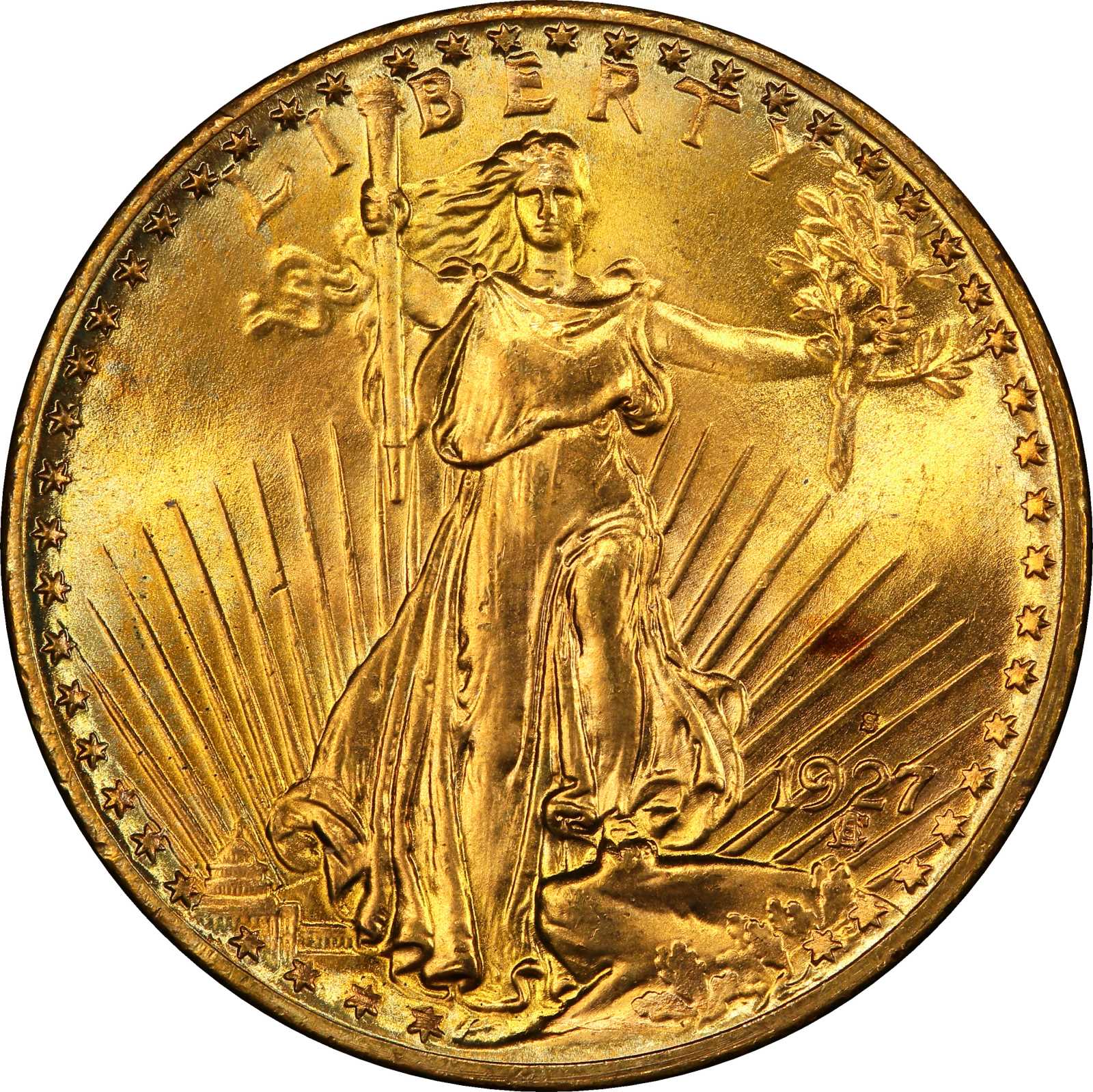 1927-S Saint-Gaudens Double Eagle. MS-67 (PCGS). CAC. The incredibly beautiful surfaces of this San Francisco double eagle are covered in lovely mint frost and vivid golden-orange patina. The strike is razor sharp throughout, and both sides are as nice as would be expected at the assigned grade. Free of even the most trivial handling marks, a small alloy spot in the lower right obverse field is mentioned solely as an identifying feature.For the numismatist assembling a date set of Saint-Gaudens double eagles, the later issues present a formidable challenge, even when the 1933 double eagle is excluded. Most were struck at the Mint then immediately set aside in Treasury vaults where they sat until the early 1930s when they were sent right back to the Mint for melting down into ingots. The 1927-S is typical of these late issues. The mintage of 3,107,000 pieces would ordinarily suggest a very common coin, but of these three million, only 3,750 were actually delivered to the Federal Reserve or to large commercial banks. A little more than 3,000 were retained for assay purposes, and the balance - just under 3.1 million coins - were immediately sent into storage then destroyed without having seen the light of day.The rarity of the 1927-S was suspected by the numismatic community even as early as the 1930s and 1940s. The numismatic viewpoint from the 1940s for the issue is exemplified by B. Max Mehl who described the Uncirculated example in his April 1949 sale of the Dr. Charles W. Green Collection thus:"Another great rarity. Almost as rare as the 1926 S. I believe there are no fewer than three or four specimens known. In 1944, when the first specimen was offered at the Bell Sale, the coin cataloged for only $125.00 yet it brought $500.00...Two years later, in 1946, another specimen appeared at auction in the "Worlds Greatest" Collection. The coin then cataloged for $175.00, but it brought $925.00. While it is true that a specimen sold for less last year, but I think the coin is just as rare as it ever was and it is well worth its former highest record if not more."World War II changed the situation markedly. Large quantities of double eagles started returning to the United States, something that still occasionally happens. While a few formerly rare issues were now increasingly available, the 1927-S did not surface in any appreciable numbers and certainly not enough to remove its status as a rarer issue. PCGS CoinFacts provides an estimate of 225 examples believed extant, almost all of which are in the lower Mint State grades showing evidence of their extended stays in bank bags. Roger Burdette in his excellent 2018 work on the series indicates the number may be closer to 300. Fewer than two dozen may be safely called Gem or finer and they are among the most avidly sought coins by double eagle specialists. Combined, there are three grading events at the MS-67 level at both of the major certification services, though it is unclear if these represent resubmissions. Of all the recent auction appearances for the 1927-S, the Morse-Duckor specimen offered here is the only MS-67 so far noted. This coin has an unbroken chain of custody reaching back to when it was first obtained directly from the treasurer of the United States in 1927. Here is a very well preserved specimen of a truly rare issue. From the D. Brent Pogue Collection. Ex Treasurer of the U.S.; George Godard; Heritages sale of the Museum of Connecticut History Collection, June 1995 Long Beach Sale, lot 6027; Heritages sale of the Philip H. Morse Collection, November 2005, lot 6698; Heritages sale of the Dr. and Mrs. Steven Duckor Collection, January 2012 FUN Signature Auction, lot 4645; Heritages Philadelphia Signature Auction of August 2012, lot 5460; Heritages FUN Signature Auction of January 2013, lot 5966.