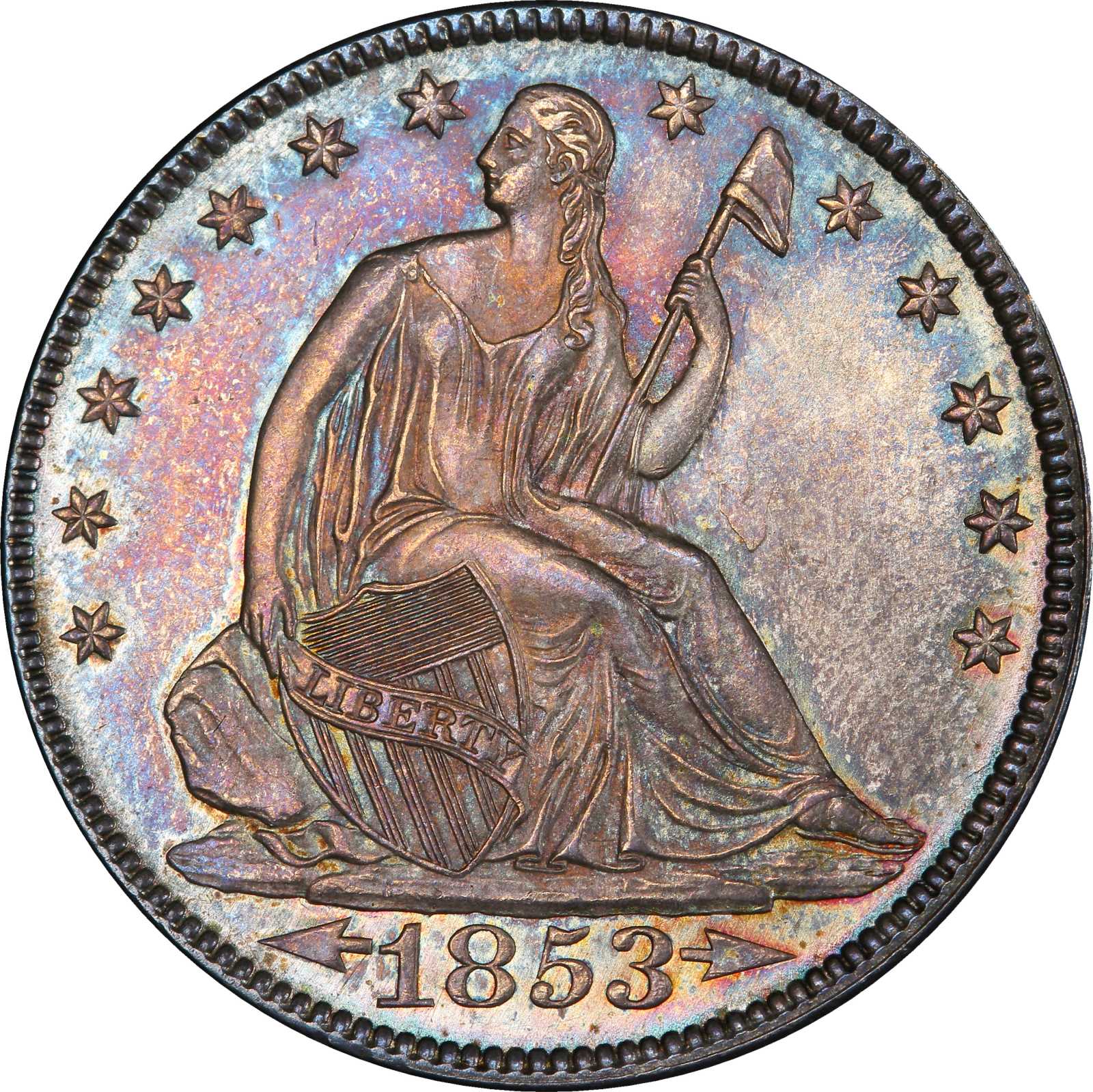 1853 Liberty Seated Half Dollar. Arrows and Rays. WB-101. MS-66 (PCGS). This handsome Gem exhibits blended steel-gray, salmon pink and champagne-apricot toning on the obverse. The reverse is even more vivid with cobalt blue, golden-apricot, salmon pink and silver-apricot iridescence. Sharply struck overall with bountiful luster and a satiny to softly frosted texture.In the period just prior to the California Gold Rush, gold and silver coins were valued at the ratio of 16 ounces of silver equaling 1 ounce of gold. The 1848 discovery of gold in Northern California and the subsequent injection of massive quantities of that metal into the economy made silver more expensive proportionally relative to gold. By the early 1850s, a dollars worth of current federal silver coins was worth $1.06, providing bullion speculators an opportunity to make a profit. Silver coins were obtained in bulk, melted down, then the bullion sold for gold at 6% profit, then that in turn could be used to obtain even more silver. This caused a loss of many silver coins from commerce. Congress debated solutions for a couple of years before action was finally taken in February of 1853. The weights of the half dime, dime, quarter, and half dollar were all reduced by enough to take the profit out of melting down the newly struck coins. To distinguish the new coins, arrows were added to either side of the date and for the two largest denominations, rays were added behind the eagle on the reverse. The new standard resolved the shortage as older heavier coins were sold as bullion to be coined into the new pieces. The Philadelphia Mint struck 3,532,708 of the 1853 Arrows and Rays half dollar and these went into immediate use where they saw extensive circulation, as did 1.3 million half dollars struck at New Orleans.For the type collector presented with only two issues of this one-year type, the Philadelphia coins are more available in higher grades than their counterparts from Louisiana, especially in Mint State. However, even lower-end Uncirculated examples can be scarce, though they are obtainable with perseverance. Beginning at the Gem level, the 1853 becomes an important condition rarity that seldom appears on the market. The appearance of an exceptional Gem specimen with the outstanding eye appeal of the Pogue example is a noteworthy event.