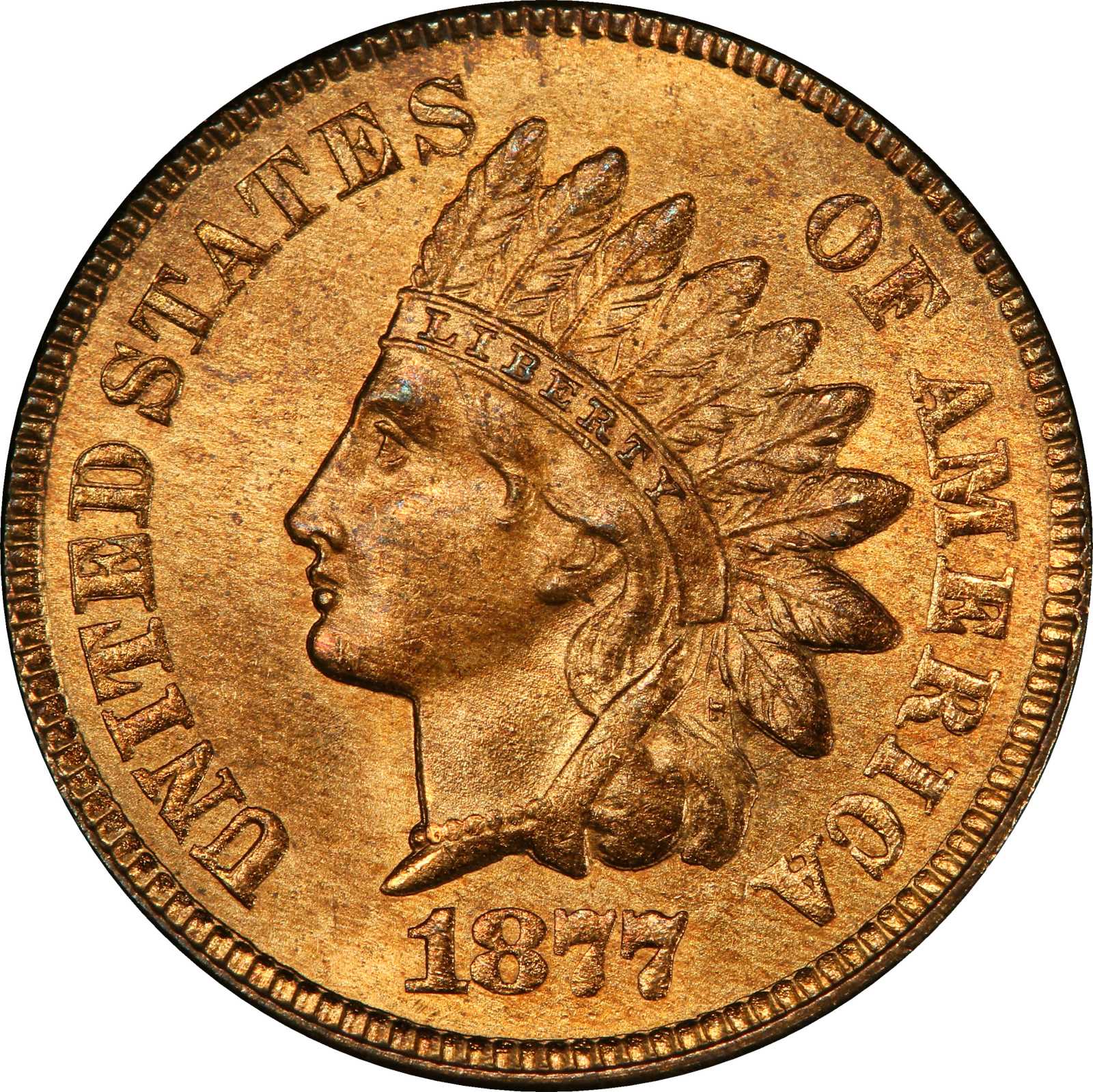 1877 Indian Cent. MS-65 RD (PCGS). CAC. Frosty mint orange surfaces are exceptionally smooth and well preserved for an example of this key date Indian cent issue. It is sharply struck with superior quality and outstanding visual appeal.Among small cent collectors, the 1877 Indian cent is almost as legendary as the 1909-S V.D.B. or 1955 Doubled Die Obverse cents. Its status resulted from several factors that combined for the "perfect storm" of rarity. The Civil War drove much of the nations coinage out of circulation, even though production figures for cents were considerable during the war years. These hoarded coins began to re-emerge during the early years of the Reconstruction period, and were joined by millions of new cents rolling off the Mints presses. Beginning in the 1870s, they clogged commercial channels, especially banking institutions. The coins were not required to be accepted in trade and as supply readily outweighed demand in daily use, they soon filled up bank vaults. To resolve this, Congress passed the Act of March 3, 1871, which now permitted redemption of base metal coins by the Mint, who would then use the metal to strike new coins. This, too, failed to resolve the issue since it essentially created a revolving door, replacing older cents with newly struck pieces. Beginning in 1874, the Mint began to simply reissue the redeemed coins that were suitable for use, rather than go through the process of melting and coining. New cent production dropped resulting in 9,908,148 cents being turned into the Mint in 1877, of which 9,821,500 pieces were cleaned and reissued. That was almost enough to satisfy the need for cents that year, requiring only 852,500 cents dated 1877 to be coined. These few coins quietly entered circulation along with the "reconditioned" earlier cents. This process of redemption and reissuing continued and while mintage figures rose in subsequent years, many 1877 cents were melted down. At the time, Proof coins adequately supplied numismatic needs and few regular circulation issues were preserved for posterity.By the time the true rarity of the 1877 cent was realized, the few that could be found were mostly very heavily worn. Most circulation strike 1877 cents encountered by todays numismatists are at the lower end of the grade scale. Mint State examples are scarce overall and of these, most are Brown or Red-Brown. Among the rarest of the rare are those that are designated full Red. The Pogue Collection example is a member of that exclusive club. The population figures listed below no doubt include a number of resubmission. This full Red Gem is worthy of the finest of cabinets. From the D. Brent Pogue Collection.