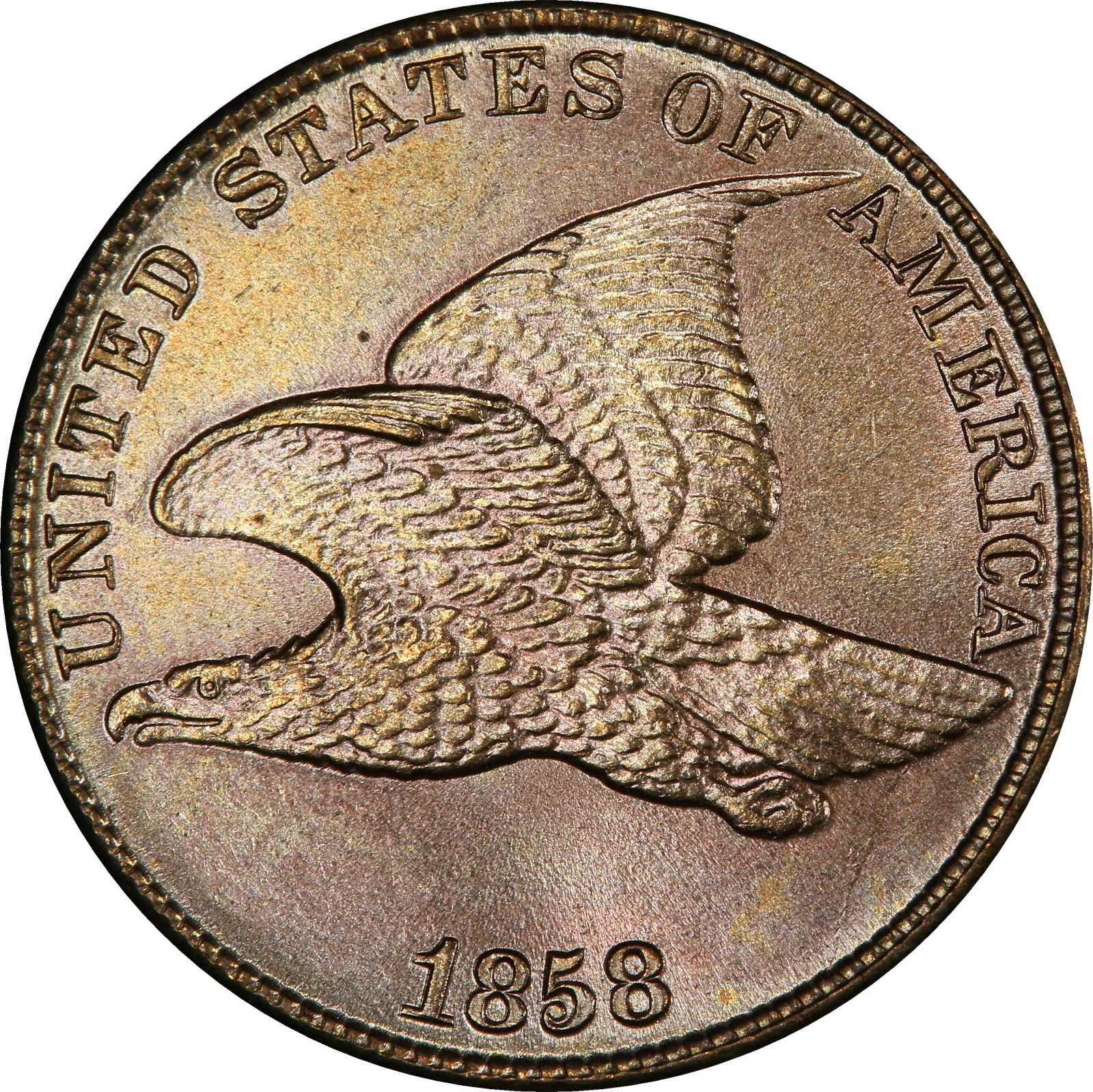 1858 Flying Eagle Cent. Large Letters, High Leaves (Style of 1857), Type I. MS-66+ (PCGS). CAC. The predominantly medium tan surfaces of this Flying Eagle cent are enhanced by intermingled blushes of pale rose and antique gold. This is a fully struck, highly lustrous Gem that would do equally well in a stellar quality type set or advanced collection of Flying Eagle and Indian cents.On May 25, 1857, when the new small cent was introduced into everyday use, a temporary booth was set up on the Mints grounds to exchange old large cents and half cents as well as the recently demonetized foreign silver coins, mostly in the form of Spanish colonial reales in various denominations. The changeover from the old large cents of days past to the new smaller Flying Eagle cents was a resounding success; lines of people went around the block waiting to exchange their coins. Soon the old large cents, familiar since childhood, were driven from daily use, along with the foreign silver coinage. Production of the smaller cents was stepped up from 17,450,000 pieces in 1857 to 24,600,000 the following year using dies prepared from two slightly but distinctly different obverse hubs. The first of these hubs - the Large Letters obverse - was originally used in 1857 and is most easily distinguishable from the later hub in that the letters AM in AMERICA are joined at their bases, while the second Small Letters hub has these two letters clearly separated. The Large Letters variety seems to have been produced in marginally larger quantities, though both have long been popular among cent specialists. Longacres graceful interpretation of the Peale-Gobrecht eagle design from 20 years earlier proved to have some fundamental deficiencies that caused problems in production as well as in circulation. Because of the way the eagle was situated in relation to the cereal wreath on the reverse combined with the relatively high relief of the design, the coins are usually found softly struck, causing an overall lack of details even in Mint State. Attempts to rectify the problem proved inconsistent, prompting Mint officials to quickly replace the entire design for 1859. Even though all 1858 Flying Eagle cents are readily available in most grades up through Choice Mint State, finding an especially well struck example is particularly challenging. This is especially so for the Large Letters coins, as there are very few at the Gem level of preservation. As is familiar with Pogue Collection coins, the present specimen is about as crisp and well preserved as can be imagined and stands out among its peers. From the D. Brent Pogue Collection. Earlier from Heritages Baltimore ANA Signature Auction, July-August 2008, lot 1519.