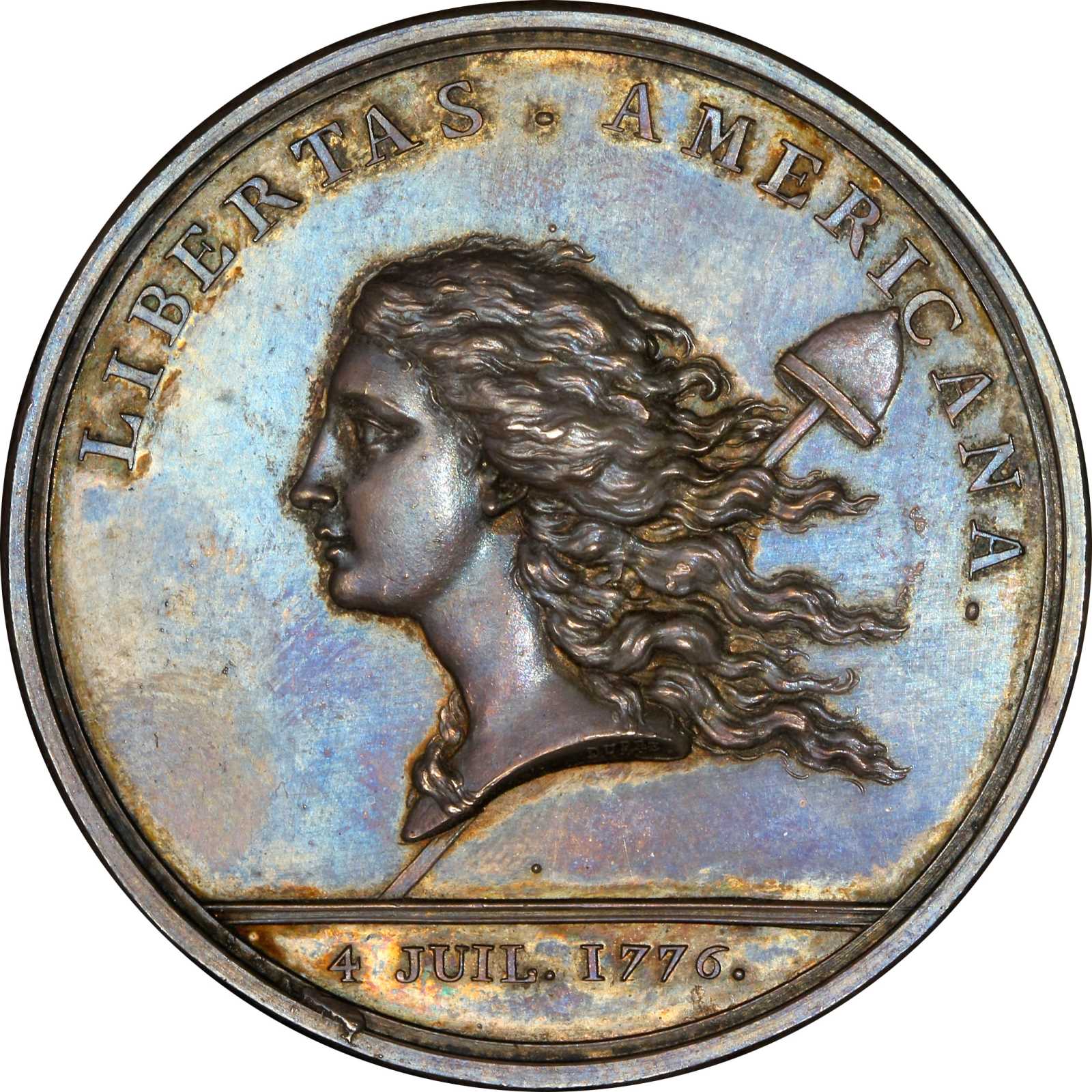 (1783) Libertas Americana Medal. Silver. Original. Paris Mint. Betts-615. MS-63 (PCGS). A specimen of incredible beauty and displaying the sort of quality associated with the Pogue name. Dusky blue and pale green tones contrast with the peripheral gold highlights. The sharpness is definitive, the reflectivity is assured and bold on both sides, and the visual appeal is magnificent. Some very minor hairlines are well hidden by the ancient toning, and no marks of any consequence are visible, save for a half-arc lintmark in the field left of Minervas knee.The quality of this piece is good enough to offer instructive evidence of die state. Spalling is present on the reverse below Minervas arrow, raised artifacts from the die that are fragile enough that any polishing or wear would render them invisible. A vertical spalling break parallel to Minervas hip (and the other associated spalling) is actually in an earlier state on the copper piece that follows than this one, confirming that at least some copper examples were struck before at least some silver Libertas Americana medals. This may prove to be uniformly true, or may not. The obverse spalling is clearly also in a slightly later state on this piece than the copper one that follows.The importance of the Libertas Americana medals history follows every specimen regardless of its condition, but it sure is easier to appreciate on one this pretty and well preserved. This was the finer of two silver specimens owned by John J. Ford Jr. It brought three times what his ex F.C.C. Boyd duplicate in silver brought in the following lot in the 2006 Ford medal sale. Silver medals were largely distributed to diplomats, high ranking officials, Franklins Parisian circle, and European institutions. While the original recipients were often people of wealth and prestige, few were numismatists, and most of these ended up heavily polished - treated the same way other silver objets dart would have been treated in such households. The typical grade for a silver Libertas Americana is in the EF-AU range, with many of the lightly polished survivors squeaking into the lowest reaches of Mint State. This example has largely avoided the typical misadventures, with superb color and surfaces that not one in 20 silver examples of this medal can claim.Benjamin Franklin conceived the Libertas Americana medal as a talisman of Americas birth, symbolic of both the ideals of the young nation and the military battles it had to endure - and the divine and terrestrial assistance it needed - to emerge victorious. This medal was his pet project from design to distribution, and every medal extant can sincerely assert a provenance back to Franklin himself.This example, typical of the Pogue Collection, is one of the very finest available to collectors today.This lot includes PCGS Photo Certificate Number 15611670 for this medal. <em>The certificate is available to the winning bidder upon request to Stacks Bowers Galleries at the close of the auction</em>. From the D. Brent Pogue Collection. Earlier, from Harry Forman on June 13, 1958; John J. Ford, Jr. Collection; our (Stacks) sale of the John J. Ford, Jr. Collection, Part XIV, May 2006, lot 289. 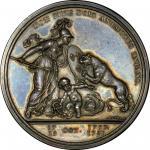