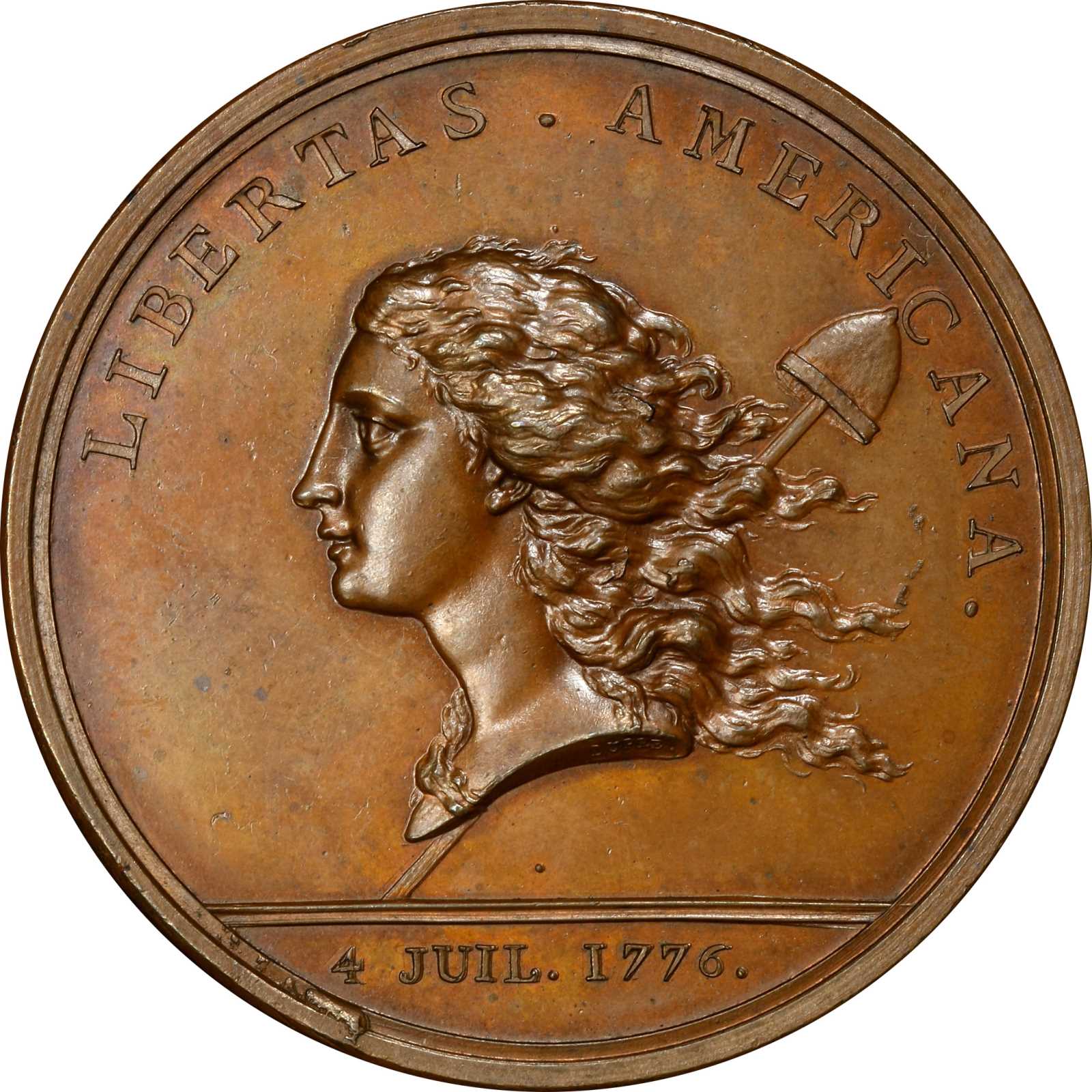 (1783) Libertas Americana Medal. Copper. Original. Paris Mint. Betts-615. MS-64 BN (PCGS). CAC. A pleasing match for the previous example from these dies, a remarkably handsome example of Americas most important historic medal. The fields retain their fragile reflectivity on both sides, giving full lustrous bloom to the rich chocolate brown toning and the pale rose, violet, and sea green highlights that appear throughout. The sharpness, assisted by two clear strikes, is absolutely definitive, fully realizing Dupres vision as engraved. A few scattered marks and specks are seen, none serious, though we note a few little old spots in the lower left obverse field and similar ones on the reverse below OS of ANIMOSUS and right of the period after OCT in the exergue. A curlicue lintmark is present in the lower left obverse field.All Libertas Americana medals are attractive, even the low-grade ones, but this one is nothing short of beautiful. There are lots of Libertas Americana medals in high grade holders, but even those certified at this lofty level rarely retain their full reflectivity, their original skin, and the freshness of a medal that has been handled with loving gentility since the time it was presented via the courtesy of Benjamin Franklin. The old sage thought the copper ones were the most attractive examples, and looking at this specimen its awfully hard to disagree.Ranked number one in the <em>100 Greatest Medals and Tokens</em> by a unanimous vote of those polled, if there was ever an American medal to include alongside the coins of the United States Mint, the Libertas Americana medal is the one. Its designs inspired the earliest Mint engravers and Mint Director Elias Boudinot received a silver specimen in his position as president of the Continental Congress at the time of this medals production. While most examples have been poorly handled over the years, this example would fit in with any cabinet of Gems.This lot includes PCGS Photo Certificate Number 15611669 for this medal. <em>The certificate is available to the winning bidder upon request to Stacks Bowers Galleries at the close of the auction</em>. From the D. Brent Pogue Collection. Earlier, from Richard Burdick, June 2009.