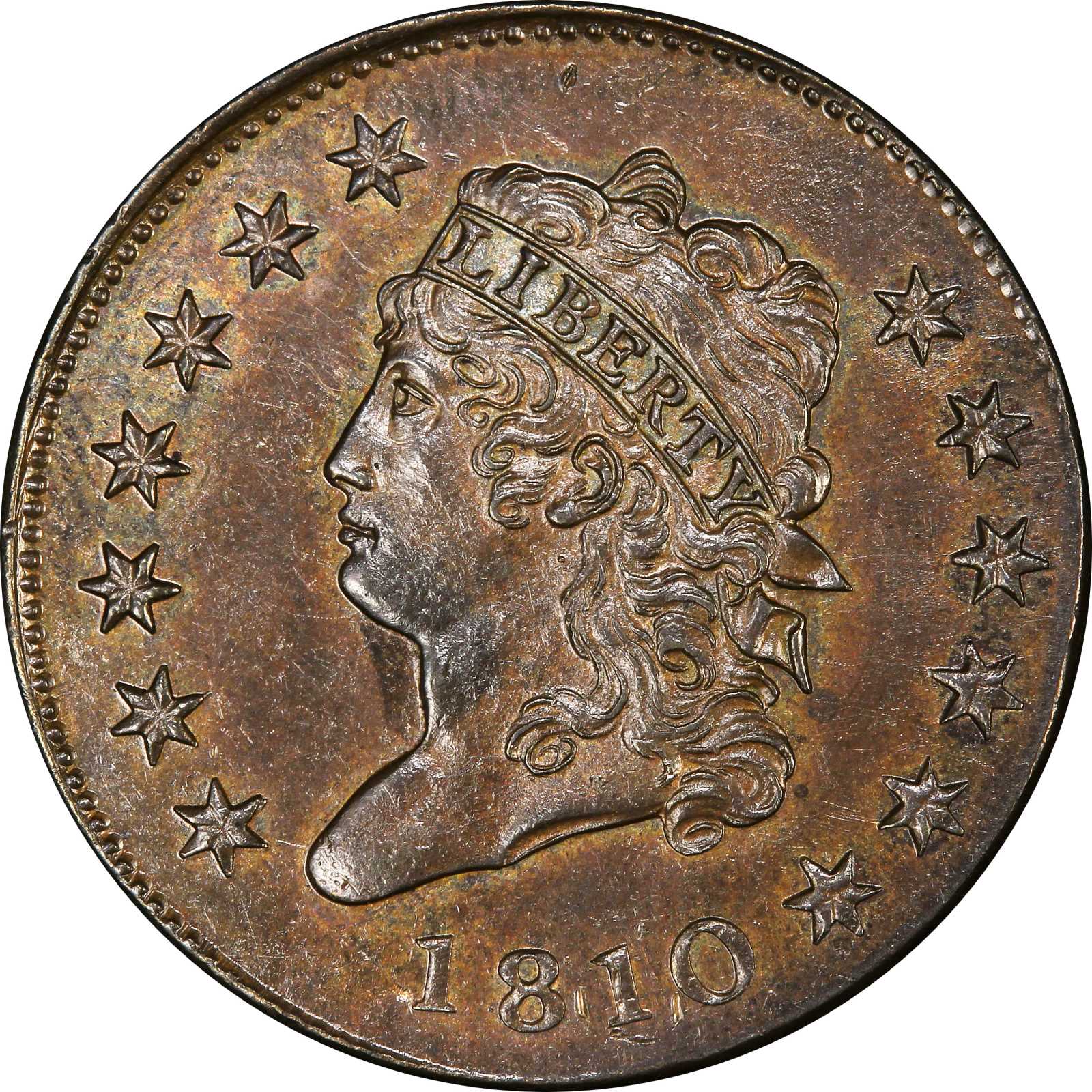 1810 Classic Head Cent. Sheldon-284. Rarity-3. MS-65 BN (PCGS). Generous faded mint color persists on highly glossy surfaces. Toned a splendid rich chocolate brown on the obverse, the reverse is a shade lighter, with passing cartwheel luster bringing shades of gold, faded red, and olive to the forefront. Some light multicolored iridescence is noted on the glossiest portions of the obverse, and an area of darker toning covers Libertys chin, lips, and throat. Scrutiny reveals only a few minor marks, including a cluster around the second 1 of the date, a short scratch under Libertys eye, a single nick above Libertys head, a few lines inside of star 12, and a short line above O in OF. A microscopic speck rests harmlessly at the base of the reverse. The obverse is aligned significantly to 5:00, raising a high rim around the denticles of the upper left obverse but leaving the denticles of the lower right completely off the planchet. The reverse is similarly aligned, with a high rim and long denticles at the lower left, while still showing the denticle tips at upper right. Faint clash marks are visible left of O of ONE and C of CENT, equivalent to Breens Die State II. Two thin lapping lines or fissures in the die face, one long and one short, run parallel below the left ribbon end at the base of the reverse.This coin illustrated the Sheldon-284 die marriage in both of Dr. Sheldons works on early cents, <em>Early American Cents</em> (1949) and its 1958 revised second edition titled <em>Penny Whimsy</em>. Though Dr. Sheldons numbers defined variety collecting for all subsequent generations, Sheldon himself would have called this Doughty 214, after F.W. Doughtys <em>The Cents of the United States: A Numismatic Study. </em>That reference, despite being difficult to use, was the only option for collectors seeking to attribute their 1795, 1797, 1800, and 1804 through 1814 cents until the late 1940s, when the partnership of George Clapp and Howard Newcomb, and then Dr. Sheldon, stepped forth with better products.Sheldon bought many, perhaps most, of the cents lovingly assembled by Henry C. Hines between 1906 and his death 40 years later. John W. Adams 1979 article on the Hines Collection remains the best source regarding its construction and dissolution, including the warning that since no inventory of the Proskey Collection exists, "Sheldon (and Downing) made a number of mistakes in attributing Hines cents to Proskey." Adams estimated that "more than half of the Hines pieces which ended up in the good Doctors first-line set were originally from Proskey," a group of coins that "formed the bedrock" of the legendary Hines collection. According to Adams, whose careful studies and connoisseurship are of a very high level, George H. Clapp considered Proskey "the most knowledgeable source on large cents he had ever met." By the time Hines bought his cents, Proskey had been a professional numismatist for over 40 years.This cents status as the plate coin in three of the most important works on early date large cents is a testament to its remarkable technical quality and exceptional visual appeal. It was given top ranking in the Breen/Bland census and in the 1991 Noyes reference, where it was chosen to illustrate this die variety. Reflective of the imperfect nature of Condition Census-style rankings, the position of this coin among the top three known has changed in different iterations of the Noyes census, though none of the coins involved have changed, only the taste of the list maker. It surpasses the Hain-Bird PCGS MS-65 S-284 on the Bland census, a new addition since this piece was offered in 2017. The DuPont-Reale-Bird S-285 is another additional MS-65 BN (PCGS) since the 2017 Pogue V sale, making this one of the top five examples of this date certified by PCGS, inclusive of all 1810 die marriages. From the D. Brent Pogue Collection. Earlier, from the David Proskey Collection; Henry C. Hines Collection, by sale, en bloc, 1916; Dr. William Sheldon Collection; R.E. "Ted" Naftzger, Jr. Collection, by sale, en bloc, April 1972; Eric Streiner, by sale, en bloc, via Stacks, February 1992; Jay Parrino; W.M. "Jack" Wadlington Collection, by sale, April 1996; Daniel W. Holmes, Jr. Collection, by sale, via Bob Grellman and Chris McCawley, June 2005; Ira and Larry Goldberg Coins and Collectibles, Inc.s sale of the Dan Holmes Collection, September 2009, lot 556, our sale of the D. Brent Pogue Collection, Part V, March 2017, lot 5134. Lot tags and collector envelopes with attribution and provenance notes included. 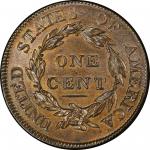