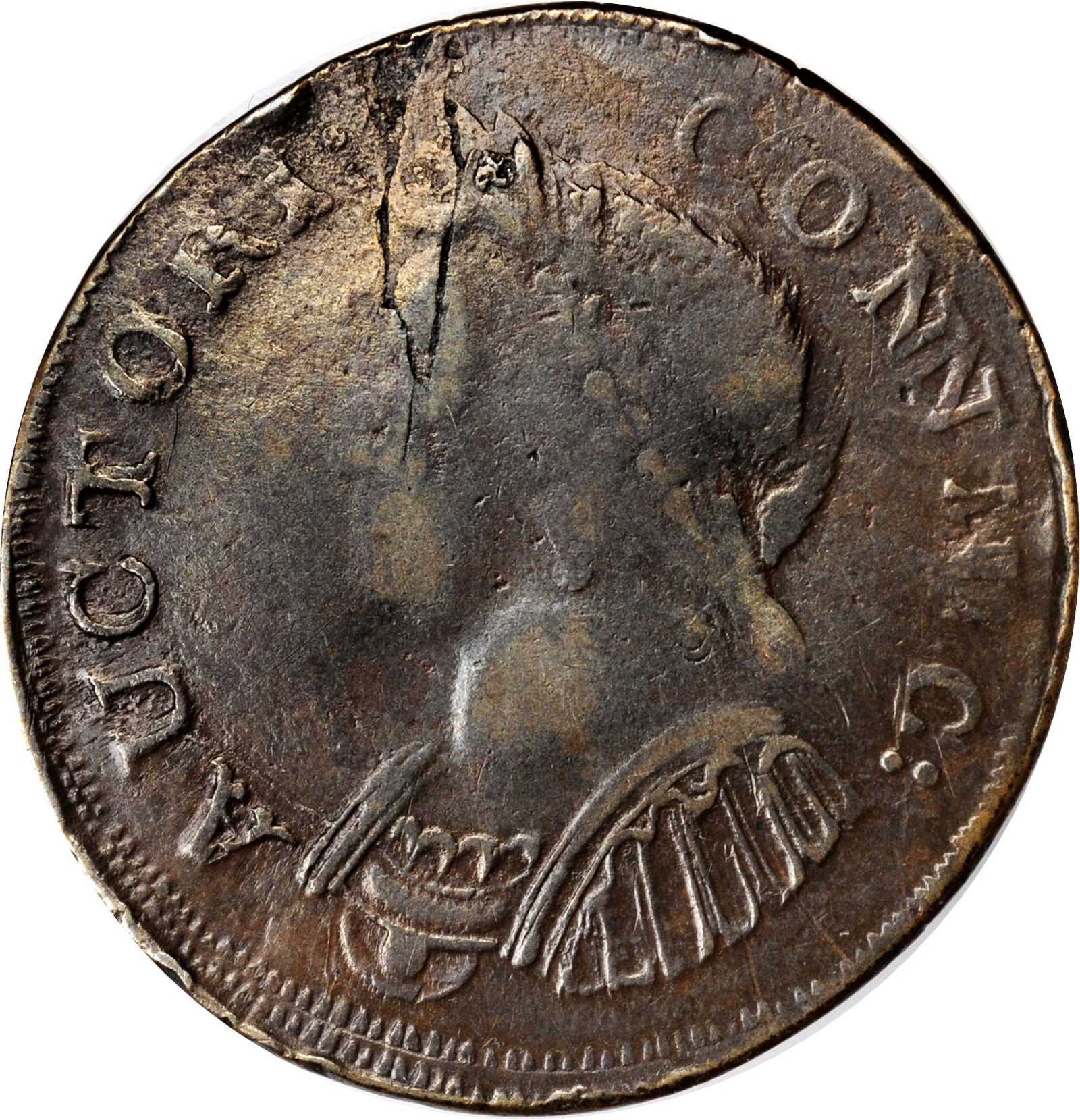 1785 Connecticut Copper. Miller 8-D, W-2455. Rarity-5+. Mailed Bust Left. Triple Struck—Partial Obverse Brockage. VF-30 (PCGS).143.6 grains. Not plated and given the terse description “Among the finest known” in its 1983 auction appearance, this coin is so much more than that. Glossy olive brown and thoroughly choice on both faces, with some areas of ruddier toning where perhaps the mint color was last to fade. Some minor rim and edge disturbances are noted from about 6 o’clock to 9 o’clock when viewed from the reverse, and a few thin scratches are well hidden in the small field between back of Liberty’s head and her pole arm; just a minor planchet flake is noted at upper obverse and is inconsequential in comparison to the often badly flawed planchets seen on other examples of 8-D. Distinctly ovoid in shape (28.7x29.8m), only a close examination reveals why—there are two closely overlapping strikes which vary in spread, but we surmise that what has caused the oblong shape is an off-center partial brockage most visible as the letters reverse letters AUC between INDE and Liberty’s drapery, as well as what appears to be part of the curved epaulet that starts below T L of ET LIB and curves into Liberty’s pole arm. Since no signs of this third strike are visible on the obverse, we believe that the off-center brockage was the first strike, obliterated on the obverse by the subsequent strikes, but the obverse brockage strike was preserved on the reverse because it is incuse. This superb error coin is also among the finest known examples—comparable to the 1975 EAC sale coin and the Rare Coin Review #14 coin but without their planchet imperfections, comparable to the primary Taylor and Robison coins but without their notably cleaned reverses; the Stack’s June 1987 sale appears to be finer, and the superb Newman example called “Choice Unc” in Robert’s notes and graded EF45 by NGC is the agreed upon finest known, and brought a deserving $12, 000 as such. Here is an example of one of the most splendid Miller 8-Ds known, one that is both visually attractive and technically fascinating.From the Robert M. Martin Collection. Ex Bowers and Merena’s Sale of the Marcus J. Brown Estate, November 9-10, 1983, lot 4667. This particular example was the subject of TN-146 in the July 1992 issue of Colonial Newsletter, in which Michael Hodder tried to piece out the emission sequence of the various D reverse combinations, speculating that some 1785 die marriages were struck after some of the 1786 ones.