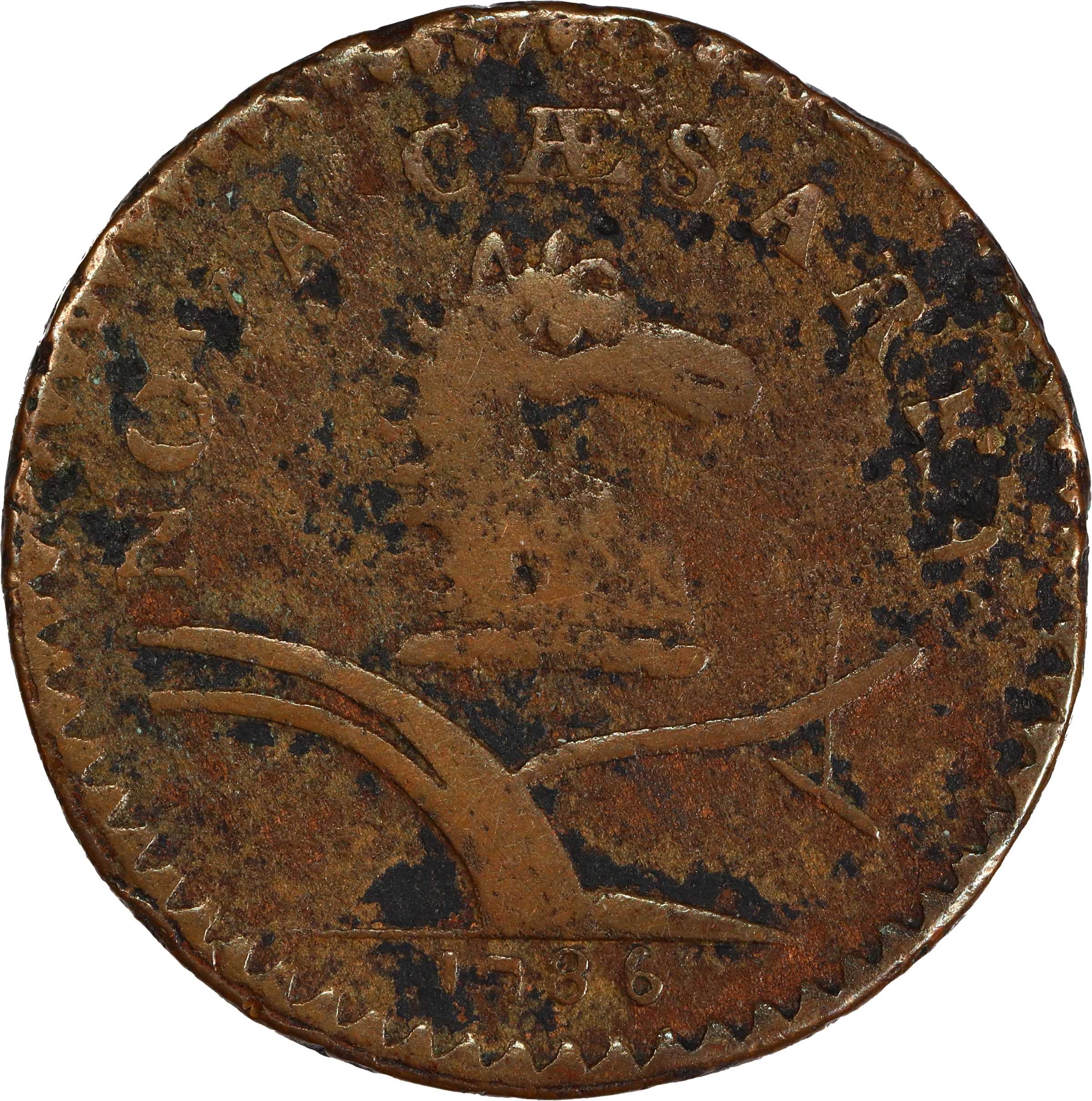 1786 New Jersey Copper. Maris 10-G, W-4740. Rarity-6. No Coulter. Fine Details--Environmental Damage (PCGS). 126.1 grains. 28.3 mm. Medal turn. Acquired by Syd shortly after its initial discovery and attribution, this is one of just six examples of this variety sold at auction since our 2003 Ford sale. The best of them was in our November 2019 E Pluribus Unum Collection sale, a PCGS VF-30 that seemed like a good deal at $12,600. Since this piece sold for $7,475 in 2005, every other example has brought between that sum and $11,500, an oddly narrow range for a wide variety of qualities and times! Back in 2005, we described this piece as:<p><p>"Medal Turn. Fine. On the obverse, the devices and legends are well defined, their light tan color standing out against fields that are a deeper clay brown in tone and are uniformly porous. There are also areas of darker ebony-brown as well as some pits around EA of CAESAREA. The reverse is a deep ruddy brown and is evenly granular over its surface. Legends are bold but for the US of PLURIBUS, and the shield is fully outlined, with some horizontal lines plainly visible in the shield. Many tiny knocks and scratches are noted around the edge, but they do not intrude upon any of the legends or devices. Relatively pleasing overall, especially the bold, all important obverse. Stacks offered both of the previous specimens of Maris 10-G to come up for auction, the ODonnell and Ford coins; we are now pleased to offer this newly discovered example of a key New Jersey copper type and variety for your consideration."<p><p>The Siboni-Howes-Ish census ranges from the Ford coin (AU+) down to a couple of VFs. Two of those coins are impounded at NJHS and ANS. Compared to other examples from these dies that miss the bottom of the Condition Census, this example has reasonably good aesthetic appeal and a wealth of detail. Its also genuine, unlike the fascinating (and probably unique) circulating cast counterfeit of a Maris 10-G that was offered as lot 224 in the Dr. Gordon Shaw Collection.<p> PCGS# 767867. From the Sydney F. Martin Collection. Earlier from our (Stacks) sale of September 2005, lot 277.