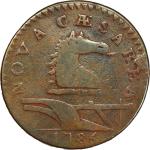 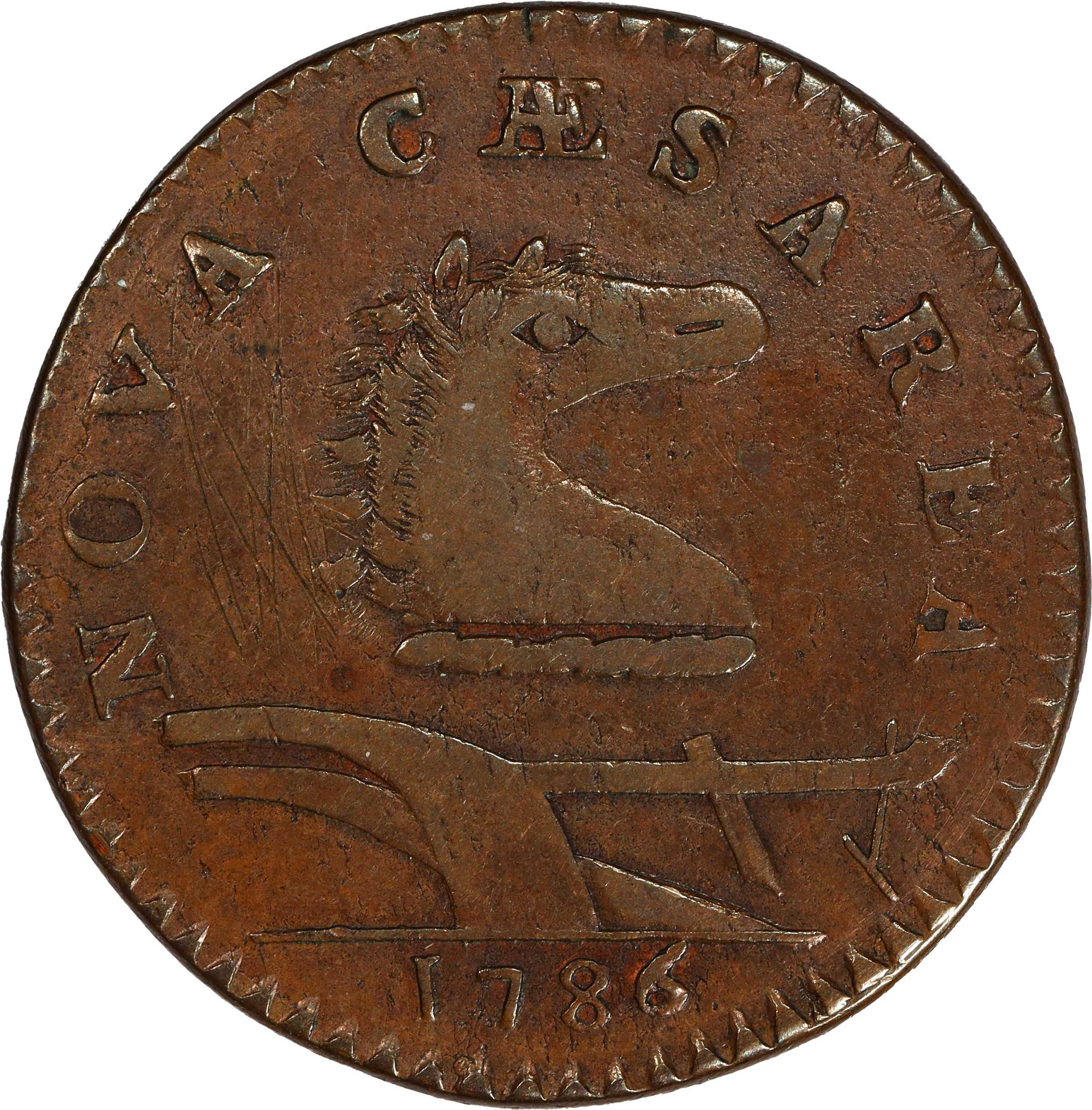 1786 New Jersey Copper. Maris 13-J, W-4800. Rarity-6-. Straight Plow Beam, Broken Unicorn. VF Details--Graffiti (PCGS). 150.9 grains. 28.2 mm. A Condition Census level example of this elusive Maris number with an extensive provenance to the 1918 Miller sale. Attractive medium brown with some contrasting gold on devices. A notable batch of vertical scratches is seen in the left obverse field, and another criss-cross batch is visible at the lower right of the shield. The centering is nearly ideal on both sides, and the sharpness is superb. The surfaces are mostly hard and appealing, with only a scattering of trivial short fissures. Die State II, with the obverses horizontal buckling underway.<p><p><p>This is ranked as the fourth finest example in the Siboni-Howes-Ish census, largely on the basis of its superb sharpness. Two AUs and an EF+ are ranked higher, three VFs are ranked lower, including the piece in the New Jersey Historical Society.<p><p><p>The rarity of this variety is easy to overlook based upon the prolific nature of the J reverse, but specialists know just how challenging it is, especially in decent grade. In our November 2019 E Pluribus Unum sale, a pleasing and problem free VF-25 (PCGS) was perhaps one of the surprises of the sale at $20,400, but savvy observers of the series will have noted that we hadnt sold a decent example of this Maris number since the 2010 Americana sale, when the Schettino coin brought $3,450. The exceptional Maris-Garrett-Partrick AU brought $40,800 in March 2021.<p><p><p>Ford owned two examples of Maris 13-J and preferred this one; he spun off his duplicate (ranked seventh in the SHI census) in the 1991 Frontenac sale, and its been in the same collection ever since. Siboni, Howes, and Ish counted 20 survivors from these dies in all grades, a more substantial number than Hodder (12), Breen (9), or Maris (4) knew about. Despite the discovery of some low grade pieces, the EPU coin is the only new discovery from the last couple decades that might threaten the Condition Census. This ones been ranked on that list for a solid century. PCGS# 767873. From the Sydney F. Martin Collection. Earlier ex William Hesslein, January 1918; Hillyer Ryder; F.C.C. Boyd Collection; Boyd Estate to John J. Ford, Jr.; our (Stacks) sale of the John J. Ford, Jr. Collection, Part I, October 2003, lot 86; Lawrence R. Stack Collection, November 2006.