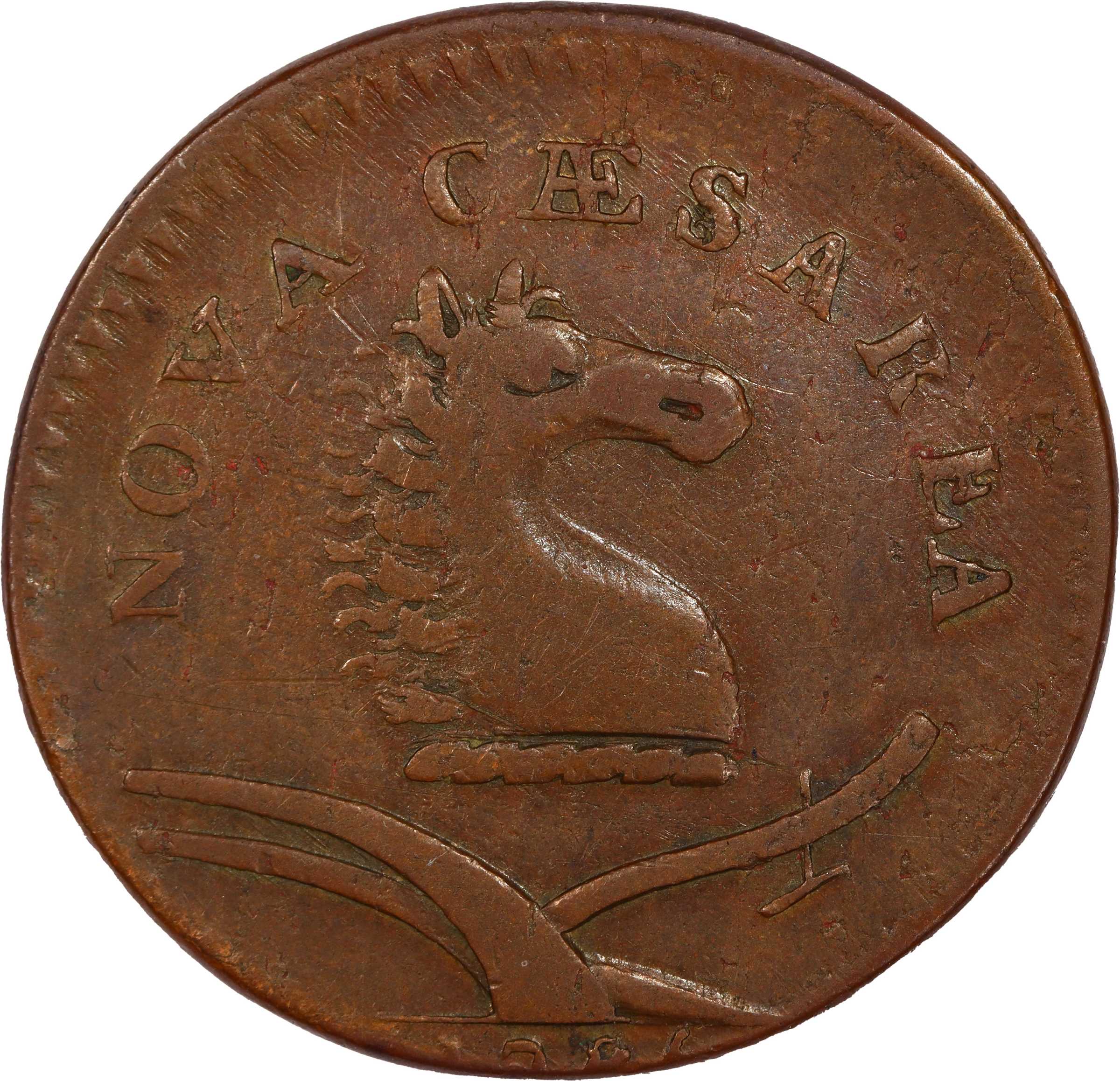 1786 New Jersey Copper. Maris 9-G, W-4737. Rarity-7. No Coulter, Shaggy Dog. VF-30 (PCGS). 129.4 grains. 29.3 mm. Reverse oriented 40 degrees clockwise of medal turn. The second finest known example of one of the classic rarities in the Maris sequence, a solid Rarity-7 with just seven examples known. This was the sixth discovered, the first in several decades, pried loose from a flea market vendor by Steve Tanenbaum for a princely $5000 in 1993. It is surpassed by only the Taylor coin, now in the Anton Collection, last sold in 1987.<p><p>This example boasts bold sharpness, with a high relief horsehead standing out from glossy chocolate brown fields. Some old scratches blend harmlessly into the background, including a vertical scrape from the serif of S in CAESAREA to the snout and some thinner pinscratches below and behind the central motif. On the reverse, a scratch near the center of the shield contrasts with far subtler pinscratches below it. Some planchet fissures are present, most notable at OV of NOVA, at the upper right obverse periphery, and adjacent to the shield at upper left and center right. The obverse is aligned to 6:00, with the die edge visible at 12:00 and the top half of all four date digits seen at 6:00. The reverse is more ideally centered, with a full complement of denticles and an unstruck area beyond the die periphery between 7:00 and 10:00. The obverse is a nice even dark brown, glossy and lovely in appearance, the reverse is closer to maroon, with a finely granular and somewhat matte surface still showing some pleasing gloss. Since its 2012 appearance, this coin has been deftly and professionally retoned, restoring immense eye appeal and measurably improving the coins desirability.<p><p>Six of the seven known specimens of this die marriage are in private hands, with the Canfield coin at the NJHS the lone exception. Since our 2001 ODonnell sale, three coins have changed hands at auction: this one in 2012, the low grade 2011 eBay discovery that has not resold since, and the ex Maris discovery coin, which brought $66,000 graded Fine Details (PCGS) in our 2019 E Pluribus Unum sale. That piece, ranked fourth finest in the census, is not quite as sharp as this one, nor perhaps quite as appealing.<p> PCGS# 755999. From the Sydney F. Martin Collection. Earlier from an outdoor flea market in March 1993 via R. Mogren; Steve Tanenbaum Collection; our Americana sale of January 2012, lot 7503. Plated in the <em>Whitman Encyclopedia of Colonial and Early American Coins</em>, p. 162.