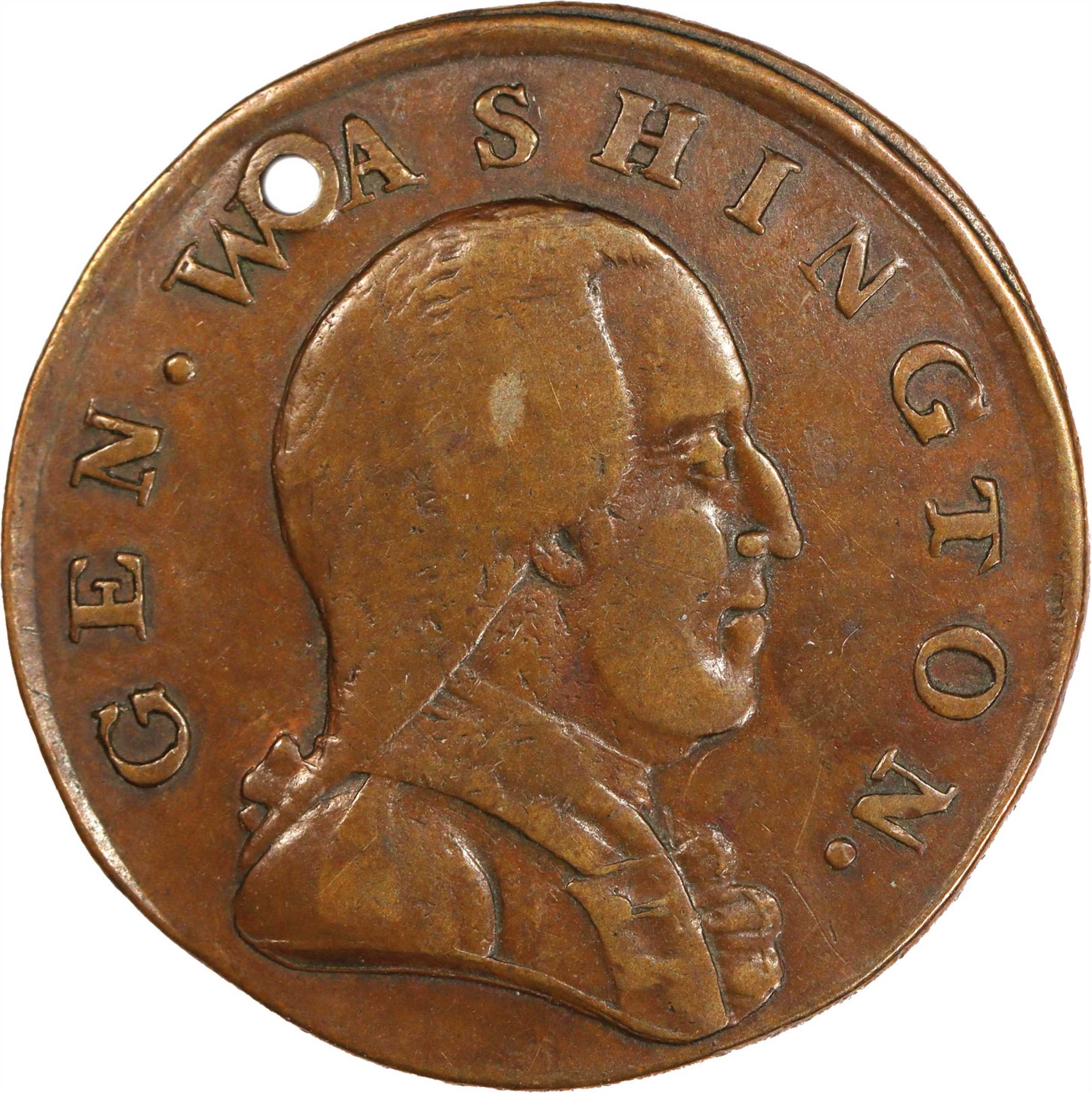 (1786) New Jersey General Washington Copper. Maris 4-C, W-5655, Musante GW-04. Rarity-8-. EF Details--Holed (PCGS). 130.7 grains. 29.1 mm. A perfect coin with a hole in it. Smooth, glossy, and beautiful, with ideal medium brown color and hard surfaces. Spectacularly appealing and attractive, with the single flaw of a neat, round hole between the WA of WASHINGTON, perfectly placed atop the reverse, just above the point of the shield between BU of PLURIBUS. If this was intended to wear and display the Federal shield, it served its time gently, as neither side shows any marks or scratches of any consequence. The central shield shows marks that predate striking, just the inherent texture of the planchet, and only a few other trivial marks are seen. An old, minor scratch under UN of UNUM is the most notable of them, and it isnt notable at all. <p><p>The obverse is aligned just left of 6:00, allowing the relief of the raised rim to show in bold contrast from the area outside the die edge between 12:00 and 2:00. The die rotation is about 30 degrees clockwise of medal turn. The reverse is pretty well centered, shifted trivially to 3:00, with the raised rim outside the wedge-shaped denticles visible at left and no denticles visible at 3:00. The strike is solid, and the remaining details are more extensive than what is seen on the Garrett-Partrick coin.<p><p>There are only three of these. The only perfect one is the exceptional Boyd-Ford coin. The Partrick example, which brought $156,000 in March 2021 as an NGC VF-25, has some rim issues to go with its superlative provenance: Crosby, Maris plate, Parmelee, Garrett, etc. This one has the beautiful surface of the Ford coin and an enviable provenance. All things considered, the hole is forgivable (and, fortunately, if it must be there, at least its neat and round).<p><p>This is a legendary New Jersey variety, one of the rarest and certainly one of the most distinctive. It offers a bridge to the Confederatios, the kind of technical die marriage data that serious students of numismatics cherish. But to appreciate this coin fully, it needs to be understood beyond the realm of technical numismatics, beyond the confines of the New Jersey copper series. <p><p>The Maris 4-C Washington Bust copper is the earliest American medallic portrait of George Washington. It is at least four years earlier than the 1790 Manly medal. Its three years earlier than the Washington Before Boston medal. The 1778 Voltaire medal, struck in England or perhaps France, precedes it, but with a fictional portrait that serves only as a stand-in to recognize Washington the concept rather than Washington the man. Only the 1786-dated Non Vi Virtute Vici coppers rival this one, though the marriage of this die to a 1785-dated Confederatio reverse necessarily offers this type an edge in terms of temporal primacy. Compared on the basics of aesthetics alone, this is clearly the preeminent American medallic portrait of Washington from the pre-1790 era, not only the first.<p><p>This was the second example discovered. The first, plated in Maris and owned by Sylvester S. Crosby, was "discovered by me in a lot of trash some ten years ago," according to John Haseltine in the 1883 Crosby sale. This one first appeared at auction in the 1914 Parsons sale, at which time it was considered unique in public hands (the other known example was "permanently impounded," as the phrase goes, in the Robert Garrett Collection at Princeton University).<p> PCGS# 902516. From the Sydney F. Martin Collection. Earlier from Henry Chapmans sale of the Hon. George M. Parsons Collection, June 1914, lot 221; Virgil Brand Collection; Dr. George Fuld Collection; our (Stacks) sale of the John L. Roper, 2nd. Collection, December 1983, lot 298; our (Stacks) sale of the Gilbert Steinberg Collection, October 1989, lot 72; Anthony Terranova; our (Stacks) sale of May 1993, lot 49; Lawrence R. Stack Collection, November 2006. Plated in <em>The American Numismatic Society Exhibition of United States and Colonials Coins, January Seventeenth to February Eighteenth 1914</em>, p. 133 and Plate 39.