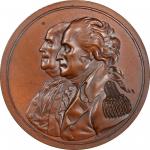 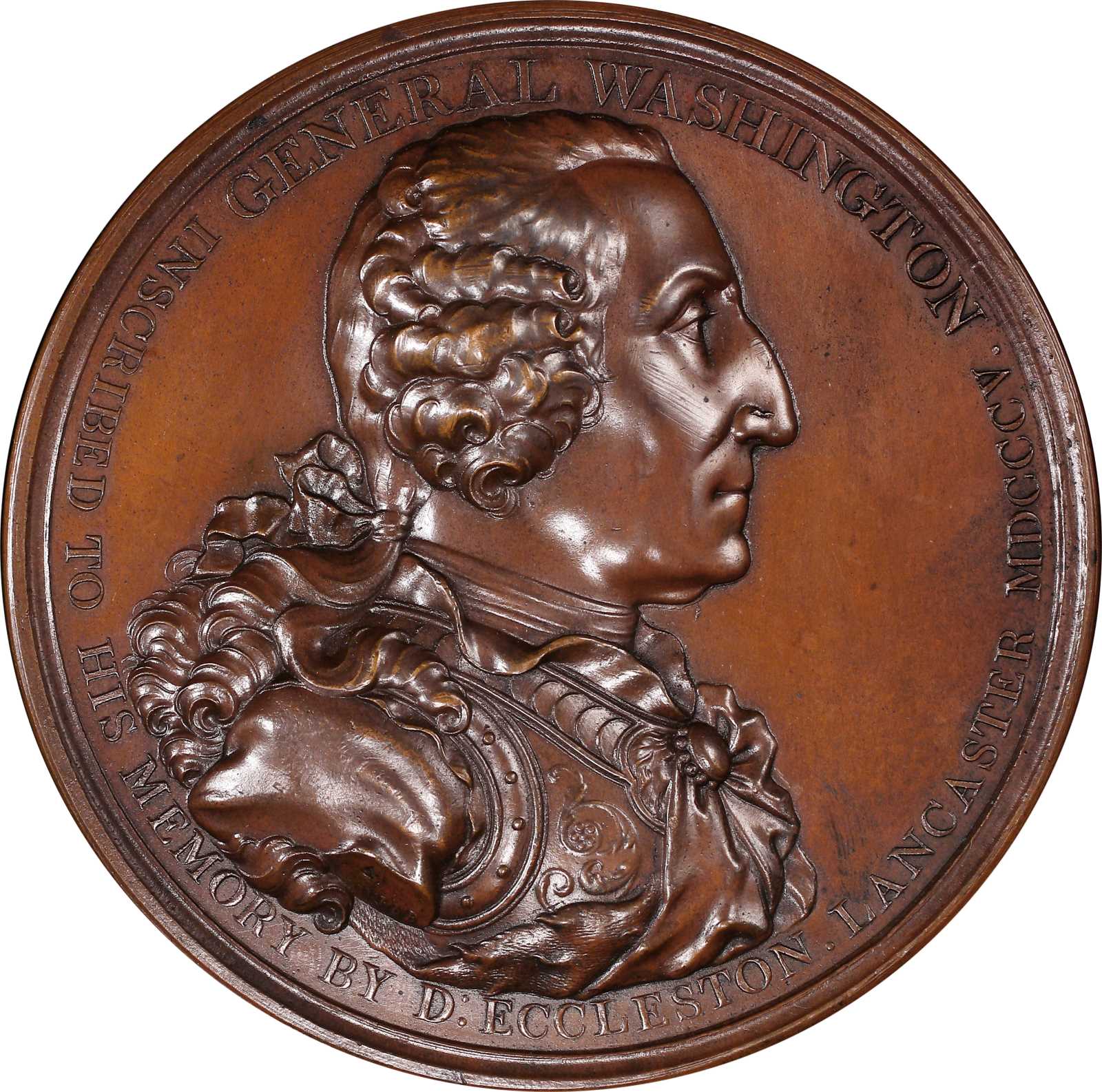 1805 Eccleston medal. With Eccleston’s secret marks. Musante GW-88, Baker-85. Copper, Bronzed. SP-64 (PCGS).76.0 mm. 2332.5 grains. Another very handsome example of this impressive medal. Lovely deep chestnut brown surfaces verge on mahogany. Glossy throughout with light reflectivity in the fields. Just a trace of patina loss on the highest points of the obverse, where the highest hair curls have taken on a light olive tone. Well struck on a nice planchet with only minor porosity from the cast flan seen in the tighter recesses.<p><p>This medal has three hidden marks, each punched into the metal post-striking as some type of identifier. They are from three different small individual punches as follows:<p><p>Obverse. A tiny triangular punch in the truncation next to the engravers name, WEBB.<p><p>Reverse. A small circular punch within the space formed between the Indians body and (viewers) right arm.<p><p>Reverse. A small square punch beneath the exergual line of the central medallion.<p><p>Due to the generally rough nature of many Eccleston medal surfaces, showing various casting pits left from the production of the planchets, the secret marks are easy to overlook or misinterpret on any lone specimen. To the best of our knowledge, these have never before been published. They were discovered around 2016 by our Vice President of Numismatics, Vicken Yegparian, when he had the opportunity to view a small group of Eccleston medals at the same time. He noticed the marks, and realized that two different specimens shared them. They are the same on all examples seen, and are unmistakable in their deliberate and precisely applied nature. He called them to the attention of the writer, whose own specimen has them, and we have now confirmed them on four or five specimens in bronze, as follows:<p><p>1.Private New York collection<p>2.The writers specimen, ex Q. David Bowers<p>3.Heritage, January 2014, lot 3207<p>4.The present specimen<p>5.Gilbert Steinberg (Stacks, May 1992, lot 52). This medal was unplated and could be any of the first three above. We know it was a marked one as the description mentions a "triangular dig over designers name."<p><p>We are aware of five fire-gilt Eccleston medals and, interestingly, they all bear these secret marks:<p><p>1.Thomas Jeffersons personal specimen<p>2.Private New York collection<p>3.Heritage, April 2019, lot 8736<p>4.Lucien LaRiviere specimen, now at Colonial Williamsburg<p>5.European Specimen (recently discovered). "IVAN" on edge.<p><p>All of the bronzes have the same distinctive bronzed finish, and are of the later die state, while the fire-gilt pieces are both early and late-state impressions. These are distinguished by the presence or lack of a lump break to the right of the base of the Indians bow.<p><p>These "marked" specimens must have an interesting story, and we have deciphered one important part. From the fact that there are multiple examples with both bronzed and fire-gilt finishes, it is easy to deduce that that these are not collectors marks. So, whose marks are they?<p><p>While working on this collection, we came to the conclusion that these marks were applied very early, their source being either the maker or related to a point of distribution. The keystone discovery is that Thomas Jeffersons medal bears the marks. Jefferson was presented his medal directly by Daniel Eccleston, and that medal remains in the care of Monticello today. Additionally, we know that Eccleston sent three medals to Jefferson, the other two intended for Bushrod Washington and Justice John Marshall. It is virtually certain that all of these presentation specimens would have been fire gilt, just as Jeffersons was, and as we have never seen a fire gilt example without the marks, this is further fairly conclusive evidence that Daniel Eccleston himself applied these marks. We do not know why he applied them, but it is fairly certain that all so-marked were intended as presentations directly by Eccleston.Ex William Spohn Baker Collection, to the Historical Society of Pennsylvania by bequest, November 15, 1897.