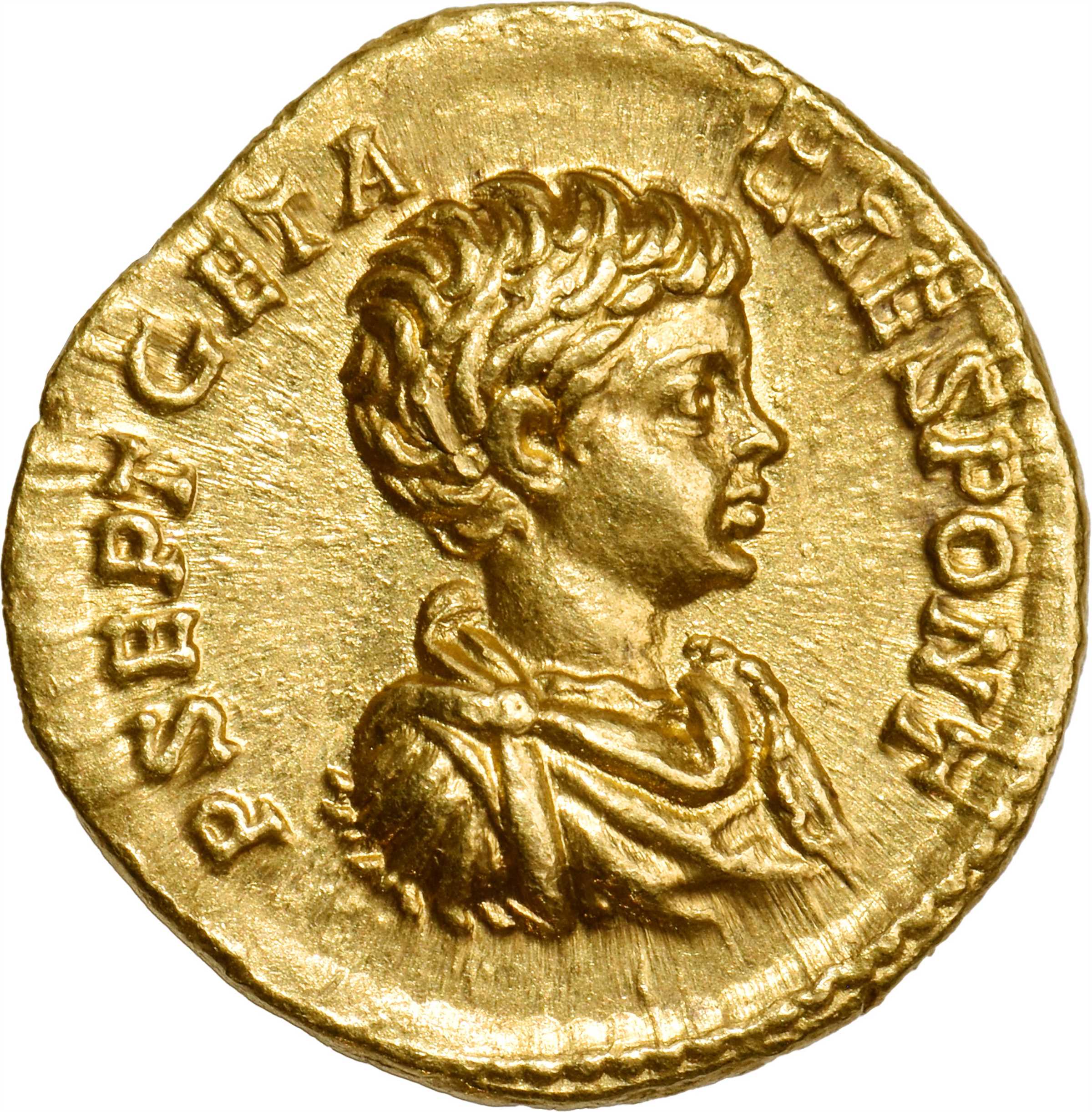 GETA AS CAESAR, WITH CARACALLA, A.D. 198-209. AV Aureus (7.26 gms), Rome Mint, A.D. 200-202. NGC Ch AU★, Strike: 5/5 Surface: 5/5. cf. RIC-21 (obv. bust seen from behind in plate); Calico-2930b (same obv. die as illustration; R5). Obverse: P SEPT GETA CAES PONT, bareheaded, draped, and cuirassed bust of Geta right, seen from the front; Reverse: SEVERI INVICTI AVG PII FIL, radiate and cuirassed half-length bust of Caracalla left, raising hand and wearing aegis on breastplate. For the collector who demands nothing but the best, this breathtaking, <strong>RARE</strong> dynastic Aureus undoubtedly impresses, as it presents a strike that verges upon being medallic in nature on each side. The busts of the two princes offer exceptional detail and are assuredly the product of skilled rendering. The younger Geta graces the obverse, still brimming with youthful charm, while the elder Caracalla demands attention on the reverse, his hand raised in salutation while donning a radiate crown and suited for the battlefield. Each side is endowed with captivating brilliance and a golden-orange hue that delights, with great centering also augmenting its appeal. The nearly-serene nature put forth by this choice specimen would not last, however, as an act of fratricide would see the younger killed under the command of the elder just a mere decade later--a blow to the emerging Severan dynasty. Compare to a similar example from the Huntington Collection, though not quite as transfixing, which realized a hammer of over $160,000 in October 2012, showing just how far an incredible piece such as this stunner can soar. From the Dr. Michael Rogers Collection, Part II.<p>Ex: Collection of a European Scholar lately Deceased (LHS 97 - 5/2006) Lot # 50.<p>Ex: de Guermantes Collection (Leu 86 - 5/2003) Lot # 913.<p>Ex: Karnak Hoard, 1901