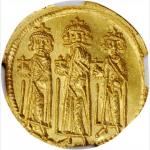 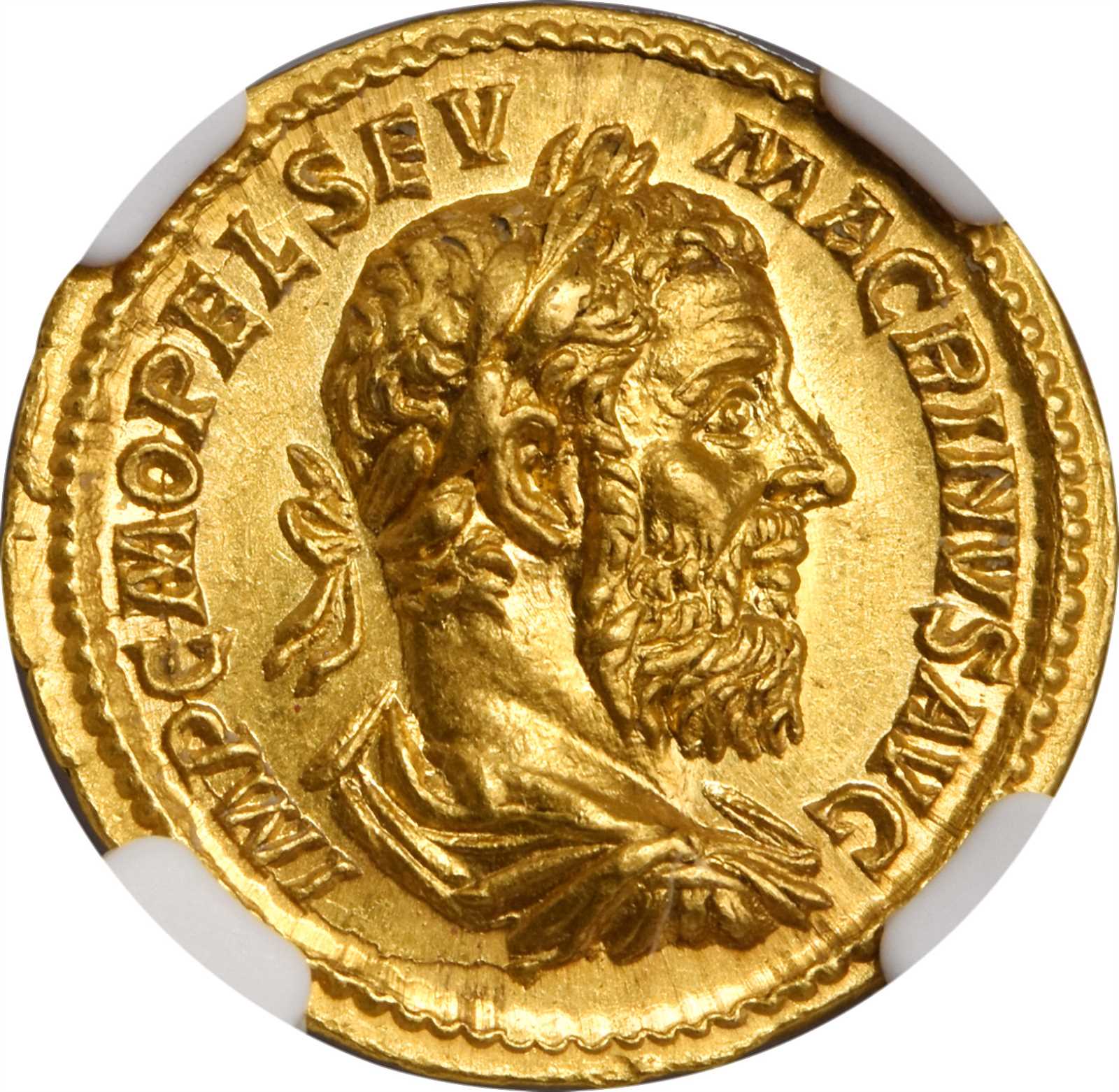 MACRINUS, A.D. 217-218. AV Aureus (7.17 gms), Rome Mint, A.D. 218. NGC Ch MS★, Strike: 5/5 Surface: 5/5. Fine Style. RIC-79; Calico-2947 corr. (Antioch). Obverse: IMP C M OPEL SEV MACRINVS AVG, laureate, draped, and cuirassed bust right; Reverse: LIBERALITAS AVG, Diadumenian, bareheaded and togate, and Macrinus, laureate and togate, seated left on curule chairs set upon platform, each extending their right hands to small figure climbing stairs holding out fold of toga to receive tessera; to left, Liberalitas standing left, holding abacus and cornucopia; behind to right, lictor standing behind imperial pair, holding fasces. A <strong>VERY RARE</strong> and highly desirable type, this Aureus features a reverse scene with father and son, Macrinus and Diadumenian, presenting a monetary distribution to the Roman populace--an act meant to generate enthusiasm and support for the emperor. With an exacting, razor-sharp strike that is so well centered that the beading of the borders on each side is wholly contained upon the flan, the eye appeal of this wondrous specimen is clearly off the charts. When combined with its tremendous surface quality, dazzling lustrous brilliance, and complete lack of handling or issues, it becomes easy to see that this is likely the finest example extant. The closest comparative piece [<em>ex Shoshanna and the Metropolitan Museum of Art</em>], of the same reverse die but clearly inferior and merely grading NGC Ch AU★, realized a total of $288,000 in August 2018, while the Millennia specimen, sold in May 2008 for a total of $106,375, does not offer nearly the same degree of centering or luster. Superlatively Mint State, flawlessly struck and preserved, and with dies of the finest style, this is undoubtedly a pinnacle of Roman coinage and assuredly destined for one of the most advanced ancient and/or gold cabinets. From the Dr. Michael Rogers Collection.<p>Ex: Muenzen & Medaillen Basel 93 (12/2003) Lot # 223.<p>Acquired from Spink & Son London, 1904.