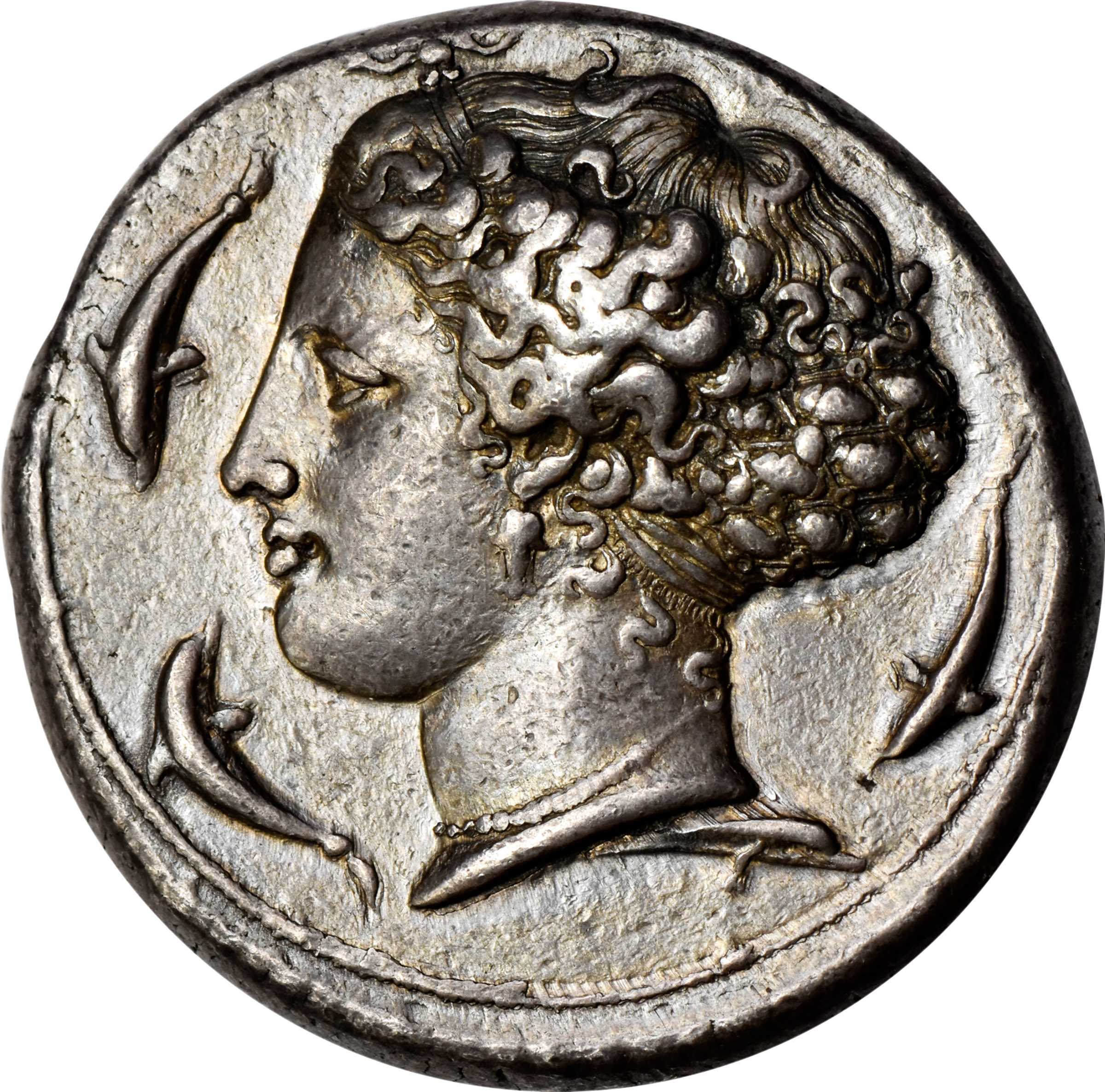 SICILY. Syracuse. Dionysios I, 406-367 B.C. AR Dekadrachm (43.38 gms), Obverse and Reverse dies signed by Kimon, ca. 405-400 B.C. NGC Ch VF★, Strike: 5/5 Surface: 5/5. Fine Style. HGC-2, 1298; Jongkees-1 (same dies); SNG Lloyd-1409 (same dies); BMC-200 (same dies). Obverse: Charioteer, holding kentron and reins, driving quadriga left; above, crowning Nike flying right; below heavy exergual line, military harness, shield, greaves, cuirass, and crested Attic helmet, all connected by a horizontal spear; [A&Theta;&Lambda;A below], KIM&Omega;N (only faintly visible in spots) on the surface of the exergual line, to the left; Reverse: Head of Arethousa left, wearing hair in banded net, earring, and pearl necklace; [&Sigma;&Upsilon;&Rho;&Alpha;&Kappa;&Omicron;&Sigma;&Iota;&Omega;&Nu; above], KI/M[I] in two lines on front of hairband.<p>A timeless classic in terms of elegance and artistry, the engraving of Kimon is always prized among advanced collectors of the ancient world, as it reveals more of a realistic nature to portraiture, as opposed to the somewhat more idealized representations of his contemporaries, such as Euainetos. Not often encountered so dazzling and alluring, especially when featuring Kimons signature, this incredible specimen should undoubtedly generate tremendous enthusiasm excitement. Increasing this intrigue even further is the fact that this appearance likely represents its first time at a public sale in over a century. Compare to a similar example of the same die pair, <em>though clearly of inferior metal quality</em>, that realized a total of nearly $470,000 in June 2021.<p><p>Saltons ticket and card file describes this majestic specimen as emanating from the collections of J. P. Morgan, Mable Morgan Satterley Ingalls (Morgans graddaughter), and Dr. Herbert E. Ives. The elder Morgan did own another Kimon specimen of this die pairing (listed as # 160 in Wayte Raymonds catalog and specified as originally from the Sambon Collection [there as # 358]), but that example is not the present piece, meaning that it is quite possible that he presented the current specimen here to his granddaughter Mable, who would have been a child then (Morgan passed away in 1913, Mable was born in 1901). Since she is not otherwise known to have been a coin collector, this might have been a gift-<em>and a rather extravagant one at that</em>. Given Morgans immense wealth, however, a token of affection of this stature from grandfather to granddaughter would not be surprising. It is highly likely that Mark Salton had been told this fact by Herbert Ives, who was well known to Salton in his role as President of the American Numismatic Society. As such, this would explain its absence from Jongkees 1941 study on the Dekadrachms of Kimon. From the Mark and Lottie Salton Collection.