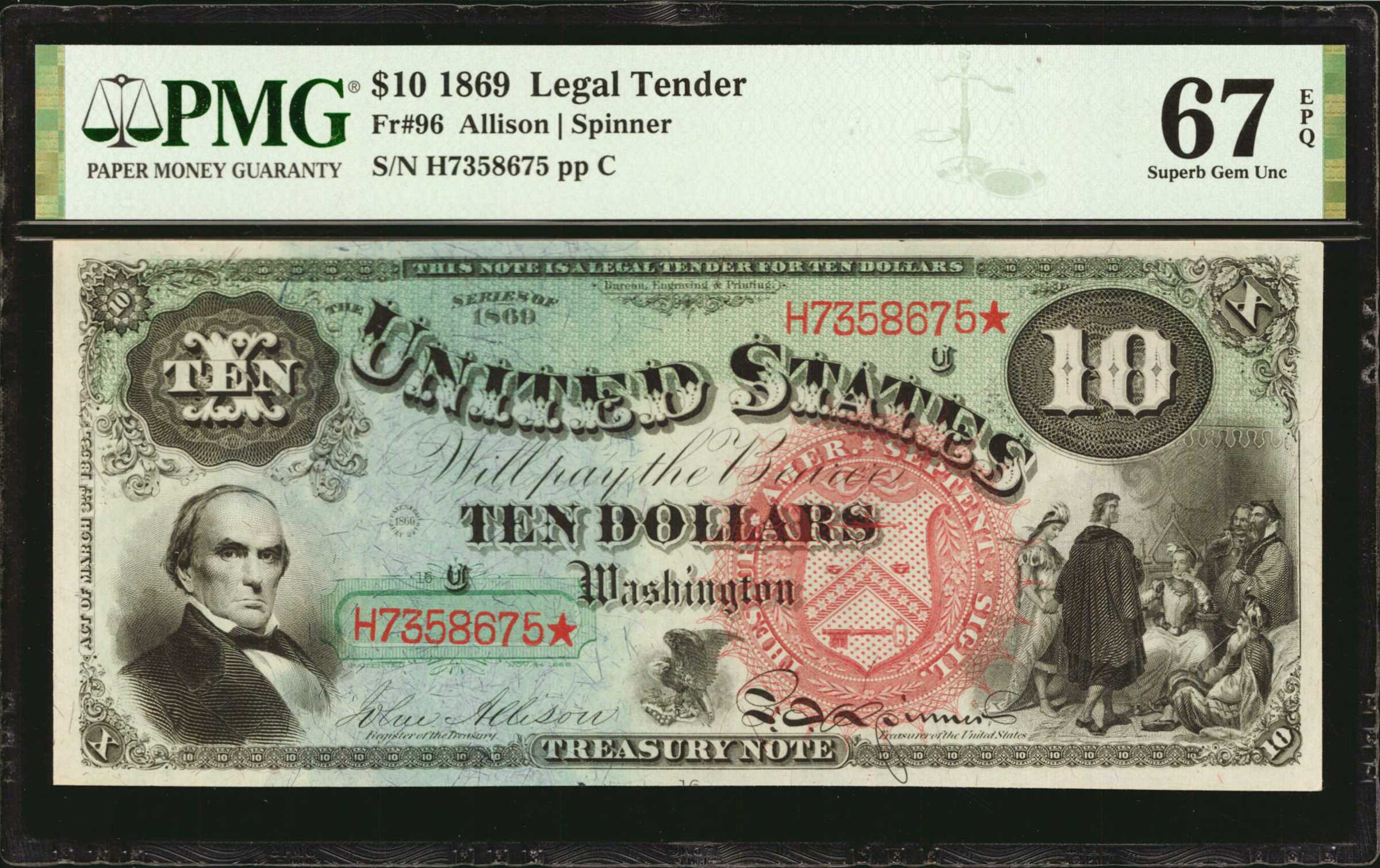 Fr. 96. 1869 $10 Legal Tender Note. PMG Superb Gem Uncirculated 67 EPQ. Here is a stunning example of this colorful and popular design type. These 1869 Legal Tender Notes are commonly referred to as "Rainbow" notes due to the presence of green and red overprints inks that when combined with the blue tinted security paper provide a colorful appearance. The crisp broadly margined example here certainly supports the nickname as the rich hues of green, red and blue are impressive. The engraved design elements are boldly inked and strikingly detailed. Just three examples have been encapsulated by PMG at this lofty grading tier, with none graded finer.<p>Each denomination from the Series of 1869 is represented by just a single catalog number, Fr. 69 for the $10 denomination. The portrait of Daniel Webster, engraved by Alfred Sealey, is at left, while at right is the vignette titled Introduction of the Old World to the New, or Pocahontas Presented at Court. At bottom center is an eagle perched upon a shield and clutching an olive branch and arrows. When inverted the eagle resembles a donkey lending to the popular "Jackass" nickname by which these notes are commonly known. The same design was used on the top of Fractional Currency Shields. This particular rendition of the national bird was continued on Legal Tender Notes through and including the Series of 1880. The signers for this series are John Allison as register of the Treasury and F.(rancis) E. Spinner as treasurer of the United States.<p><p>This type comes on blue tinted security paper based on Wilcoxs 1866 patent. A large red spiked Treasury Seal is to the right of center. A green protector tint is seen across the top of the note. The tint is made up of microlettered TENs in a repeating pattern. A green serial number panel is to the right of Websters portrait. Red printed serial numbers are to the lower left and upper right. Engraved signatures of Allison and Spinner are seen along the bottom border of the design. The back is intricately laid out in a green geometric design with TEN at left and 10 at right. The Legal Tender clause and anti-counterfeiting language is at center. The imprint of the National Bank Note Company is at bottom center.<p>There were 8,376,000 $10 Rainbow notes printed. Today fewer than 1,000 are believed to survive, most of which show significant circulation. This example is a significant offering to the collecting community, and an opportunity that should not be passed up for those looking to upgrade or acquire this elite-tier Superb Gem. PMG Pop 3/None Finer.<p><p>