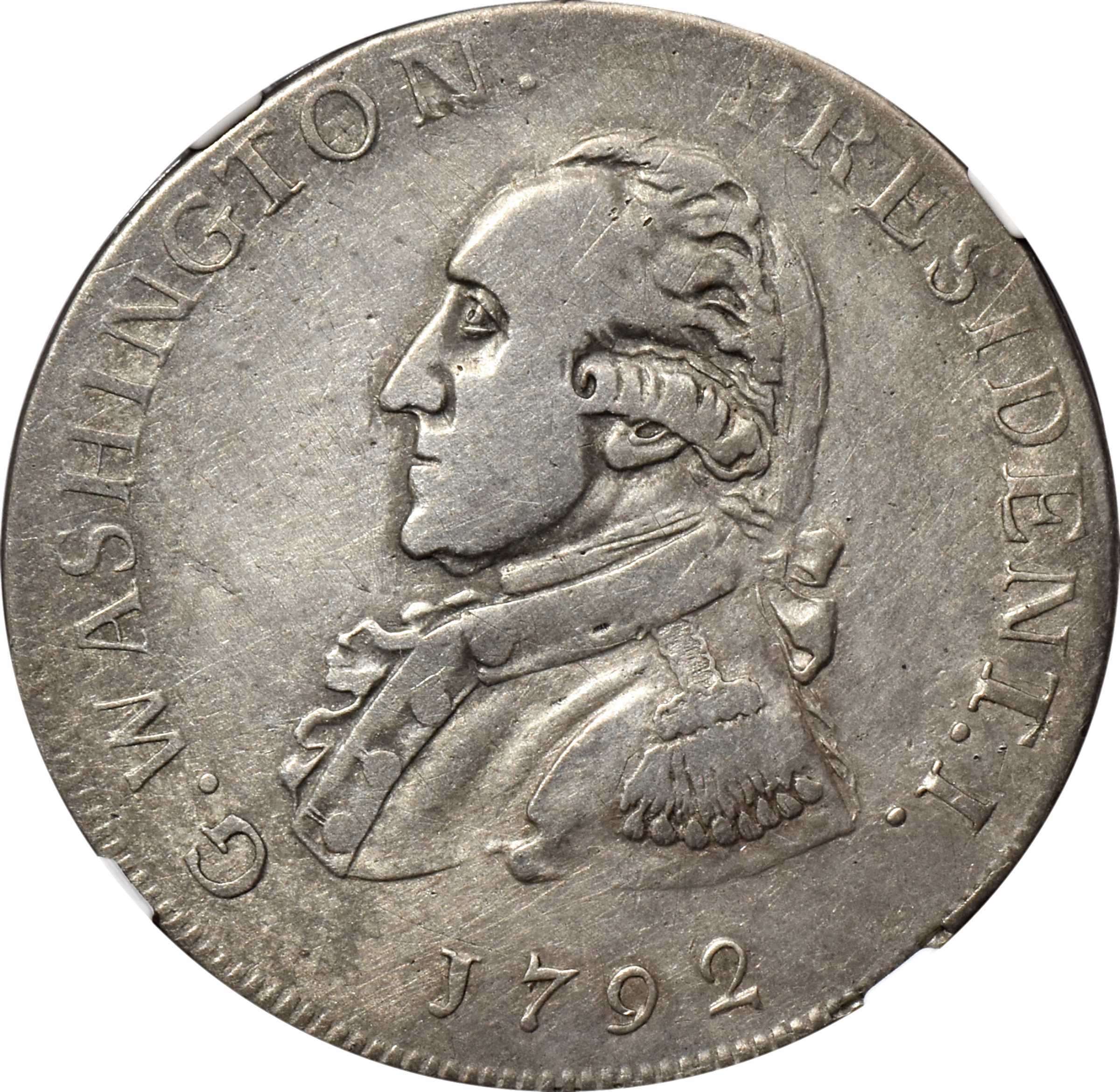 1792 Washington Getz Pattern. Small Eagle. Musante GW-22A, Baker-24, W-10780. Rarity-7. Silver. Narrow Planchet. Plain Edge. VF Details--Obverse Repaired (NGC). 232.6 grains. A fabled rarity among Washington portrait pieces, offered here as a desirable silver striking. This is a boldly defined example with all major features fully appreciable, sharper detail confined to the more recessed areas of the design elements. Accuracy does compel us to mention some softness at the obverse border, where the top of several letters in the words WASHINGTON and PRESIDENT are a trifle faint. On the other hand, some denticulation is evident along the lower border on this side, a particularly significant feature given the narrow planchet stock. Silver-gray obverse toning gives way to slightly bolder pewter gray on the reverse. While the in hand appearance is quite smooth, close inspection with a loupe reveals considerable hairlining on the obverse, especially in the left field where there is evidence of tooling to explain the NGC qualifier. In fact, the date JUNE 1806 and some other lettering had been applied to the obverse field of this piece a long time ago. It is not random graffiti, however, but rather an old collectors mark that a later, perhaps misguided owner felt compelled to efface. Still an aesthetically pleasing piece, and a more than respectable example of this significant rarity in the wider Washingtoniana series.<p>In April 1792, the Congress sent off a Mint Act for President Washingtons signature. It was essentially the House version of the bill, insisting that American coins depict "an impression emblematic of Liberty." The Senate version of the bill, which never saw the presidents desk, was much different, and Washingtons opposition to the concepts therein may have helped kill it. By the terms of the Senate version, United States coins would have depicted:<p><em>"An impression or representation of the head of the President of the United States for the time being, with an inscription which shall express the initial or first letter of his Christian or first name, and his surname at length, the succession of the presidency numerically, and the year of the coinage; and upon the reverse of each of the gold and silver coins, there shall be the figure or representation of an eagle, with this inscription - United States of America."</em><p><em></em>If that design prescription sounds familiar, it is because it is precisely what appears on the Getz patterns, down to the I representing "the succession of the presidency numerically" that follows G. WASHINGTON PRESIDENT.<p>It appears Getzs dream of work with the United States Mint did not cease when the coinage acts language made his patterns obsolete. These dies may have been put back into use early in 1793, producing small planchet pieces whose weight intended to meet the standard for the new cent coinage. One specimen, in the Lasser Collection at Colonial Williamsburg, is overstruck on a 1794 cent. This portrait punch also created new dies: the 1796-dated die used on the unique silver "Drumheller Dollar," which also used this exact reverse die; as well as the 1797 Getz Washington Masonic medal. These dies look to have made their way into the hands of Philadelphia mechanic John Harper, whose August 1797 estate listing cites "2 Dies of General Washington Heads, 1 [ditto] of the face Masons coat of arms." The nature of Getzs relationship to Harper has yet to be uncovered.<p>Ultimately Getz struck both silver and copper examples from his dies. This present silver striking is listed as specimen 13 in George Fulds <em>The Washington Pattern Coinage of Peter Getz</em> (2009). The author counted a total of just 22 specimens of the 1792 Getz pattern in silver, which includes both narrow and wide flan pieces. Clearly this is rare type, and the present example is sure to see significant bidding among specialists. Ex George M. Kline; W. Elliott Woodwards sale of the "Vicksburg Collection" (Kline), May 1988, lot 1165; B. Max Mehls sale of the James Ten Eyck Collection, May 1922, lot 838; John J. Ford, Jr.; F.S. Werner; Donald G. Partrick; Heritages CSNS Signature Auction of April 2021, lot 3041. Paper envelope with provenance and other collector notes included.