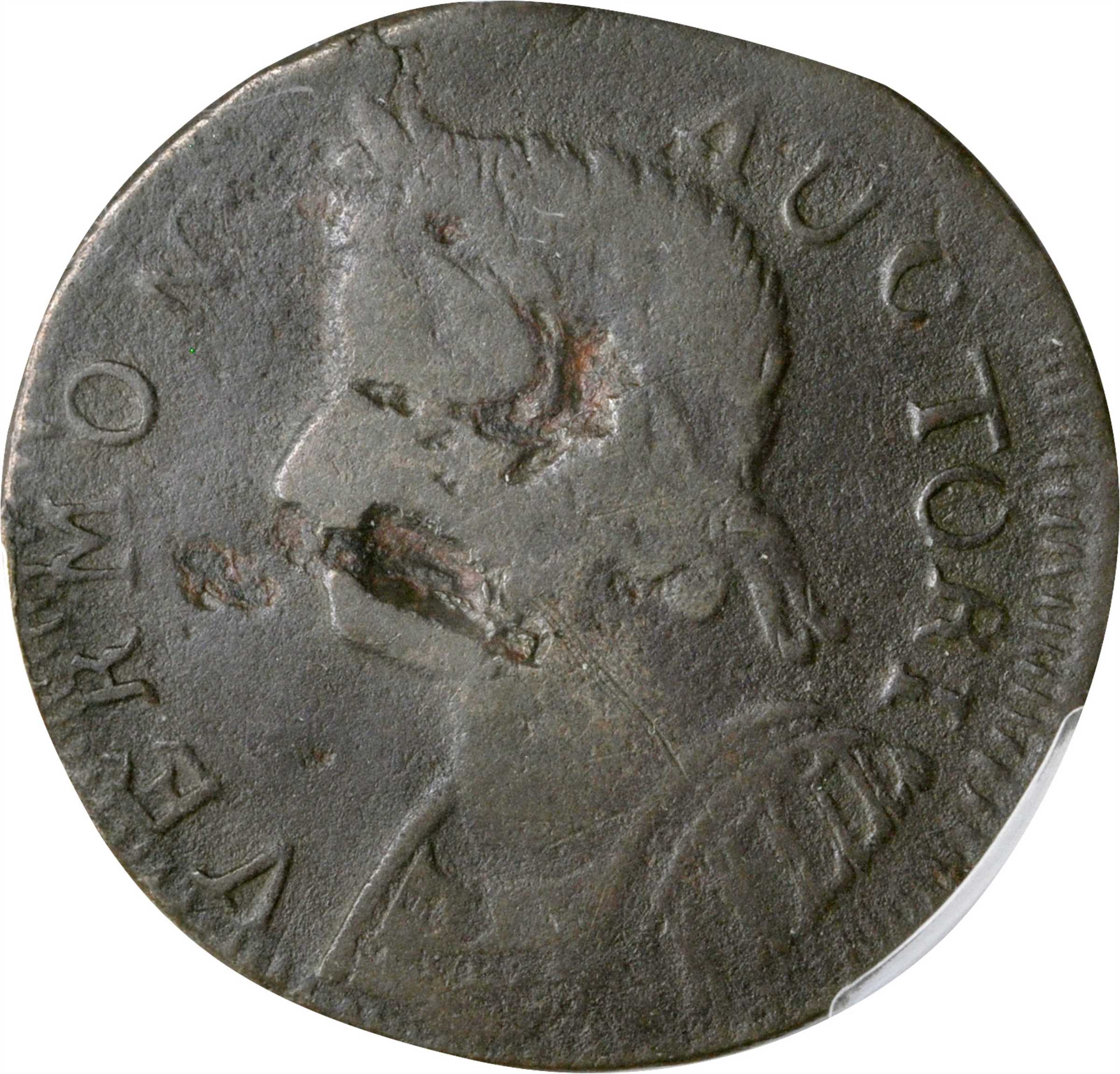 1787 Vermont Copper. RR-15, Bressett 9-I, W-2060. Rarity-6. Bust Left. VF-20 (PCGS). 105.9 grains. Here is an exceptional example of an eagerly sought Vermont copper variety that is elusive in all grades. Dark gray-brown surfaces are uncommonly smooth for an RR-15. Deep planchet flaws on both sides are noted, and are as made, while accuracy alone compels mention of microscopic roughness. The obverse die state is perfect, the reverse with a heavy cud break at the lower border that obscures much of the date. The strike is off center to the viewers left on both sides, although only the border denticulation is affected. With plenty of bold detail to the major design elements, this is certainly a superior quality RR-15 with legitimate claim to Condition Census.<p>This iconic variety is the only 1787-dated Vermont copper of the Bust Left style and, as such, it constitutes a distinct <em>Guide Book</em> type that is in great demand. These were almost certainly among the last Vermont coppers struck at Harmons mint in Rupert before coinage was largely transferred to Machins Mills in New York. The obverse die was first used in the RR-11 pairing, a 1786-dated variety. The coiners probably introduced the reverse of RR-15 when the calendar advanced to 1787, although it developed a massive cud break at the lower border that for all intents and purposes obliterated the date, leaving only the top loop of the 8 and the crossbar of the 7, as seen on the present example. After a very small press run, the Harmon crew accepted the unsuitability of the RR-15 reverse die for continued coinage and pressed the 1786-dated reverse back into use to strike additional examples of RR-11 in a remarriage. Carlotto (1993) argues that the short-lived reverse die of RR-15 is an unused 1786-dated die overdated to 1787, and he publishes a close-up photo that appears to make his case. He further argues that the act of overdating created a weakness in the date area of the die that resulted in the massive cud break during striking. Bowers (2018) supports the overdating theory and actually lists this variety as 1787/6.<p>At the time of our (Stacks) Ford I Sale, where a superior quality VF realized more than $27,000 as lot 40, Michael Hodder knew of just 19 examples of RR-15 in all grades. He was aware of four coins that were positively finer than the Ford specimen: Bennington Museum, William Anton, Richard August, and a recently discovered (as of 2003) EF. Approximately 20 to 25 examples are known today, although Bowers (2018) provides a liberal estimate of 17 to 32 coins extant, the upper threshold to account for new discoveries. The present example is comparable to the aforementioned Ford I:40, which is less extensively flawed, although also microgranular. It also compares well with the Bowers specimen, certified PCGS VF-20, which realized $20,400 in our June 2020 Auction. Yet another comparable piece is the conservatively graded PCGS Fine-15 -- seemingly unlisted in the earlier Hodder census of 19 examples -- that realized $41,400 as lot 6920 in Heritages January 2005 FUN Signature Sale. This variety was absent from Cole, Norweb, Oechsner, Hinkley and a host of other Vermont cabinets. Among the remaining survivors that have been traced, low grades, dark surfaces and flawed planchets are the norm; at least two have holes in them (as made) due to the excessively poor planchet quality.<p>While a few more examples of RR-15 have come to light since Hodder updated Roy Bonjours census for our Ford I Sale in 2003, there has been little effect on this varietys overall rarity, or its rarity in high grades. We expect that this superior quality VF will see some of the most spirited bidding for any lot in this sale. Ex Lyman H. Lows sale of the Henry Phelps Collection, March 1908, lot 22; Hillyer C. Ryder; F.C.C. Boyd; our (Bowers and Merenas) Frontenac Sale, November 1991, lot 95. Collector envelope with attribution and provenance notes included.