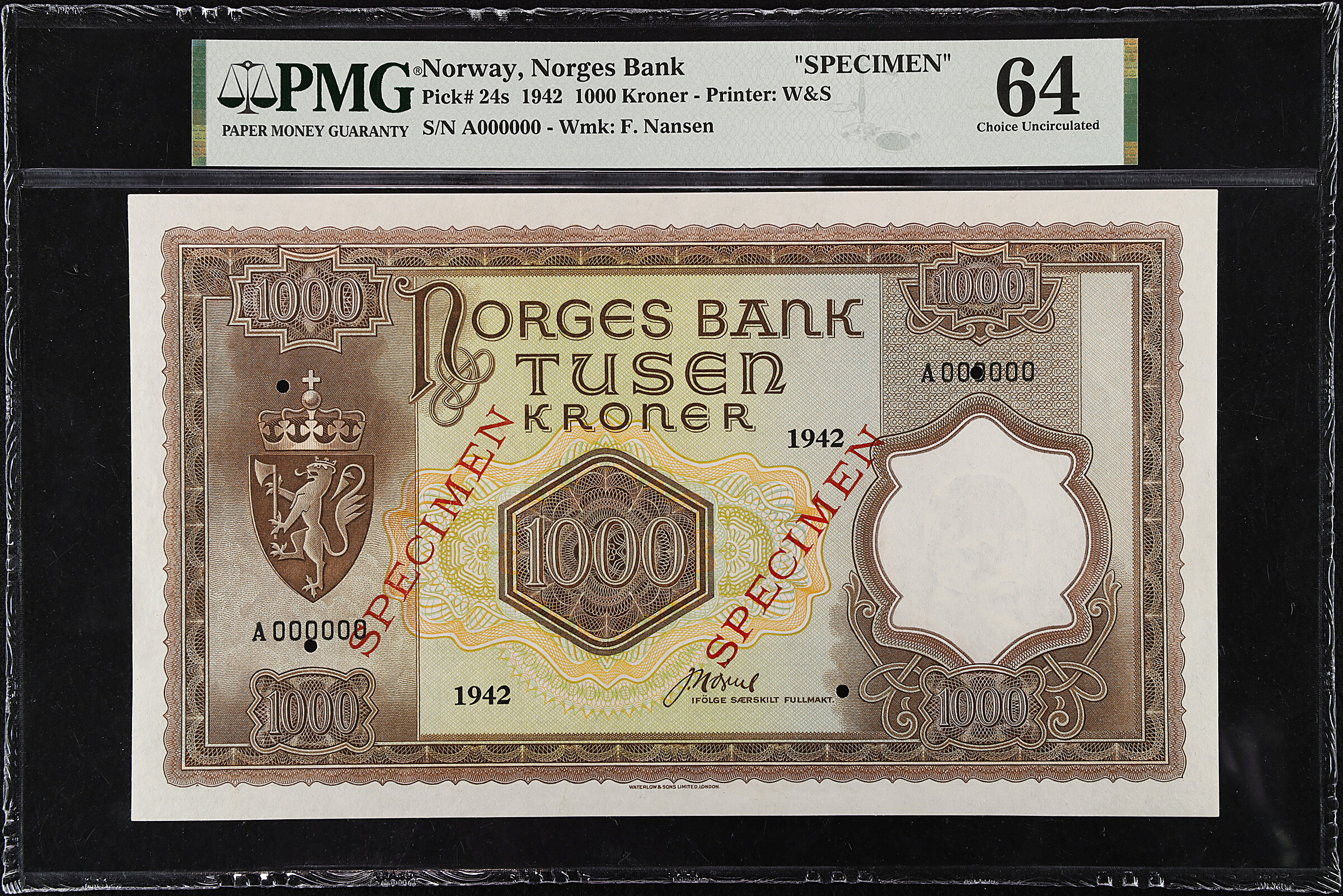 NORWAY. Norges Bank. 1000 Kroner, 1942. P-24s. Specimen. PMG Choice Uncirculated 64. Printed by Waterlow & Sons Limited, London. Watermark of F. Nansen. Prefix A. The 1942 series of Norwegian currency was requested by Norways government in exile, which was located in London from 1940 to 1945. King Haakan VII and his government left Norway a few months after the Nazi German invasion.

The Germans invaded Norway on April 9th, 1940 and met stiff resistance from Norwegian troops. Haakan and his government stood against the Germans, and did not capitulate. The allies landed in Northern Norway to assist in fighting off the German invaders, but as the action in France deteriorated, the British decided to evacuate all troops from Norway in late May of 1940. King Haakan and the government did not leave until June 7th. The evacuation of the King was costly for the British, as the German pocket battleships Scharnhorst and Gneisenau attacked and sunk the carrier HMS Glorious along with her destroyer escorts HMS Acasta and HMS Ardent. 1,519 British officers and men were lost when the three ships sank.<p>The government in exile was expecting the allies to land in Norway in 1942. This is the reason the government contracted W&S to print the 1942 series of currency.

The liberation of Norway would not come until 1945 however, as the Allies landed in North Africa, and made their way up through Italy before landing in France. Norway would be liberated by the Soviet Union and exiled Norwegian troops. This ultra high denomination note is the last lot of the complete set of 1942 specimens we are offering. This note is the only example listed on PMGs population report, and it is sure to turn a few heads when it crosses the auction block. Issued 1942 1000 Kroners were never officially released, and remainders are reported to have been punch cancelled and specimen overprinted. <p>This large format 1000 Kroner boasts beautiful, eye catching colors and well executed Scandinavian designs. The margins are broad, nicely framing this historic piece. The monogram on the back is of King Haakan VII, and this symbol was used extensively by the population of Norway and the Resistance, to show defiance against German occupation.

This specimen is sure to grab the interest of not only collectors of Norwegian currency, but also of WWII buffs as the historical importance of this note is immense. Most likely missing from the most advanced paper money collections, and we would not be surprised if our high estimate is met or exceeded to take this treasure home. PMG Pop 1/No Others Graded.

From the Scott Lindquist Collection.