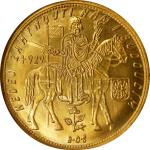 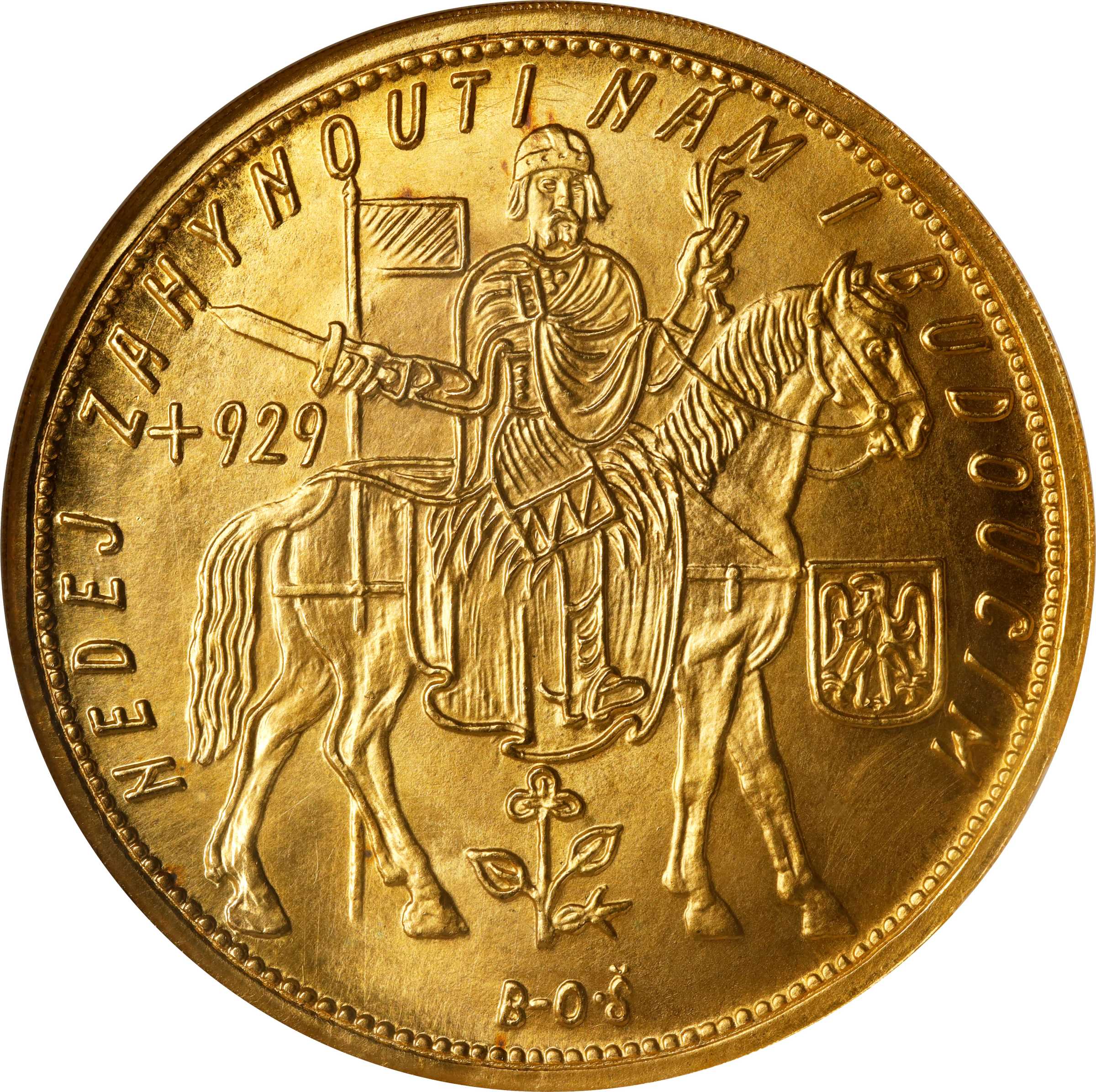 CZECHOSLOVAKIA. 10 Ducats, 1938. Kremnica Mint. NGC MS-67. Fr-4; KM-14; Novotny-19 (RRRR). Mintage: 192. There are very few coins that can match this one with its tremendous combination of beautiful preservation and story. The condition of this piece is unspoiled by virtually any flaw, avoiding any signs of handling or marking that might be expected given the intervening history of Europe since its striking in 1938. A bright and sunny luster is not impaired by haziness or spot, and just a small smattering of toning highlights the surfaces. The normal die working that is seen on the 1938 issue is evident on this piece, being most pronounced in the reverse shield.<p><p>Czech Mint records suggest that between the 192 strikes, 20 were given to private individuals and 172 were preserved for the Slovakian state, an administrative subdivision of the First Republic of Czechoslovakia. How many of these pieces survived the occupation of Czechoslovakia and the subsequent Second World War, not to mention the following communist occupation is unknown. Between PCGS and NGC, only 4 have been certified, with perhaps a handful more examples still extant beyond this. This miniscule figure highlights this pieces status as an <strong>ULTRA RARITY</strong> and provides some context on how elusive these pieces are. Examples of the 1938 10 Ducats seldom grace the collector market, ensuring this piece will achieve nothing short of a dizzying price. A piece that highlights the resolve of Czechoslovakia, as this massive issuance was one of the last from the First Czechoslovakian Republic.<p><em>In 1938 the First Republic of Czechoslovakia stared down a crisis, trapped against the aggressive Nazi Germany, Adolf Hitlers focus shifted to the Republic after Austria had been incorporated into Germany. Claiming to be acting in the defense of ethnic Germans in Bohemia and Moravia-Silesia, Hitler demanded the Sudetenlands absorption into Germany. Britain and France, still war weary from the Great War consented to this demand, without consultation of Czechoslovakia and in violation of Frances previous defense agreement with Czechoslovakia. In 1939 the remnants of the First Republic of Czechoslovakia were occupied by Germany as the Protectorate of Bohemia and Moravia. Britain and France watched the last remaining democracy in Central and Eastern Europe be absorbed under the yolk of tyranny, a tyranny that would continue until the Velvet Revolution in 1989 and the peaceful split of the Czech Republic and Slovak Republic in 1993. This 10 Ducats serves as one of the last physical reminders of the democratic and progressive Czechoslovakia and highlights the beauty and hope of all Democratic societies. A moving a powerful symbol of the triumph of the open society against the evils of both fascism and communism.</em> <strong>To view all items from the Augustana Collection, click <a href="https://auctions.stacksbowers.com/lots?sort=auction_date_lot_number_asc&search=the+Augustana+Collection&limit=36&lots_range=upcoming"> here.</a></strong> From the Augustana Collection.