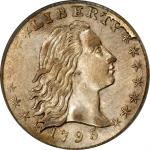 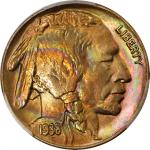 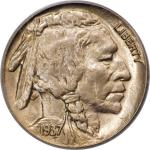 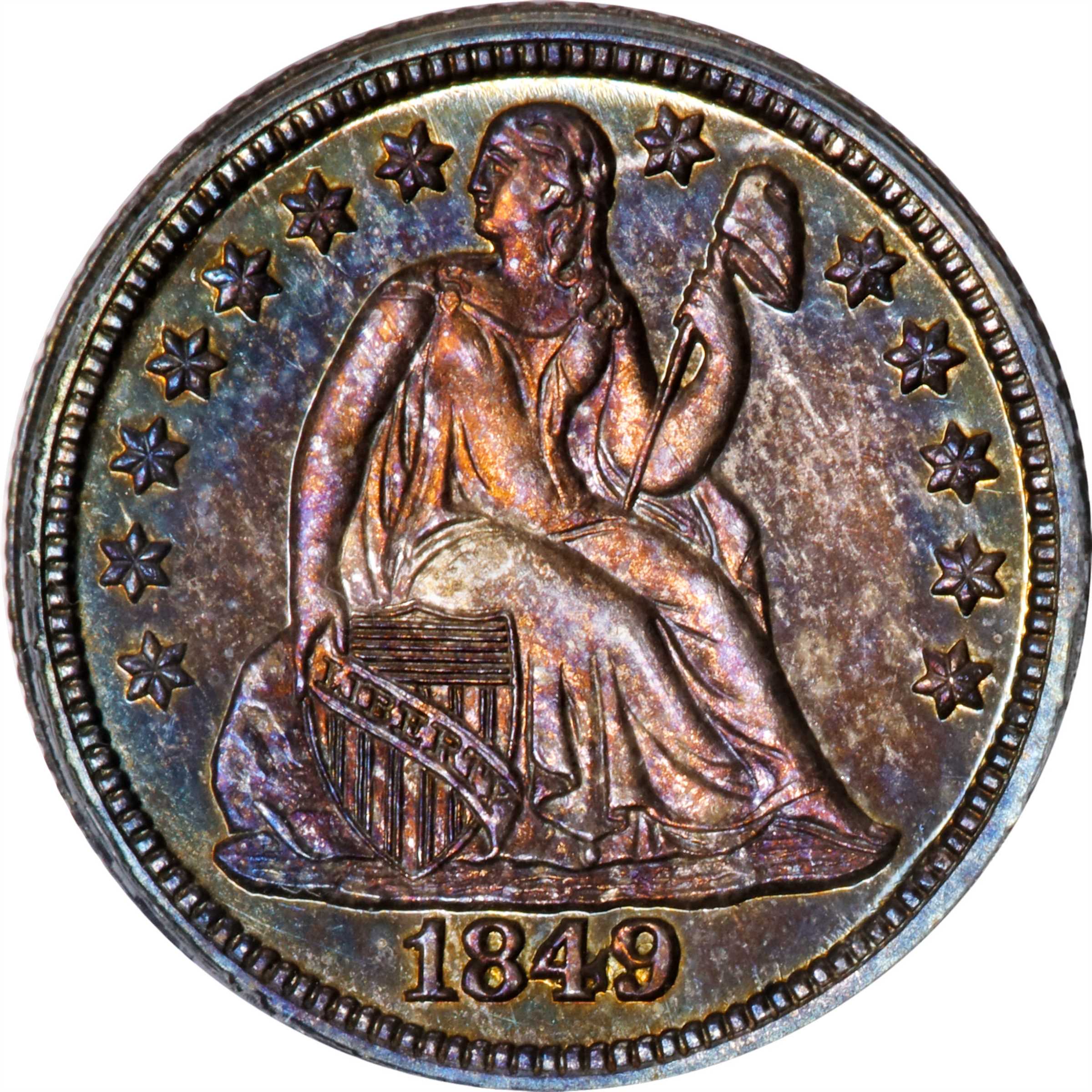 1849 Liberty Seated Dime. Fortin-107. Rarity-7+. Proof-66 (PCGS). CAC. OGH. Simply put, this is one of the rarest and most desirable coins in this sale. It is also beautiful, with both sides displaying a blend of lavender-gray and olive-charcoal patina. Iridescent undertones of antique gold, cobalt blue and salmon-pink are more vivid and varied on the obverse. The strike is razor sharp throughout, and the fields offer appreciable reflectivity under a light. Expertly preserved, visually appealing and undeniably rare, this coin would serve as a highlight in the finest collection of Proof Liberty Seated coinage. Struck at a time before the United States Mint began marketing Proof coins to collectors on a wider scale, the 1849 Liberty Seated dime is a major rarity in this format. For each year during the 1840s, the Mint produced only a few Proof sets for official purposes or distribution to the few numismatists active in the Northeast during that decade. Mintages were not recorded, so it is impossible for us to know exactly how many Proof 1849 dimes were coined. Given the paltry number of survivors (see below), we believe that no more than 10 specimens were produced. Perhaps not surprisingly, auction appearances for this issue are few and far between, underscoring the significance of this bidding opportunity. All known Proof 1849 dimes were struck from an obverse die that had long been considered an 1849/8 overdate. On the website seateddimevarieties.com , Liberty Seated dime specialist Gerry Fortin calls this attribution into question: "In 1849, the mint changed the logotype from the large dates of 1847 and 1848 to the smaller date punch found on 1849 dies. Acknowledging this fact, it is difficult to justify that the date on the 1849 obverse die would be an 1849/8 overdate given the large date punch of 1848. If one examines the date positions of the 1849 proof die against that of the 1848 dies, with the larger date punch, it is immediately evident that the 1849/8 overdate theory should be seriously questioned." In our opinion Fortin is correct, and we believe that the obverse die of this issue is a Repunched Date, not an overdate. We are able to trace this jewel back over 75 years to J.C. Morgenthaus sale of January 1943. It appeared in lot 443 and was called "Brilliant proof. Ex[tremely] rare" and garnered a top bid of $26 which was remarkable for the era. The winning bidder was famed Proof specialist Floyd T. Starr, in whose collection this piece would reside for the following five decades. We had the privilege of selling Starrs legendary collection over the course of two sales, dispersing his incredible cabinet of half cents and large cents in our (Stacks) sale of June 1984, and later handling his gold, silver, and minor coinage in October 1992. This coin was featured as lot 366 in the October 1992 auction, cataloged as a "Gem Brilliant Proof" having "virtually flawless fields." For most of the three decades since, it has seemingly been handled privately, emphasizing the present public offering as a truly significant event for Liberty Seated dime specialists. We have been able to positively confirm the existence of just four Proof 1849 dimes: 1 - <strong>PCGS Proof-66</strong>. Ex J.C. Morgenthaus sale of January 1943, lot 443; our (Stacks) sale of the Floyd T. Starr Collection, October 1992, lot 366; our ANA Auction of August 2018, lot 1115. <strong> The present example </strong>. 2 - <strong>PCGS Proof-66</strong>. Ex our (Stacks) sale of the James A. Stack, Sr. Collection, January 1990, lot 86; Heritages sale of the Phil Kaufman Collection of Early Seated Proof Sets, Part III, April 2008, lot 2389; Heritages sale of the Greensboro Collection, Part I, October 2012, lot 3948; Bill Nagle, October 2012; Heritages sale of the Eugene H. Gardner Collection, June 2014, lot 30289. 3 - <strong>NGC Proof-65</strong>. Ex our (Bowers and Merenas) sale of the Louis E. Eliasberg, Sr. Collection, May 1996, lot 1137; Heritages sale of the Lark Collection, March 2006, lot 458; Heritages Rosemont Signature Auction of August 2013, lot 5562. 4 - <strong>PCGS Proof-64</strong>. Ex Hollinbeck Stamp & Coin Co., lot 130, date of sale not recorded; David W. Akers sale of the John Jay Pittman Collection, Part I, October 1997, lot 602; David Lawrences sale of the Richmond Collection, Part III, March 2005, lot 1243; Heritages New York Signature Auction of June 2005, lot 5378; Simpson Collection; Legend Rare Coin Auctions Regency Auction VIII, July 2014, lot 71; Heritages FUN Signature Auction of January 2015, lot 4070. PCGS# 4736. NGC ID: 23C5. PCGS Population: 2; 0 finer. CAC Population: 2; 0. From J.C. Morgenthaus sale of January 1943, lot 443; our (Stacks) sale of the Floyd T. Starr Collection, October 1992, lot 366; our ANA Auction of August 2018, lot 1115. 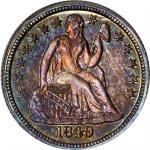 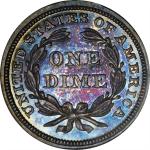