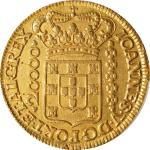 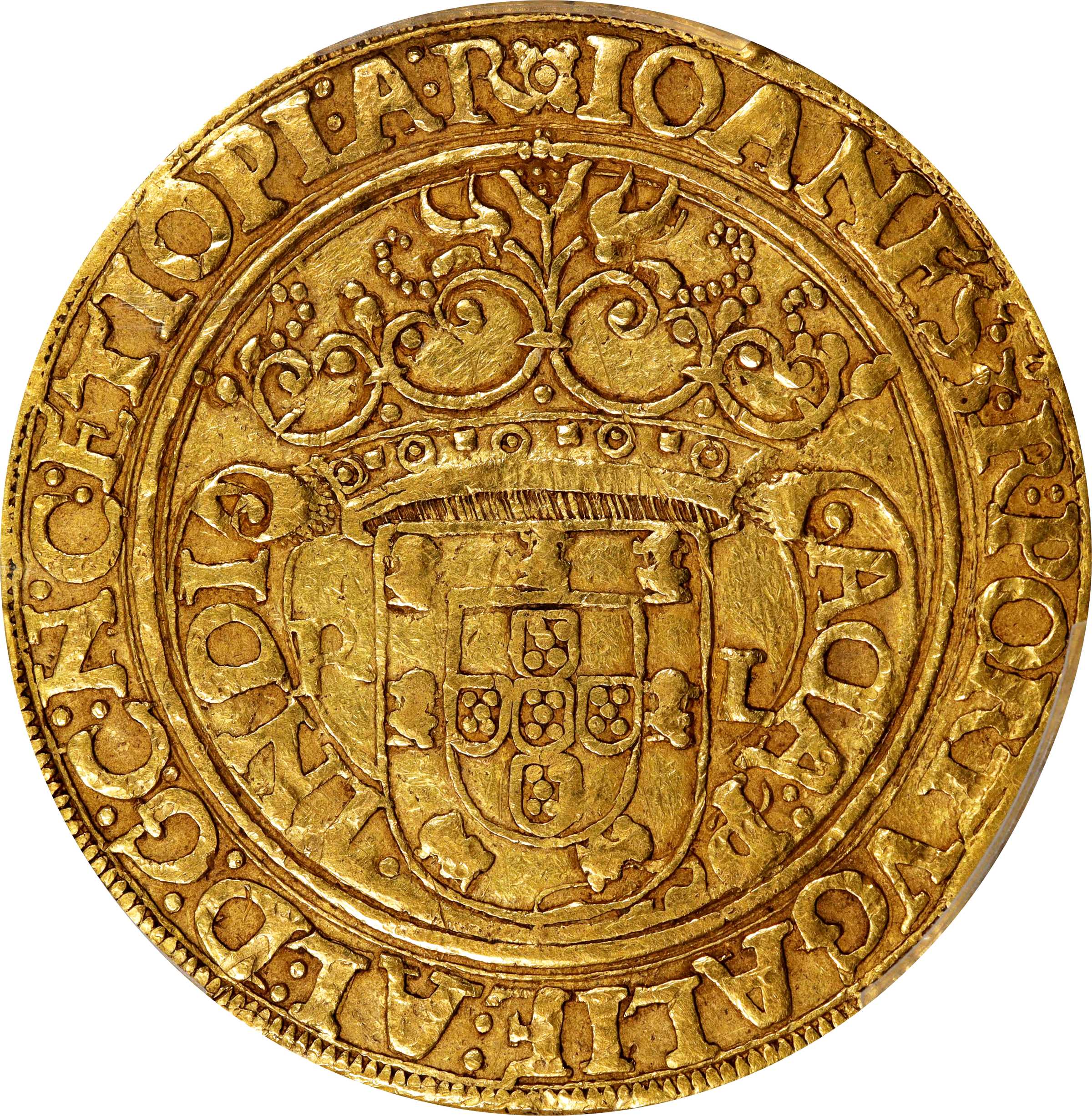 PORTUGAL. 10 Cruzados (Portugues), ND (1521-57). Lisbon Mint. Joao III. PCGS EF-45. Fr-24; cf. Gomes-195.03 (legend); Vaz-J3.06 (M.R.). Obverse: IOANES.3.R:PORTVGALIE:AL:D:G:C:N.C:ETIOPI:A:R, Portuguese coat-of-arms between R (mint masters Initial) and L (mintmark), ADIA:P. INDI flanking; Reverse: IN▶: HOC.▶: SIGNO:▶: VINCEES, voided cross potent within polylobe and surrounded by open scroll; sun with six pellets at the beginning of the legend. Magnificently impressive and <strong>EXTREMELY RARE</strong>, this enticing example of early Portuguese gold was the largest denomination produced at the beginning of the Portuguese Empire and meant to celebrate the growth of the her overseas possessions. Portugals early forays into India and Africa in the 15th and 16th centuries had made the country phenomenally wealthy and the 10 Cruzados was the most opulent way to demonstrate this new wealth. <p>The artful dies were produced by Alvarez and there is a careful precision about the workmanship with fine detail engraved into the devices and legends. The obverse legend variety appears to be highly unusual, if such a thing can be said to exist on this always uncommon denomination, with this cataloger being unable to find a parallel example in Gomes or the Numismatic Museum of Portugal Collection. Saltons notes suggest another example may exist in the Portuguese collection, but this is unconfirmed. Nevertheless, the example stands as one of the preeminent European <strong>RARITIES </strong>and an example that is certain to drive much interest. This example displays some soft circulation and hints of strike weakness, most evident on the reverse. A few instances of scratching and scuffing are noted, but nothing too effacing of detail. Though PCGS does not note it on the holder, there is some evidence that this piece might have been used in jewelry in the past. When considering these drawbacks, one must note the general impossibility to acquire this type. This example has been off the market since 1910, and it is unlikely to resurface again for years. Given this state of affairs, we expect this example to perform quite well and for this piece to end up in the cabinet of an advanced European gold collector. <strong>To view all items from the Mark and Lottie Salton Collection, click <a href="https://auctions.stacksbowers.com/lots?sort=auction_date_lot_number_asc&search=Salton+Collection&limit=36&lots_range=upcoming"> here.</a></strong> From the Mark and Lottie Salton Collection.<p>Ex: Dr. Julius Meili Collection (J. Schulman - 5/1910) Lot # 253.