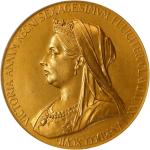 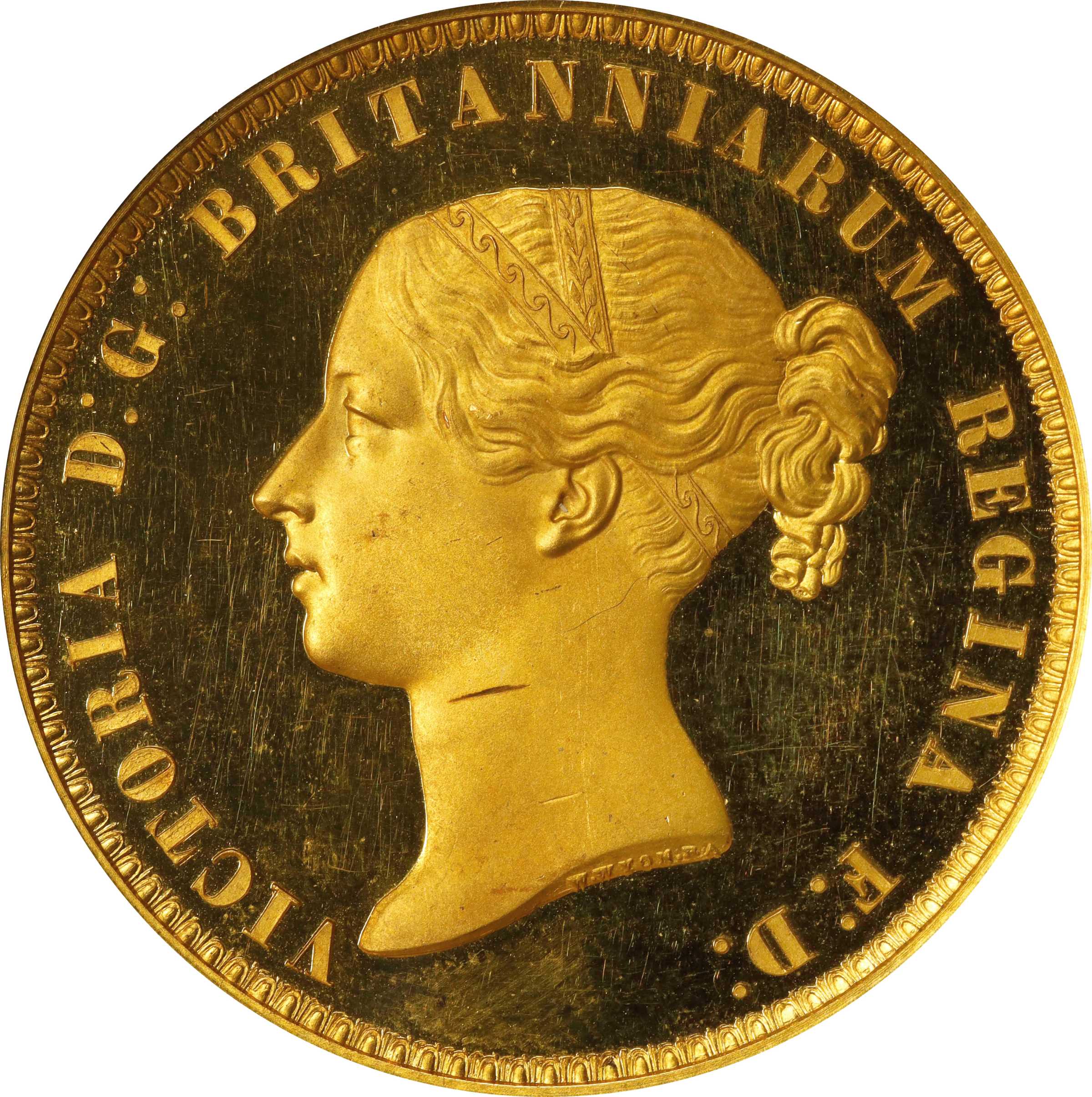 GREAT BRITAIN. Gold "Una and the Lion" 5 Pounds Pattern, 1839. London Mint. Victoria. NGC PROOF-64. S-3851; Fr-386; KM-742; WR-279 (R2); Linecar and Stone-18. Surmounting a pinnacle of pure artistic beauty that is to only be approached rather than overtaken, the "Una and the Lion" Pattern in gold epitomizes the form of beauty on its generously sized gold flan. Conceived in the mind of William Wyon, whose initials grace both sides of the design, it takes inspiration from the epic poem of Edmund Spenser, <em>The Faerie Queene. </em><p>Una in the poem represents the Truth or the True Church, and her name derives from the truth being unified as a singular entity. Her accompaniment is the Redcrosse Knight, emblematic of England. The Redcrosse Knight is convinced to leave Una by the sorcery of the wizard Archimago, who convinces him that Una is unchaste. Una is attended to by a lion as she searches for the knight, who has been taken captive by the giant Orgoglio, on the orders of Duessa, representative of the false or Roman Catholic Church. Una herself is carried off after the lion is killed, only to be saved by the fauns and satyrs. Una then is able, with the assistance of King Arthur, to free the Redcrosse Knight from his captivity, and Una and he are betrothed. <p>Linecar and Stone take the position that it is this story, and the rather helpless nature in which Una is displayed, as the ultimate reason for rejection of this design as opposed to the alternative hypothesis presented that the coin was "too medallic." It simply would have been in rather poor taste to portray the new monarch Victoria as Una, as this would belie the strength and resolve of the monarch. The surviving examples of these most sublimely exultant pieces were offered as part of a set offered in 1839 sold directly to collectors, as the numismatic value likely always exceeded 5 Pounds. The actual numbers produced, either for the individual varieties or the series as a whole, are unknown, but it likely did not stretch beyond a few hundred. <p>The present example displays an unhindered example of Wyons vision in full glory, with the painstakingly engraved details of Victorias bust being perfectly transferred to the planchet. The reverse even surpasses this, with the proud lion treading leftwards, demonstrating a full mane of individually grained hair. Victoria as Una is well apportioned in her full regal adornments, with a portraiture worthy of The National Gallery. The proof quality of this example demonstrates the capability of the Royal Mint at the time, with deeply mirrored fields that are so reflective that one can stare back at themselves and contemplate their being-in-the-world. The frosting on the devices is rather full and comprehensive, save for one break on the neck of Victoria. This incredibly deep cameo nature of the piece only adds to the artistry of the engraving. Some soft friction is seen in the fields, though this is about as marginal as friction can be, and is essentially irrelevant given the general desirability of the piece. <p>The captivating glamour and <strong>RARITY </strong>of this piece cannot be understated. Interest in this type has gained since the Royal Mint produced their "Great Engravers" series, with much of this naturally being directed back at the few originals that survive to present. We expect much competitive bidding, and therefore have high expectations for this most desirous of patterns, as reflected in our estimate. Any collection of British coins cannot claim to be complete without an example of the fabled "Una and the Lion," and this lion offers the chance for the most advanced of collectors to acquire a piece that highlights the medieval folklore of England, the splendor and glory of Victorian England, and the Neoclassical movement in one coin. <strong>To view all items from the Augustana Collection, click <a href="https://auctions.stacksbowers.com/lots?sort=auction_date_lot_number_asc&search=the+Augustana+Collection&limit=36&lots_range=upcoming"> here.</a></strong> From the Augustana Collection.