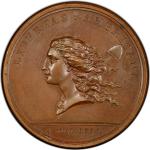 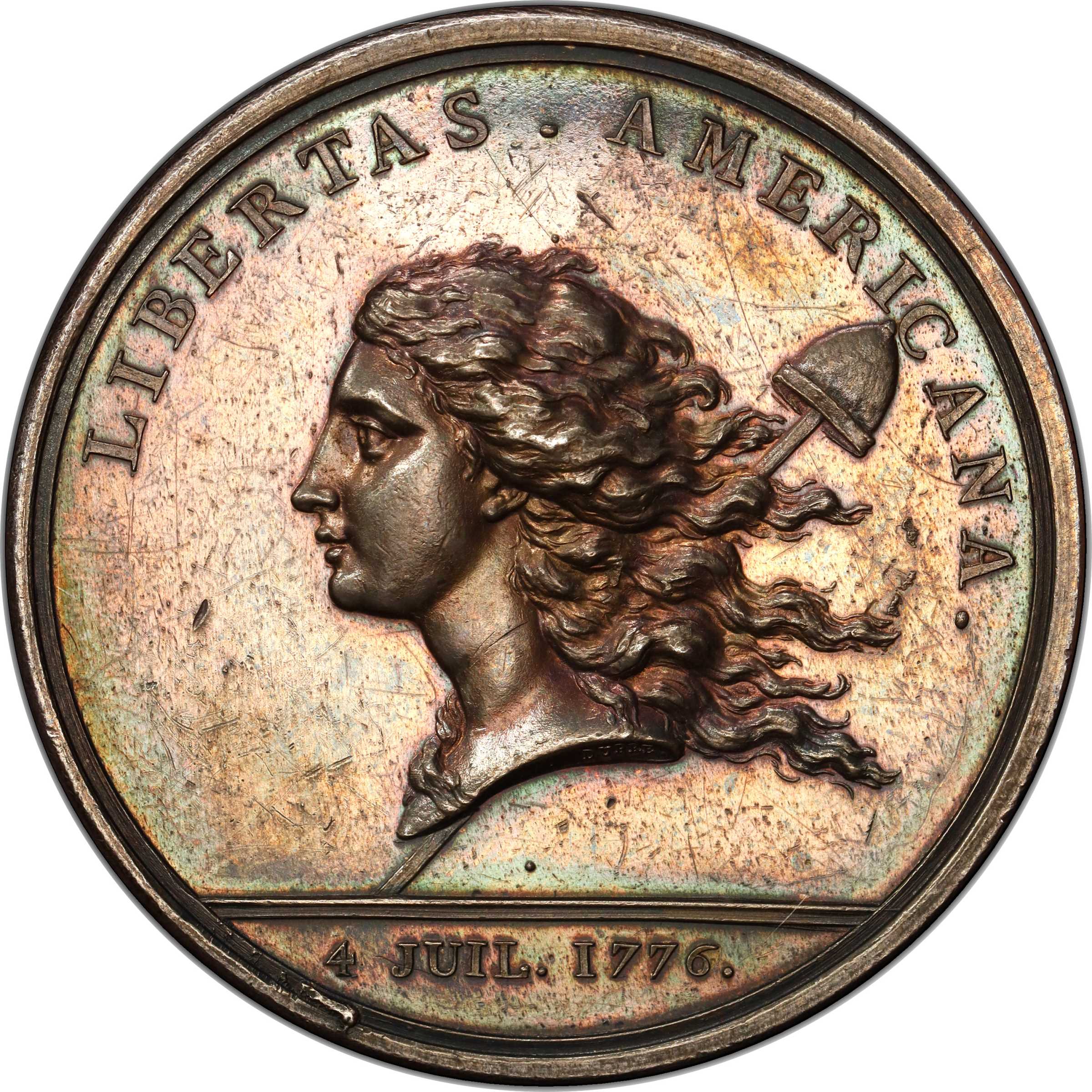 1781 (1783) Libertas Americana Medal. Original. Paris Mint. By Augustin Dupre. Adams-Bentley 15, Betts-615. Silver. MS-62 (PCGS). 839.2 grains. 47.7 mm. A reflective and beautifully toned specimen of Americas most important historical medal. Both sides are superbly struck and fully detailed, with blends of rose and deep blue on the silver-gray obverse and more pastel reverse toning of sea green, violet, and champagne gold. The eye appeal and originality are positively superb for the assigned grade. Both sides show a scattering of little marks and lines, none particularly serious, though we note a contact point midway between the top of the head and the first A in AMERICANA and another equidistant from the rim at 9 oclock and Libertys chin. The die state is typical. The eye appeal is far better.<p><p>No other medal in the canon of American numismatics is invested with so much history and importance as the Libertas Americana medal. It followed the declaration of American independence, whose date is placed in the obverse legend, and the support of France in the American cause. The two greatest American victories, that of Gates at Saratoga and Washington at Yorktown, are referenced with dates in the reverse exergue. The British armies defeated on those dates, Burgoynes force at Saratoga and that of Cornwallis at Yorktown, are incorporated into the reverse allegory as the snakes strangled by Hercules in his crib. In that allegory, France is depicted as Minerva, defending the infant from the lioness, Great Britain, whose tail curls between her hind legs. The obverse design influenced many of the depictions of Liberty that would come from the first United States Mint, directly inspiring the Liberty Cap design found on copper half cents and cents in the 1790s. Dozens, perhaps hundreds, of later American medals and tokens used the design, from privately issued business cards to the United States Mints 1945 Assay Commission medal. Its image was featured on contemporary engravings and textiles, and examples could be found in the 18th century in the collections of Thomas Jefferson, George Washington, John Adams, and more. No founding father is as closely associated with the medal, of course, as Benjamin Franklin. The medal was his brainchild and pet project, an achievement of which he was rightly proud.<p><p>The importance of the Libertas Americana medals history follows every specimen regardless of its condition, but it sure is easier to appreciate on one this pretty and well preserved. Silver medals were largely distributed to diplomats, high ranking officials, Franklins Parisian circle, and European institutions. While the original recipients were often people of wealth and prestige, few were numismatists, and most of these ended up heavily polished - treated the same way other silver objects dart would have been treated in such households. The typical grade for a silver Libertas Americana is in the EF-AU range, with many of the lightly polished survivors squeaking into the lowest reaches of Mint State. This example has largely avoided the typical misadventures, with superb color and surfaces that not one in 20 silver examples of this medal can claim. Furthermore, silver examples are probably 10 times rarer than bronze ones, maybe even more.<p><p>Benjamin Franklin conceived the Libertas Americana medal as a talisman of Americas birth, symbolic of both the ideals of the young nation and the military battles it had to endure - and the divine and terrestrial assistance it needed - to emerge victorious. This medal was his pet project from design to distribution, and every medal extant can sincerely assert a provenance back to Franklin himself. More recently, this specimen was acquired privately from Syds friend Roger Siboni. PCGS# 151000. From the Sydney F. Martin Collection. Earlier ex Roger Siboni, September 2010. 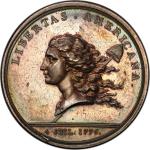 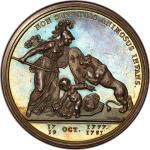