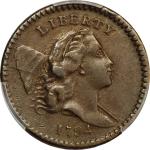 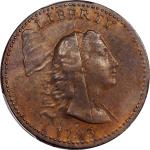 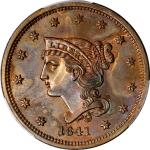 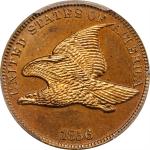 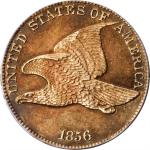 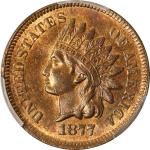 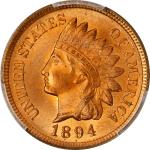 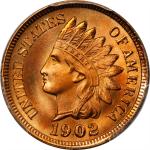 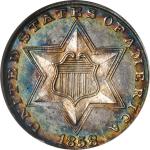 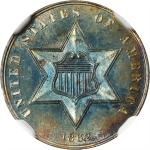 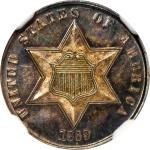 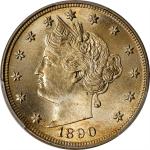 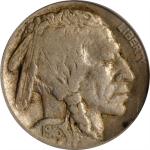 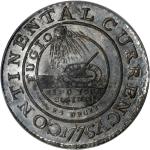 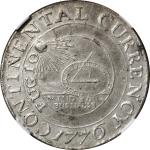 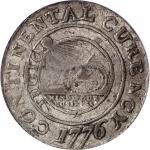 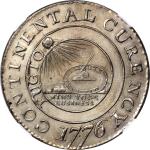 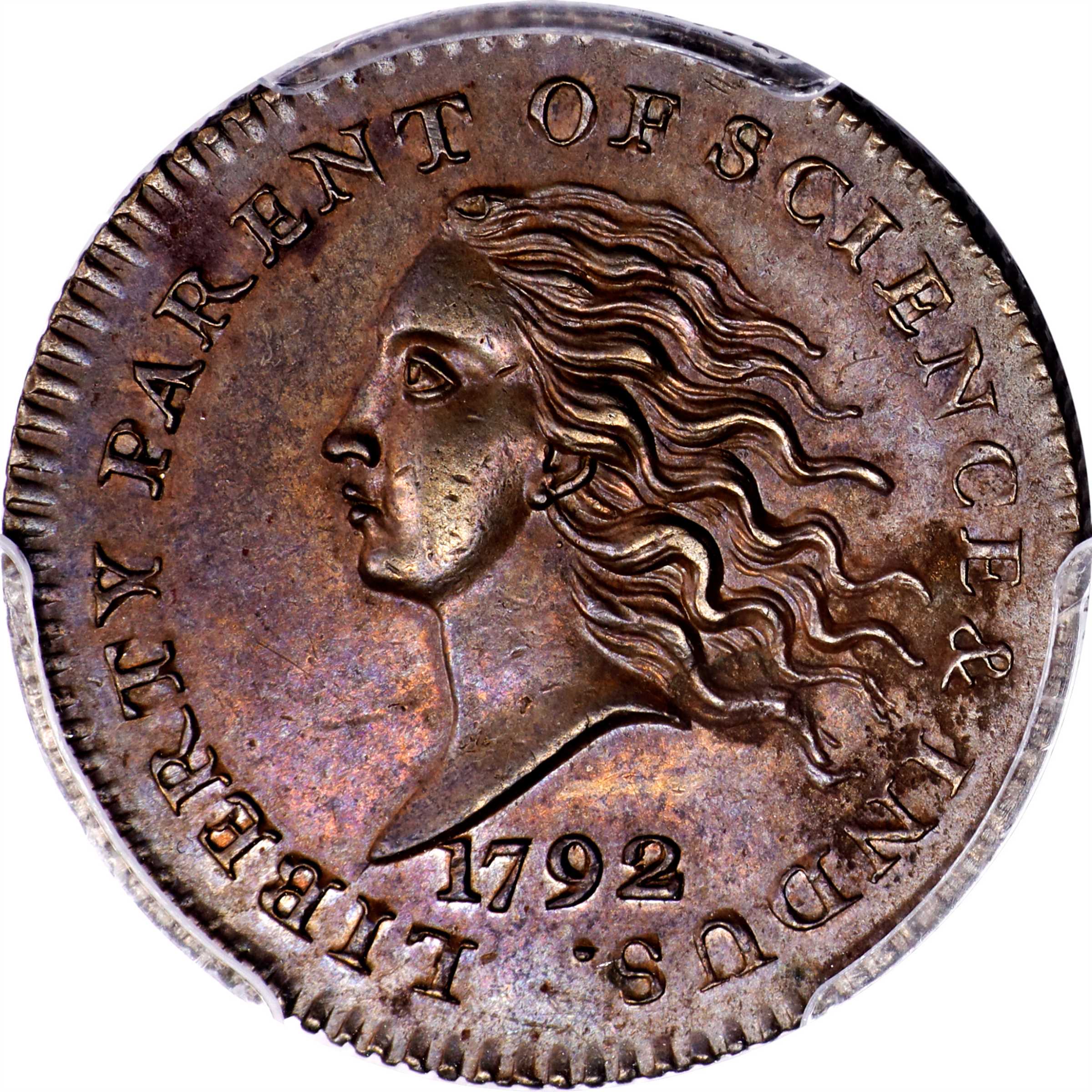 1792 Disme. Judd-10, Pollock-11. Rarity-6+. Copper. Reeded Edge. MS-62 BN (PCGS). CAC. <strong>Obv:</strong> A bust of Liberty with flowing hair faces left, the date 1792 below and the inscription LIBERTY PARENT OF SCIENCE & INDUS. around the border. <strong>Rev:</strong> A small eagle with spread wings is centered in the field with the legend UNITED STATES OF AMERICA around the border and the denomination DISME below. Clearly any 1792 issue is of special importance and interest, but the disme is truly foundational to our monetary system. It was the lynchpin of Jeffersons decimal plan, the small denomination that held the decimal place between the lowly cent and the mighty dollar. Jefferson conceived it as equal in value to the Spanish half pistareen, which he described as "a coin perfectly familiar to us all." Though the disme was a key part of the 1792 experimental program, struck in both silver and copper, with edges that were both plain and reeded, the circulation dime program was bogged down early, as few depositors wanted their silver back in the small denomination, preferring dollars or half dollars instead. The first regular issue "dimes" for commercial use were not forthcoming until 1796, at which time an entirely new design had been introduced.<p>This is one of the most significant 1792 dismes extant, the CC#2 coin for Judd-10 in copper with a reeded edge, as listed in the outstanding 2017 reference <em>1792: Birth of a Nations Coinage</em> by Pete Smith, Joel J. Orosz and Leonard Augsburger. It is a crisply impressed, sharply rendered example that allows full appreciation of this historic design. Both sides are uncommonly smooth for the assigned numeric grade with only a few trivial marks scattered about, none of which are particularly noteworthy. Accuracy does compel us to mention a small patch of ancient corrosion within Libertys lower hair curls, as well as another dull reddish patch inside the obverse border at 10 oclock. Full denticulation encircles both sides, the strike generally well centered, although the left obverse border is a bit broader than the right. Color is a pleasing olive-brown overall, but with considerable golden-lilac on the obverse, warmer lilac-blue on the reverse, both representative of faded mint red. Expertly produced, carefully preserved, and visually appealing.<p>There are only three silver 1792 dismes known, making it one of the most august American rarities. In the aforementioned work <em>1792: Birth of a Nations Coinage</em>, the authors recorded 19 discrete specimens of Judd-10 in copper. One is silver-plated, one is graded Poor-1 (PCGS), and three are impounded (Smithsonian, Byron Reed / Durham Museum, Independence National Historic Park). Most are well worn; just seven of those listed are graded AU-55 or higher. Three additional specimens of Judd-11, with plain edge, are known, one of which is badly disfigured. The only copper example of either edge type finer than that offered here is the marvelous Garrett-Simpson specimen, currently certified Specimen-64 BN by PCGS.<p>The usage DISME can be traced back to the pioneer work in decimal mathematics of Dutch mathematician-engineer Simon Stevin (Latin, Stevinus) of Bruges (1548-1620) in his book <em>De Thiende, the Tenth</em>, translated into French as <em>Disme</em>. The "Tenth" was, after all, the basis of decimalization, although American usage quickly simplified the spelling to dime.<p>Andrew W. Pollock III in his 1994 book <em>United States Patterns and Related Issues</em> provides the following commentary:<p><em>"The obverse design clearly appears to have been inspired by Augustin Dupres Libertas Americana medal, but what is more remarkable is that the Liberty head on the dismes appears to be almost identical to that on the 1793 half cents, except that the hair is arranged in a somewhat different manner.</em><p><em></em><em>"The obverse has been attributed by Walter Breen to Adam Eckfeldt on the basis of an old numismatic tradition published in W.E. Woodwards sale of the Jeremiah Colburn Collection that Eckfeldt has presented one of the startlingly similar 1793 half cents to a gentleman as a sample of his work....</em><p><em></em><em>"There is no documentary evidence available to indicate when in 1792 the dismes were coined. It has been suggested that the dismes may have been minted at about the same time as the half dismes. This is based partly on the stylistic similarity between the reverses of the two denominations. Both reverses feature flying eagles, and the layout of the lettering is similar. We note also, that Miss Liberty is facing to the left on both denominations, whereas she is facing to the right on all of the other 1792-dated patterns....</em><p><em></em><em>"Significantly, the dismes are very nearly the same in diameter as the 1792 small cents, and it seems probable that the same planchet cutter was used to prepare the flans for both denominations."</em> PCGS# 11026. NGC ID: 294H. PCGS Population (Judd-10 attribution only): 1; 1 finer (Specimen-64 BN). From the Cardinal Collection Educational Foundation. Earlier ex Peter Gschwend; Thomas L. Elders sale of the Peter Gschwend Collection, June 1908, lot 117; Dr. J. Hewitt Judd Collection; Abe Kosoffs Illustrated History of United States Coins FPL, 1962, lot 14; later, Stuart Levine, March 26, 2001; Ed Price; Heritages sale of the Ed Price Collection, July 2009 Baltimore ANA Signature Auction, lot 1406; Heritages sale of the Greensboro Collection, Part I, October 2012 Dallas Signature Auction, lot 3873. 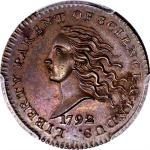 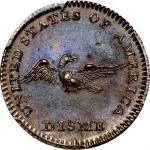