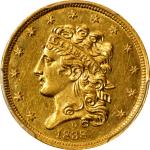 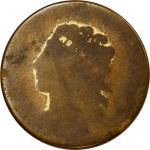 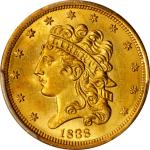 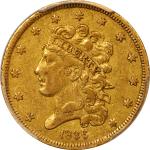 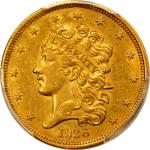 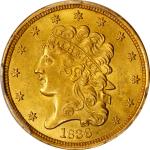 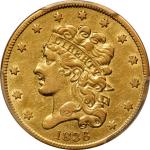 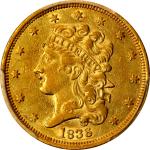 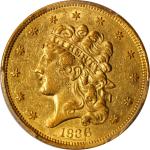 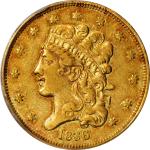 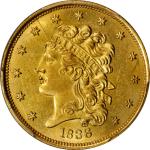 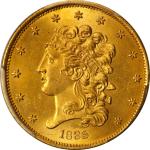 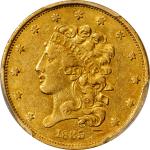 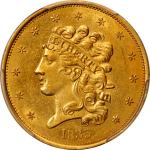 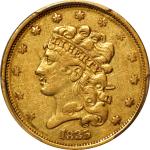 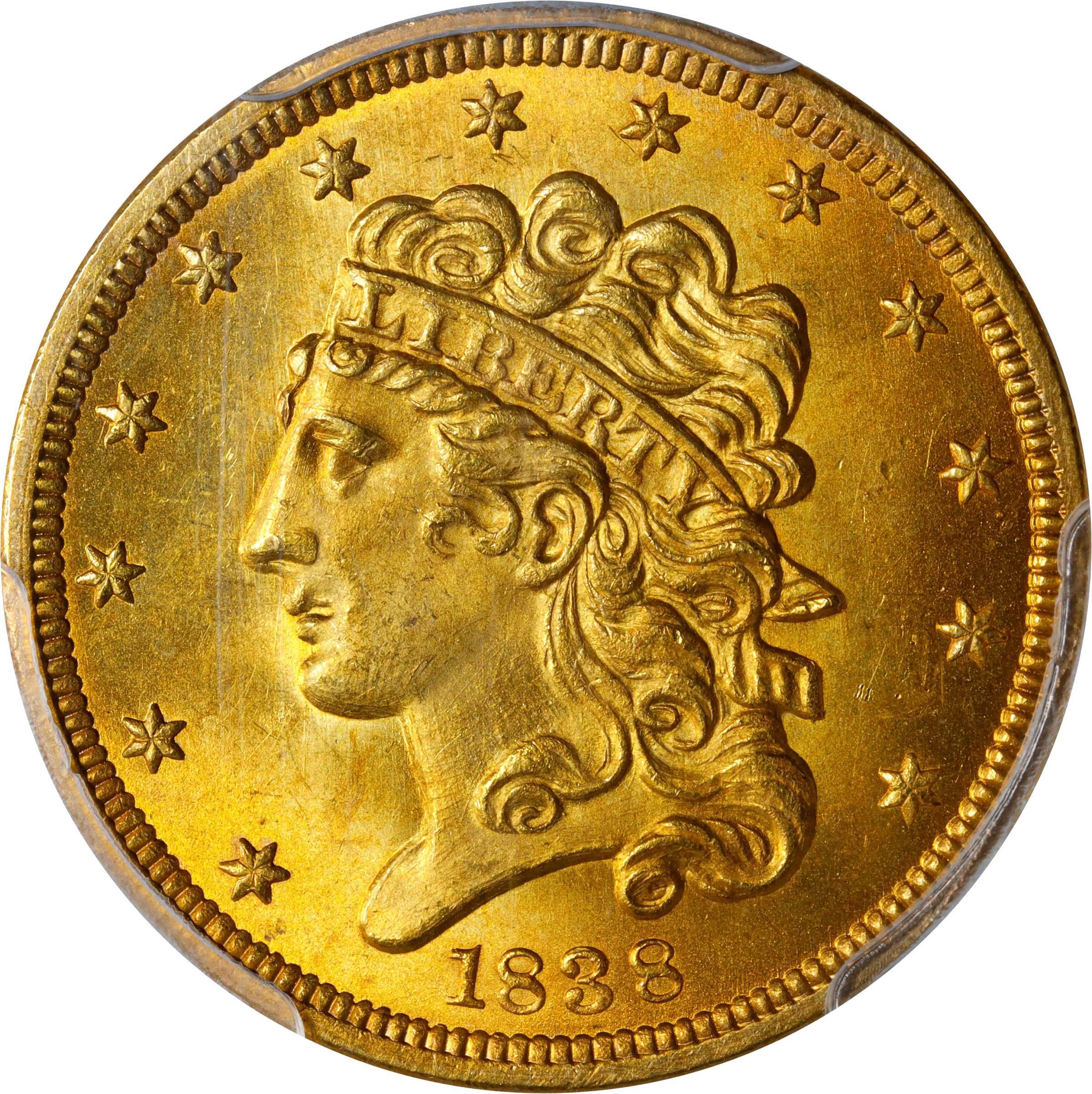 1838 Classic Head Half Eagle. HM-2. Rarity-3. MS-66 (PCGS). CAC. <strong>Die Variety: </strong>HM-2. Obverse 2: The lack of a centering dot within Libertys ear distinguishes this die from Obverse 1, the only other obverse of the 1838 Philadelphia Mint issue. Reverse N: The middle arrow shaft is complete within the eagles talon, sufficient to identify this reverse die, which appears in no other pairing in the Classic Head half eagle series.<p><strong>Die Emission Sequence: </strong>With no known linkage to any other dies in this series, the exact position of the 1838 HM-2 attribution in the emission sequence relative to the HM-1 pairing of this date is unknown for certain, though it is likely that this variety without the center dot came first.<p><strong>Die State: </strong>The perfect and more common state of the dies.<p><strong>Estimated Surviving Population for the Variety:</strong> 365 coins in all grades (per Daryl J. Haynor, 2020), or 52% of extant 1838 Classic Head half eagles.<p><strong>Strike: </strong>An exacting strike has imparted razor sharp to full definition to virtually all design features. There is only the most trivial softness on the obverse at the top of the fillet, in the centers of a few stars, and along the left border of the shield on the reverse.<p><strong>Surfaces: </strong>A glow of deep orange toning surrounds rich yellow-gold centers, all wrapped in luxurious satiny luster. Blessed with stunning aesthetic appeal, this coin offers even the perfectionist little to dislike. Numismatic perfection is, aside from coins made in modern times for collectors, asymptotic, an ideal more than a grade, so scrutiny will find the single hairline on Libertys lower jaw and the tiny dig above the period following the denomination. However, even a lifetime of study will turn up little else. The quality of this coin is even finer than the assigned grade promises, and the aesthetic appeal is difficult to express without holding it in hand.<p><strong>Commentary: </strong>The (marginally) more common attribution of the issue, HM-2 accounts for slightly more than half of extant 1838 half eagles, and approximately two-thirds of Mint State survivors. This is the single finest example of this issue certified by PCGS, surpassing two other splendid Gems that were also once part of the Pogue Collection, as well as all others PCGS has encountered. The bell curve of grades assigned among 1838 half eagles sees the highest distribution at the MS-63 and MS-64 levels, representing submissions rather than individual coins. Only four pieces have graded MS-65 or MS-65+. Since being certified nearly two decades ago, this remains the only MS-66. It is ranked CC#2 for the issue behind the virtually pristine National Numismatic Collection specimen graded MS-68 by Jeff Garrett and Ron Guth (2008). Since the latter coin is permanently impounded in the Smithsonian Institution, the Pogue-Virginian Collection example offered here is the finest 1838 half eagle available for private ownership. After over 15 years of searching, Haynor ranks this coin as the most eye-appealing Classic Head gold coin in existence. Its inclusion will forever define the significance of any gold collection, as it has done with the fabulous Pogue and Virginian cabinets. Stacks Bowers Galleries is once again honored to provide advanced numismatists with the chance of owning this national treasure among 19th century U.S. Mint gold coinage. PCGS# 765247. NGC ID: 25S4. PCGS Population (both die marriages of the issue): 1; 0. NGC reports no examples finer than MS-64.</p><p>CAC Population: 1; 0.</p> From the Daryl J. Haynor Virginian Collection. Earlier ex Al Adams, February 1995, by private treaty sale; Heritages sale of the Gold Rush Collection, January 2005 FUN Signature Sale, lot 30048; Heritages sale of the Madison Collection, January 2008 FUN Signature Auction, lot 3159; D. Brent Pogue Collection; our (in conjunction with Sothebys) sale of the D. Brent Pogue Collection, Part IV, May 2016, lot 4056, via Legend Numismatics. The plate coin for the 1838 HM-2 variety in the 2020 Haynor reference on Classic Gold coinage.