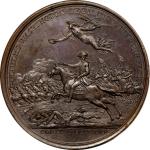 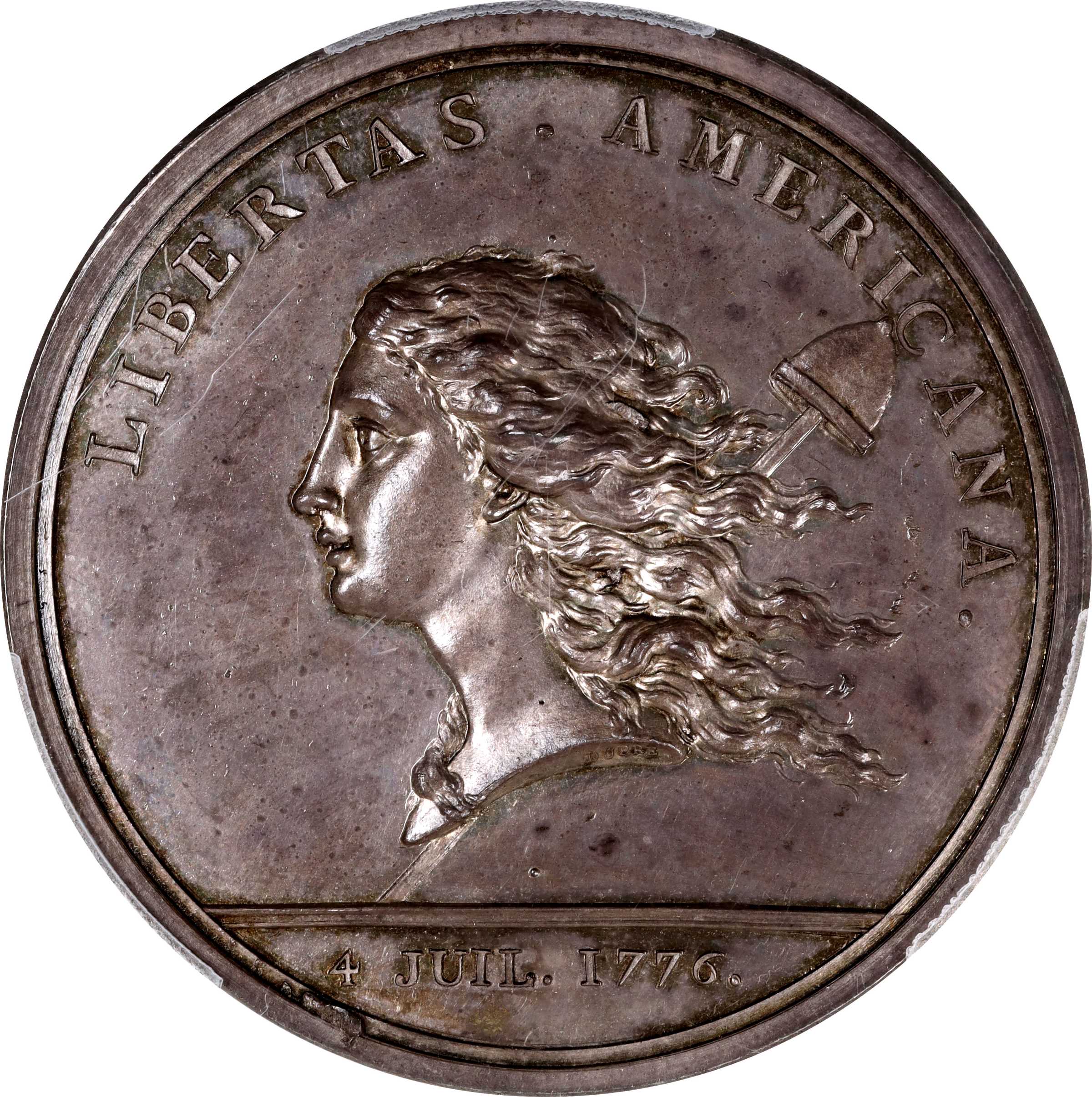 1781 (1783) Libertas Americana Medal. Original. Paris Mint. By Augustin Dupre. Adams-Bentley 15, Betts-615. Silver. MS-63+ (PCGS). An exceptional example of the single most famous and most desirable medal of the American Revolutionary era. Astonishingly beautiful toning graces both sides, gently overlaid by two dozen decades of gentle preservation in shades of pale blue and violet over largely brilliant surfaces. The toning is light and subtle, enriched with traces of gold and olive, a departure from the frequently dark or heavy coloration seen on silver examples of this medal. The sharpness is superb on both sides, and the surfaces have avoided any significant damage or handling. Beneath the portrait of Liberty, two small dark spots serve as distinguishing features, and a small area of above-surface roughness beneath JUIL is visible but similarly inconsequential to the magnificent eye appeal. The die state is remarkably early, retaining the guidelines used to punch in the letters in the reverse exergue, an aspect that quickly disappeared and is abraded away on all but the most high grade examples. This piece was among the first struck, likely among the first distributed, and remains among the very best to survive. Any Libertas Americana medal is special, with their personal connection to Benjamin Franklin and their superlative stature among American medals. Silver examples inhabit an outsized role, both for their unique visual appeal and their rarity. Among the rare space occupied by these elusive silver strikes, very few are nice: the population is dominated by those that have been handled and mishandled, dropped and cleaned, slid into and out of cabinets, darkly toned and reversed and toned again. This piece is a rather notable exception by virtue of its grade, its delicate toning, its originality, and its superb aesthetic impression. This example was acquired by B.G. Johnson, apparently from the Brand Estate, in the 1930s. It remained privately tucked away in the collection of pieces left to one of Johnsons assistants, a group of coins that eventually made its way to Spink Americas unassuming sale of June 1997. Acquired there by Alan Weinberg, it was sold privately to the Cardinal Collection and has remained off the market for many years. From the Cardinal Collection Educational Foundation. Earlier ex estate of Burdette G. Johnson; Spink Americas sale of June 1997, lot 63; Alan Weinberg collection; Cardinal Collection, via private transaction.