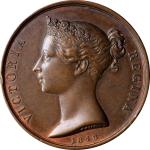 (1851) Army of India medal with three clasps. ASSYE, ARGAUM, GAWILGHUR. Silver, 36 mm. MY-104 (clasps iii, vi, vii), BBM-53. Swivel mount and scroll suspension. Extremely Fine. Edge impressed SERJt A. McRAE, 78th FOOT. Light blue toning over somewhat lustrous pale gray surfaces. Some evidence of handling and hairlines from an ancient polishing are visible, but the eye appeal is quite nice.<p>Army of India medals with three clasps are quite rare: MY notes just 150 issued. Sgt. Alexander McRae appears on the rolls for this medal and clasps. He also received a Military General Service medal and a clasp for JAVA, a medal sold at Christies in April 2000.<p>The 78th Highlanders was chock full of McRaes. Alexander was a Sergeant and quartermaster of the unit, earning his clasps at Assye (September 1803), Argaum (November 1803), and Gawilghur (December 1803). The latter two clasps are quite scarce, with just 122 awarded to Europeans for Argaum and 113 awarded to Europeans for Gawilghur. For those two, the 78 Highlanders took home 34 and 22 clasps, respectively. The Battle of Assaye was the largest of the three engagements, with 4,000 troops serving under Gen. Arthur Wellesley (later, the Duke of Wellington). The 78th was one of three British regiments serving directly under Wellesley and earned Assaye as one of their battle honors.<p>Offered with an appropriate pale blue ribbon, likely original. From the Gem Collection. <p> Earlier from our (Stacks) sale of December 1995, lot 1183.<p>