清代皇室用布料一组3幅，绣有吉祥图腾，保存完好，极具历史意义。Qing Dynasty, a group of 3x cloth from empire costume, with embroider

法国天主教传教士董文学1840年于武昌殉道银质纪念章，EF，保存完好，十分少见。China/France, a silver medal of Jean Gabriel Perboyre to com

大清钦差大臣赏给功牌，GVF，有氧化，罕见。Qing Dynasty, a large size Merit Medal of the Imperial Envoy, mounted on a met

北洋大臣奖天津欢迎展览会银牌，有氧化，连黑盒，VF，甚少见。Qing Dynasty, a silver medal awarded by the Imperial Envoy for the Tie

清代云贵大臣优等奖牌银章，第五等，带蓝调包浆，EF品相，十分罕见。Qing Dynasty, a convex silver medal issued by the Governor of Yunna

北洋政府最高等级银质珐琅彩大勋位章 完未流通 the Order of Rank and Merit Grand Order 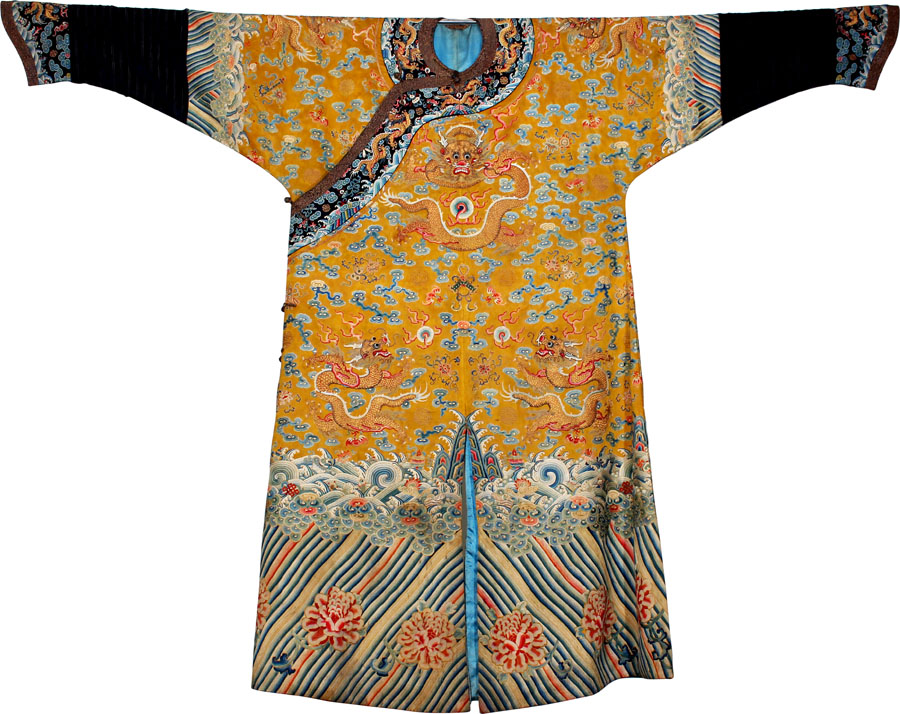 Qing Dynasty, a dragon robe from Daoguang period, This piece was once collected by a family of German representative in China in 1918~1924 and sold in Europe later.Robes decorated with dragons are the quintessential Qing dynasty garments. They were the dress of imperial government-not its ritual and ceremonial functions, but its civil administration. As a result, they became supreme significant social markers representing access to power. The right to wear such garments was dependent on rank and status.Throughout history, the Qing Manchus were keenly aware that the image they projected was especially evocative and powerful. From the outset of Manchu ambitions to rule the Chinese empire, dress was an essential tool to communicate legitimacy and heritage. A distinctive form of dress therefore was developed.The source for the Manchu dragon robes can be traced to the rulers of the previous dynasty. Dragon patterns had decorated Chinese imperial dress since at least the tenth century. Longpao were classified as jifu, literally "auspicious dress," that was worn for occasions celebrating the power and authority of the Qing government. The construction of these robes emphasized multiple fabrics and characteristic features: loop and toggle button fastenings, curved front overlap closing to the right, long tapered sleeves with extensions of contrasting fabric, flaring matixiu, or horse hoof cuffs, deep vents front and back for men and at the sides for women that imitated horse-riding garb.While the earliest Qing longpao followed the Ming pattern of a single or a pair of dragons extending the full length of the coat,5 from the early-eighteenth century this configuration changed. Manchu dragon robes began displaying a design of nine dragons: four radiating from the neck on the chest, back, and shoulders. These pointed to the direction of the cardinal points on the compass when the wearer was aligned with the strictly north-south orientation of the Forbidden City. Four additional dragons on the skirts-two at the front and two at the back-indicated the intermediate directions. A ninth dragon, unseen, was placed on the inner flap. The dragon robe of the Daoguang period in this auction is exquisite in craftsmanship. The generous space devoted to the dragons, differentiated by size, contrasting those facing the viewer with those shown in three-quarter view, gives the salmon-ground robe a dramatic presence. The Regulations brought the cosmic purpose of imperial rule into sharp focus. The force of court coat iconography, with its carefully arranged pattern of dragons amid clouds above the universal ocean washing against the earth mountain, quickly transcended the political and ethnic priorities of imperial government to become universal symbols of the empire.Bright yellow represents the highest level of imperial power in the Qing Dynasty, this dragon robe is definitely an unique gem.